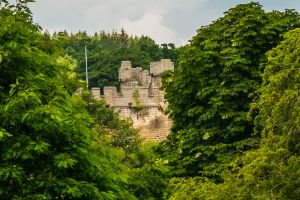 The towers of Bywell Castle from St Peter's churchyard
An 11th-century Norman castle probably built by Guy de Balliol around 1090. The castle stands on the north bank of the River Tyne. The original Norman fortification was later restored and strengthened in the 14th and 15th centuries by the Neville family, with the addition of a curtain wall and gatehouse.

King Henry VI fled to Bywell Castle after his defeat at the Battle of Hexham in 1464. His enemies were close on his heels, however, and when Lord Montague arrived at Bywell he found the king's crown, helmet, and sword, but Henry was nowhere to be found.

The crenellated tower and curtain wall were later built into a 19th-century house. The castle is private property, and not usually open to visitors, but it can be viewed easily from the roadside and the nearby churchyard.

More self catering near Bywell Castle >>