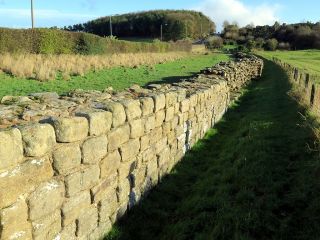 Heddon-on-the-Wall (Hadrians Wall)
A short section of Hadrian's Wall measuring 255 metres in length. The Wall is up to 3 metres wide and stands to a height of 1.7 metres in places.

This section of the wall was probably finished in AD 122 or 123. It is built to the original 'broad gauge' width of 10 Roman feet (2.96m). After 2 years of building this wider gauge was scrapped in favour of a narrower width (which in practice tended to vary between 6 and 8 Roman feet), presumably to complete the building faster.

Much of the Wall immediately west of Newcastle lies under the Military Road, built to aid troop movements in the aftermath of the 1745 Jacobite Rebellion. At Heddon, however, the road takes a short turning to the north.

This turning has left a section of the Roman wall exposed, plus a stretch of the ditch, or valum, on the north side of the wall. The ditch is separated from the wall by a berm; a level area 6m wide. Excavations along the berm have revealed evidence of three rows of pits. Forked tree branches were bent between the pits to form a barrier. As English Heritage remarks, it was the 'Roman equivalent of barbed wire.'

One oddity at Heddon is that the core of the wall was built with mortar rather than the mix of clay and rubble found elsewhere along Hadrian's Wall. It is possible that this mortar was the result of later repair work.

The Wall is visible just off the B6528 immediately east of Heddon village. The Hadrian's Wall National Trail runs a short distance away. 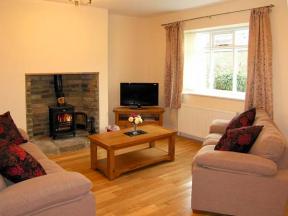 Sleeping up to six people in two bedrooms, this single storey cottage is on a working farm with stunning views, in the village of Heddon-on-the-Wall near Hexham.
Sleeps 4