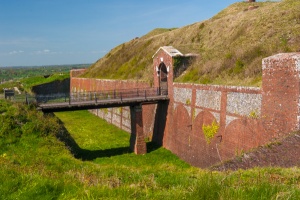 This Victorian fort stands on the crest of Bembridge Down, with fantastic views in all directions. Begun in 1862 as one of a series of forts along the south coast, built to counter the threat of a French invasion.

The forts were called 'Palmerston Follies' after the Prime Minister, Lord Palmerston, and were a subject of ridicule after the threat diminished, and most never saw military action or fired a single shot.

The fort at Bembridge commands the approach to Brading Haven and was meant to barracks for the batteries along Sandown Bay. Bembridge Fort was completed in 1867, at a total cost of almost £50,000. It was built to a hexagonal plan, with a central courtyard, ringed with barrack blocks, and stairs to an upper walkway with gun emplacements. Shafts run from the guns to munition chambers below.

The exterior approach to the fort was defended by a dry ditch, or moat, and earthen rampart. The most striking feature is a series of three caponiers extending into the ditch. These are on two levels, with firing holes on both levels; should an enemy gain the ditch floor, they would be caught in a crossfire between the caponiers.

The guns were removed from Bembridge in the 1890s and it served purely as a barracks and storage depot. It was used briefly in WWI, and by all three arms of the military in WWII. 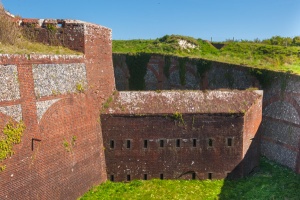 The dry ditch and caponier

After the military finally left, the fort was leased to tenants. By 1998 the interior was dilapidated and full of debris. The National Trust decided to gradually clean up the fort, but making it into a full-scale tourist attraction was out of the question because part of the interior still has industrial offices. For that reason access for visitors is only by guided tour. But that's not a bad thing, for the tours are excellent.

Our family booked a guided tour of Bembridge Fort during a week on the island. It was an inspired choice; the fort, though obviously still being restored by a team of local volunteers, is fascinating. Our guide was a goldmine of information about the history of the fort and how it was used.

We were led through the underground tunnels that run within the walls, through the magazine storage area, and down a steep set of steps to a caponier, looking out into the moat. We carried on to emerge again at a salient overlooking the caponiers, and eventually climbed a stair to the walkway on top of the fort.

This area is crammed with gun emplacements, signalling stations, and equipment installed over the course of a century in use by the military.

I was struck most by the eye-catching system of salient points and caponiers, defending the moat defences. It would have taken a determined enemy to breach these defences. Palmerston's political enemies may have mocked his forts, but this one of 'Palmerston's follies' is a very impressive example of Victorian military architecture.

The location is superb, too, with wonderful views over the surrounding coast and countryside, From the walls, you can make out the National Trust property of Bembridge Windmill, to the east. 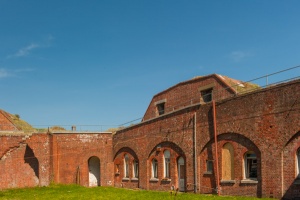 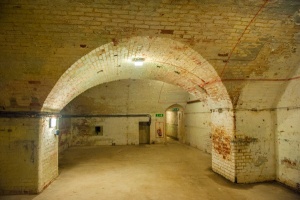 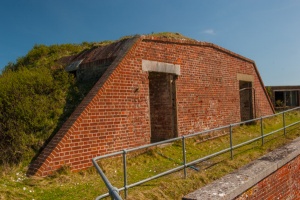 Earth covered position atop the wall 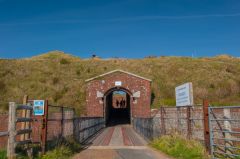 More self catering near Bembridge Fort

Self Catering near Bembridge