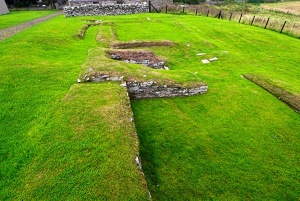 Earl's Bu, Orphir, scene of a murder
in the Orkneyinga saga

The most lasting record of the Norse presence on Orkney comes to us through a saga known as Orkneyinga (sometimes written 'Orkneyingar'). A saga was an account, or oral history, which recounted the genealogy and deeds of Viking warriors. These sagas would have been told at gatherings, recounted for generations after the people in them had died.

The Orkneyinga Saga is one such oral history. It tells the story of the Norse conquest of Orkney and the subsequent rule of the Orkney earls. It was first written down at the turn of the 13th century by an unknown Icelandic scribe.

Sagas tended to follow a predictable format; first and most importantly they laid down the genealogy of the characters. This was important to the intended audience, as they could relate the characters to other saga characters, or perhaps to their own family history.

After the genealogy of the major characters has been set, the Saga tells the tale of the conquest of Orkney by the Norse ruler Harold Fairhair and the subsequent rule of the first Earls of Orkney. Along the way, we are treated to battles, boasts, hard-drinking and violent deeds. There are murders and mayhem, revenge and exiles. In short, it tells the tale of a turbulent world and some of its larger than life characters.

Is it history or fiction?

A bit of both. Certainly, many of the people and events were real, though subject to some artistic license in the retelling. There are some fairly obvious inventions, like the tale of the poisoned shirt that kills the wrong victim, but the saga is loosely based on historical fact.

The Orkney Tourist Board has created an intriguing 'Orkneyinga Trail', with interpretive panels at locations mentioned in the sagas. These panels tell the events that occurred at each location and the background of the sagas. A visit to the Orkneyingar Centre in Orphir is a good starting place for a study of the saga.

The centre has displays about the saga and their historical background, and information about Viking life and culture. Immediately behind the visitor centre is Earl's Bu, the remains of a Norse hall where according to the Orkneyinga Saga murder was done, and the ruins of a 12th-century circular church.