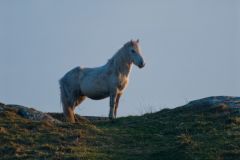 An Eriskay pony surveys his domain
The small island of Eriskay is located at the southern tip of South Uist. For many years it was separated from the rest of the southern isles but the recent construction of a causeway between South Uist and Eriskay has relieved that isolation and opened up Eriskay to visitors. Most visitors are drawn by the association of the island with the novel and film, Whisky Galore.

Whisky Galore
This storey, based on true events, tells what happened when a ship named the Politician ran aground off Eriskay in 1941. The ship cargo included over 264,000 bottles of Scottish whisky intended for New York. The islanders, invoking age-old traditional rights of salvage, er, confiscated much of the whisky.

Unfortunately, HMS Customs and Excise took a dim view of the affair and after an investigation, 19 men were prosecuted for theft and sent to prison in Inverness. The events were later dramatised in a humorous novel by Sir Compton Mackenzie called Whisky Galore, which was then made into a popular film. Both film and novel made light of the events and did not mention the successful prosecution of the islanders.

Another sign of recent heritage can be found at the church of St Michael, where you can find a ship bell from the German battleship Derflinger, sunk at Scapa Flow. Another link with the sea is provided by the unusual altar base, made from the bow of a lifeboat from the aircraft carrier Hermes, lost at St Kilda during naval exercises and washed up on the shore.

Eriskay ponies
Eriskay is home to a unique breed of horse rumoured to be descendants of a herd of wild horses that roamed the Highlands in the prehistoric period. The Vikings prized the Eriskay ponies and took them on board their ships when they sailed to Iceland. The native Icelandic pony is said to be descended from the Eriskay ponies brought by the Norse sailors. Robert the Bruce is also said to have ridden an Eriskay palfrey at the Battle of Bannockburn in 1314. These unique animals almost became extinct in the 1970s but are now once again thriving.

Bonnie Prince Charlie
Eriskay is also closely linked to the romantic and ultimately tragic tale of Bonnie Prince Charlie. On 23 July 1745, the Stuart prince came ashore at Coilleag a Phrionnsa beach, on the west coast of the island, as the first step in his bid for the throne of England and Scotland. One wonders how he felt when he came ashore in this remote place, where he stood on Scottish soil for the first time in his life. Even today his presence lingers, for the story goes that he let fall a few seeds, which eventually took root and flowered, accounting for the blooms of pink sea convolvulus that flourish on the slopes above the beach.

Another romantic link to the island is provided by the enduring song, Eriskay Love Lilt, first written down and published by Marjorie Kennedy Fraser after she visited the island in 1905 to record traditional Hebridean songs and folklore.

History
For many years the island was owned by the MacNeils of Barra, but in 1758 it passed to the MacDonalds of Clanranald. In 1838 Eriskay was purchased by Colonel Gordon of Cluny, who also bought Barra, South Uist, and Benbecula.

Colonel Gordon oversaw the most shameful and desperate period in the history of the southern isles, when thousands of crofting families were evicted from their homes, many making their way abroad to places like Canada and New Zealand. The theory behind these 'clearances' was that the land could create more profit for the laird if it were turned to raising sheep. Some families from South Uist begged to be allowed to settle on Eriskay.

The laird agreed, thinking that Eriskay was too poor to support livestock. The crofters surprised the laird, eking out a difficult living by planting 'lazy beds', peat fertilised with seaweed to create soil for growing potatoes and grain. These ingenious raised beds enabled the small population to survive until a boom in the herring fishery in the late 19th century led to an increase in population.

In 2001 Eriskay was joined to South Uist by a new causeway, finally ending the isolation of this remote and beautiful island. Eriskay is only 2.5 miles long and 1.5 miles wide, making it ideally suited to exploring on foot. One nice walk runs from the end of the road east of Haun to the ruins of a deserted village at Roisinis.

Like other islands in the Uists, Eriskay is roughly divided geographically on a north/south axis. To the east is the higher ground, represented here by the low hills Beinn Screin (610 ft) and Beinn Stack (403 ft). To the west the ground falls away to machair; sandy grassland and dunes. The soil is poor and ill-suited to any form of agriculture, so traditionally the islanders have lived by fishing. Since there was no peat cutting on Eriskay; islanders would make an annual passage to South Uist and there cut enough peat to last the winter.

Editor's note: I absolutely loved Eriskay. Though small in size, there was just something magical about the island; perhaps some lingering echo of a long and difficult history mixed with a healthy dose of romance and fabulous scenic beauty. It is one of the most beautiful of all the Scottish islands I've had the pleasure to visit, and I look forward to returning. 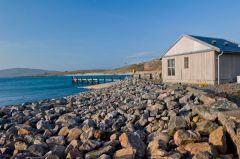 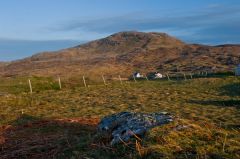 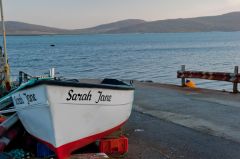 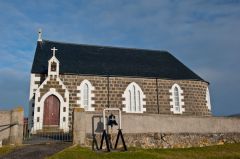 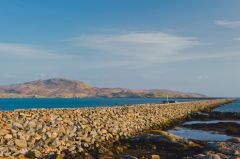 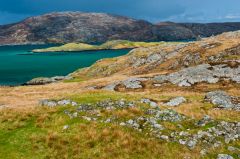 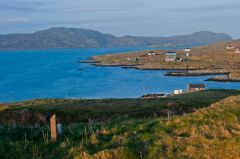