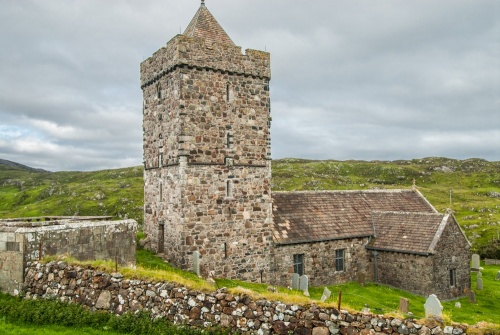 The church of St Clements at Rodel is probably the finest late medieval church in the West of Scotland. Rodel is famous for the superbly carved tomb of Alexander MacLeod of Harris (d. 1547), depicting hunting, sailing, and religious figures. There are also three tombs of knights and 16th-century grave slabs carved from gneiss.

It is the tower that you notice first as you approach the church; it seems to rise out of the surrounding landscape like a beacon. The church is built to a cruciform plan, with a west tower, and a choir and sanctuary at the east end. There are additional chapels off the south and north transepts.

What makes Rodel so interesting from an architectural point of view is that most of the church was constructed within a short period of time, roughly 1520-1550. St Clement's must have been completed just as the Reformation swept Scotland, so it was probably in use for worship for a very short period of time. Despite that, the churchyard was used for burials by the MacLeod's for centuries.

The church itself, though, suffered from neglect, and by the 18th century, it stood roofless to the sky. Captain Alexander MacLeod of Berneray had a new roof built in 1784, but that burned down almost immediately after it was finished. Captain MacLeod persevered, and the roof was rebuilt once more in 1787. Once again decay set in, and the church had to be restored once more in 1873 under the patronage of the Dowager Countess of Dunmore. 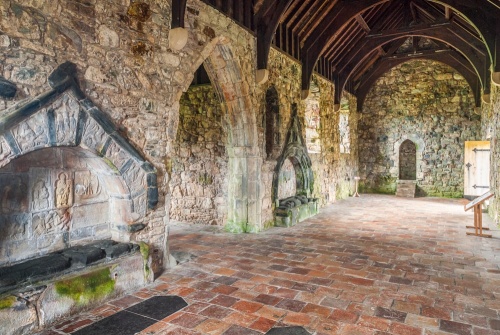 According to an account by Dean Munro in 1549, the builder was Alexander MacLeod of Dunvegan and Harris, known as Alexander Crotach. Crotach loosely translates as 'humpback', a reference to a wound sustained by MacLeod during a skirmish with the MacDonalds of Skye. MacLeod, who died c. 1545-7, is commemorated by an impressive tomb on the south side of the choir.

You might scratch your head on viewing the tomb, however, as it bears the date 1528. We can guess that the earlier date is when the tomb was complete, during Crotach's lifetime. It was a common practice among the nobility to prepare a grand tomb for themselves, and Alexander appears to have followed this practice, as did his son, William, who succeeded him as clan leader.

In 1539 William prepared his own tomb in the south wall of the nave, where he was laid to rest on his death in September 1551. The third impressive tomb at Rodel, also in the south transept, is that of John MacLeod of Minginish (d. 1557), who followed William as clan leader. 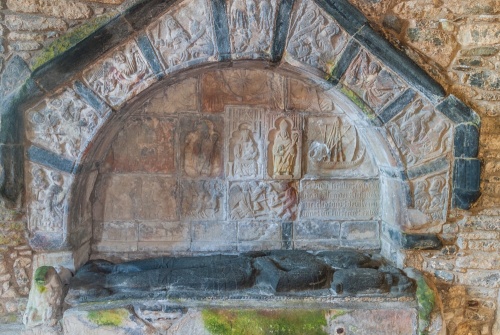 Historic Scotland, who look after Rodel church, call Alexander MacLeod's tomb, 'the finest ensemble of late medieval sculpture to survive anywhere in the Western Isles'. I can see why; it is a wonderful, compelling memorial with striking carving. The tomb is composed of a gabled niche housing an effigy of the deceased knight, carved of black gneiss.

The decorative carvings deserve a few notes; at the apex of the arch are symbols of the Trinty, surrounded by the four Evangelists, in turn, flanked by the 12 apostles. with two censing angels.

Under the arch is a sun flanked by angels, and below this are the Virgin Mary and two bishops. One of the bishops carries a skull and is identified as St Clement, to whom the church is dedicated. These figures are flanked by a castle and a galley. The castle is thought to be Dunvegan, on Skye, and together with the galley are thought to represent the MacLeod clan. 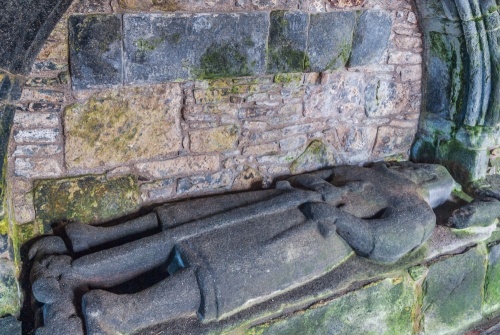 At the bottom of the tomb is a hunting scene, with a knight chasing three stags. To one side of this early scene are St Michael and Satan weighing souls. This is followed by a Latin inscription which translates as 'This tomb was prepared by Lord Alexander, son of William MacLeod, Lord of Dunvegan, in the year of Our Lord 1528'.

It is hard to adequately describe the interior of Rodel church; it is almost completely devoid of furnishings, which leaves your eye to wander immediately to the utterly compelling MacLeod tombs. To say that the church is atmospheric is to do it a major disservice! It is exquisite, poignantly perfect for the Western Isles, a moving memorial to a long, sometimes harsh, and very rich heritage.

Nearby accommodation is calculated 'as the crow flies' from Rodel, St Clements Church. 'Nearest' may involve a long drive up and down glens or, if you are near the coast, may include a ferry ride! Please check the property map to make sure the location is right for you.