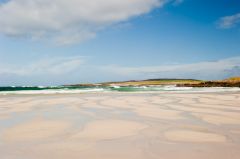 Benbecula is tucked in between North Uist and South Uist like the filling of a sandwich. The island has a completely different character to its neighbours, being largely flat, whereas both the Uists have sizeable hills on their eastern sides. There is only one hill of any note on Benbecula, and that is Rueval, set pretty much in the centre of the island.

There is a wonderful walk leading from the main A865 road to the summit of Rueval, where, it is claimed, you can see over 90 lochs on a clear day. The trail continues on from Rueval to the coast near Rossinish, where Bonnie Prince Charlie escaped 'over the sea to Skye', with the aid of Flora MacDonald.

Reminders of the prince's romantic escape to eventually freedom is everywhere. Nunton House, south of Balvanich, was where the prince supposedly dressed as Flora MacDonald's female servant in order to escape detection. The house stands almost directly opposite the Nunton Steadings community centre and south of Nunton Chapel and burial ground. It is one of the oldest and most historically important buildings on Benbecula.

Though much altered over time, the core of the house is much the same as it was in 1746 when Flora MacDonald, visiting her brother, was persuaded to help Prince Charles Edward Stuart escape from his pursuers. From Nunton House the prince left for Rossinish on the coast, where a ship took him to Skye and eventual safety. Nunton House is a private dwelling, and not open to the public, but can easily be seen from the road.

Nunton House stands near the ruined 14th chapel of a nunnery that may have its roots in the earliest days of Christianity in Britain.

South of Nunton is the ruin of Borve Castle, a 14th-century fortress built by Clanranald. There's not a lot left of the castle, but what there is can easily be viewed from the coastal road.

Near the northern tip of the island at Gramsdale, where the causeway leads to North Uist, is a small stone circle, and the ruin of a second. 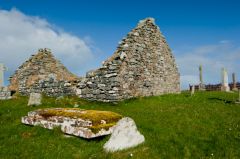 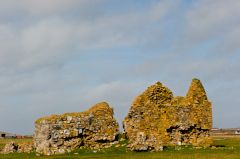 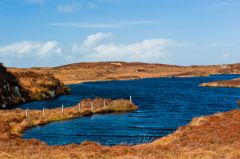