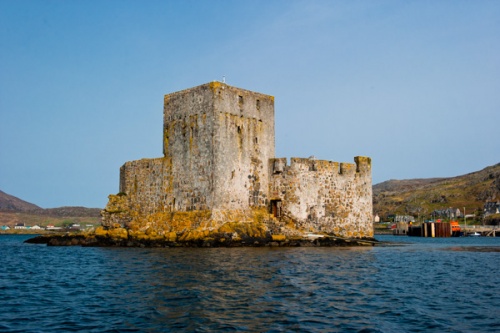 The Gaelic name for Kisimul Castle is Caisteal Chiosmuil, which loosely translates as ‘castle of the rock of the small bay’, which pretty well describes this scenic medieval fortress, perched on a rocky islet at the entrance to Castle Bay, Isle of Barra. Kisimul was the seat of the chief of the Macneils of Barra.

According to tradition, the first Macneils came to Barra in the 11th century, but the first historical record of a clan chief here comes from 1427, when Gilleonan Macneil was granted the island by Lord Alexander MacDonald, Lord of the Isles. It was probably he who built Kisimul on the rocky island, with a small crew house beside the castle for his personal crew and galley.

The Macneils retained Barra until 1838 when they were forced to sell the lordship to repay heavy debts. In 1937 a descendant of the Macneils of Barra, Robert Lister Macneil, the 45th Chief, purchased the estates once more and set to work restoring the castle. In 2000 Kisimul passed into the hands of Historic Scotland, who maintain the site today.

Most of the castle dates to the 15th century. It is built as a three-storey tower house surrounded by a curtain wall. Within the wall is a courtyard enclosing secondary buildings including a chapel, feasting hall, watchman's house, and heir's house (called a 'tanist'). 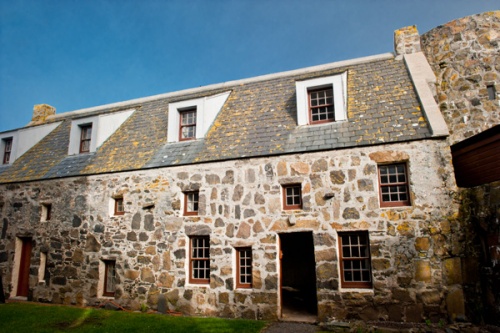 Near a postern gate is a small well fed by an underground stream. The foundations of the 15th-century crew house can be seen beside the landing place. This was occupied by the sailors who served on the chief's galley.

Kisimul is open during Spring and Summer months, with access from via a small boat from Castlebay. This is a 5 five minute trip, weather permitting.

This has to be one of the most enjoyable historic sites to visit in all of Britain. The location in the middle of the bay is just stunning. There is regular boat service to the castle from the jetty, and you can purchase tickets from the nearby tourist information centre or at the castle after you've made the boat trip.

The name Kisimul is pronounced with a 'sh' sound, giving something vaguely like 'Kishmule' - Gaelic speakers take pity on my pronunciation guide! It is a small site, but it is amazing how much the MacNeills managed to cram into this little island.

You start your tour in the Tanist, or Heir's House, the most [relatively] recent addition to the site, which now acts as the ticket office and shop. There are a parlour and bedroom upstairs, furnished extremely simply. From there you can walk across the small courtyard to the kitchen, which was originally on two levels but now only the ground level is accessible.

Cross the courtyard to the hall, the centre of life in the castle. This was a multi-purpose area for castle life, used for dining and doing business. At one end is a large fireplace topped with a huge MacNeill coat of arms. At the other end of the hall, a collection of rifles is set upon the wall. These were gathered after the Battle of Culloden in 1746.

You can climb the stairs at the rear of the hall to access the battlements, and from there climb to the top of the tower, the oldest part of the castle. Beside the tower is St Kieran's Chapel, used as a MacNeill burial vault. There are small tablets to generations of MacNeills on the wall, and a huge floor monument to Robert MacNeill, the 45th chief, who died in 1970. On the wall is a much more sedate monument to Henry Slack MacNeill (1917-1983), who did so much to restore the castle.

And that's it; you're done. As I said, it isn't a large castle, like, say, Edinburgh or Stirling, but my goodness it is atmospheric, and the location in the bay makes a trip to Kisimul one you won't soon forget. 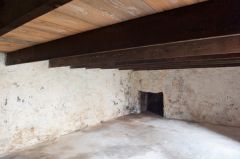 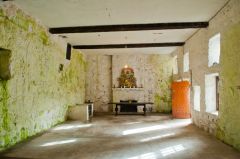 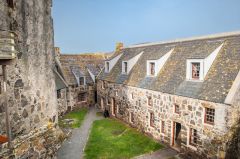 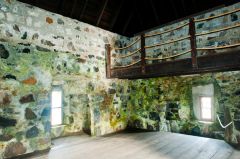 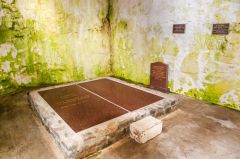 Nearby accommodation is calculated 'as the crow flies' from Kisimul Castle. 'Nearest' may involve a long drive up and down glens or, if you are near the coast, may include a ferry ride! Please check the property map to make sure the location is right for you.

More self catering near Kisimul Castle >>