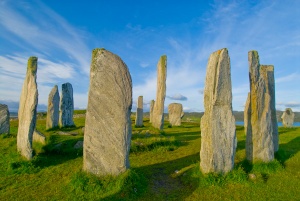 About the Western Isles (Outer Hebrides)

The term 'Outer Hebrides' applies loosely to islands off Scotland's west coast, but more accurately it takes in what is now called The Western Isles. The Western Isles stretch for 125 miles (210 km), and the isles of Lewis and Harris are the largest islands in the group, which includes North and South Uist, Bara, St Kilda, and more.

Curiously, given their far northern location, the Western Isles are a haven for surfers, offering some of the best water activity locations in Britain, with mile after mile of white sandy beaches, especially on the west coast.

You can't mention heritage and the Western Isles without thinking of the stone circle at Callanish (Calanais). Perhaps second only in archaeological importance to Stonehenge, Callanish is a fantastic prehistoric monument composed of radiating avenues of stones about a core central circle.

The stones stand in a marvellous location above Loch Rog an Ear, and if you are fortunate enough to have watched the sun set beyond the loch and paint the stones with a golden light you will never forget it. It is quite simply one of the most extraordinary historic monuments you will ever see, in a stunning location of the sort that the Scottish islands seem to specialise in. There is a modern visitor centre just below the hill on which the stones stand.

Callanish is not the only ancient site on Lewis; just a short drive away is Dun Carloway, one of the best-preserved brochs in Scotland. There is also a stone circle - albeit much smaller than Callanish - at Steinacleit, and a huge monolithic standing stone at Tasuil.

If you want more modern history, journey to the ruined church at Rodel, on the very southern tip of Harris, which boasts wonderful stone carvings. Or head north to the tip of Lewis, where the lighthouse at the Butt of Lewis marks what is said to be the windiest place in Britain (it wasn't actually that bad when I visited).

At Bostadh is a reconstruction of an Iron Age hut that was found buried beath the sand for centuries, and at Garenin is the Blackhouse village, a collection of traditional Hebridean cottages now restored as a fascinating museum of local life. Another restored cottage stands at Arnol.

Then there's the 'Bridge Across the Atlantic', so named because it links the Lewis mainland with the island of Great Bernera across a strait linked directly to the ocean.

There are ancient sites throughout the isles, primarily standing stones and chambered cairns. A more relatively modern (though ruined) site is Flora MacDonald's birthplace at Mingearraidh (Mingarry) on South Uist, and the ruined medieval castle of Kisimul stands offshore at Castlebay, Barra. 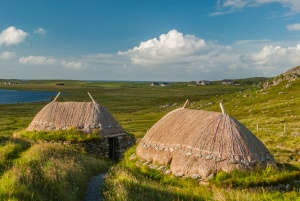 Norse Mill, Lewis
We can't talk about heritage in the Western Isles and not mention the little island of St Kilda. The island is practically a world unto itself, a remote enclave with a unique lifestyle based around hunting bird eggs with long poles, along almost sheer cliffs. The last villagers departed St Kilda decades ago, but now the islands welcome limited numbers of tourists to experience this Hebridean treasure for themselves.

Visiting the Western Isles
If you've never been to the Hebrides before you may have a vague vision of a bleak and desolate wasteland, where the wind howls and the seas are storm-tossed. Nothing could be further from the truth.

The Hebrides are an extraordinarily beautiful region of magnificent scenery, historic sites, romance, and some of the best beaches in the world. Isolated, yes, by virtue of their location off the north-west coast of Scotland, far from major transportation routes, but also far from some of the 'features' of modern civilisation like overcrowding, impersonal cities, and a harum-scarum lifestyle. Here you will find that life moves at a different pace, a quiet pace, in tune with the vagaries of weather and climate, geography and seasons. A place where the past is always present.

Gee, that sounds very poetic; more to the point, the Hebridean islands are great to visit. I've had the pleasure of visiting all the major and most of the minor islands, and have enjoyed every minute. Well, almost every minute.

Weather
According to a tourist brochure I read for Berneray, the Hebrides enjoy more sunshine than many places on the mainland. While that may be true as a general rule, it certainly isn't something you can count on. This is Scotland, and the weather changes frequently, abruptly, and with sometimes alarming speed. Like the old Boy Scout motto says, 'Be Prepared'.

If you think you're verging on overkill, you've got it about right. Waterproof footwear is an absolute must. No matter how solid the ground looks, it probably isn't, and there's nothing quite like that alarming feeling of your foot sinking deep into a watery mire that was hidden amid the moss and peat to make you wish you'd worn rubber boots. You have been warned! 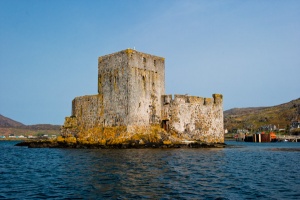 Now with all that out of the way, let me reassure you; the weather can be quite spectacularly gorgeous, with long, golden evenings and extraordinary sunsets. And it can also be windy. Very windy. The Butt of Lewis is said to be the windiest place in Britain, and the number of wind turbines used for generating power throughout the Western Isles makes it clear that using the wind is an economical choice for creating electrical power here. Draw your own conclusions from that fact.

Midges
Now, you may actually prefer the wind during the summer months, for when the weather is damp and humid, midges multiply. Ah, the midge; what can one say about Scotland's national pest that hasn't already been said - and at high volume, by countless visitors. Lets put it this way; the best, and I mean best by far, 4 pounds I have ever spent in my life was on a simple nylon midge hat, like a mesh bag with a drawstring that I could pull tight under my chin.

People who claim that you can't buy peace of mind have never had the incredible satisfaction of pulling on a midge hat and letting the little blighters make all the fuss they want. Now, you can actually be relatively free of midges if you keep moving at a nice, easy pace. Just be aware that the moment you stop, you will be swarmed. And bitten. Repeatedly. Now with all those dire warnings, let it be said that I would never, ever let a fear of midges stop me from visiting the Highlands. Mind you, I usually time my visits for early Spring or Autumn, outside the main summer midge season!

The major Islands of the Western Isles (roughly north to south): 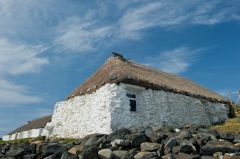 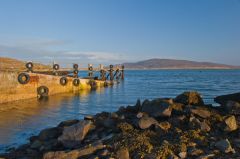 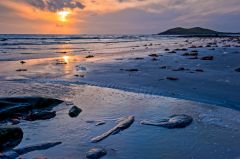 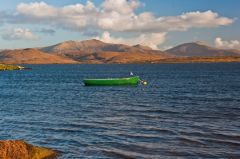 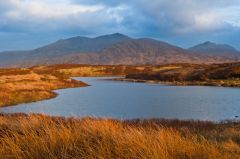 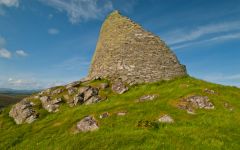