Bransgore parish is large, taking in the neighbouring village of Thorney Hil and the scattered hamlets of Waterditch, Hinton, Neacroft, Beckley, and Godwinscroft. The village stands on the north bank of the River Mude. 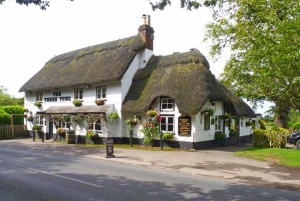 The name comes from a combination of the Middle English 'gore' meaning a triangular plot of land, and the Saxon 'Bran', a proper name, so Bransgore means a triangular piece of land belonging to Bran. The plot of land is thought to be the area at the western end of Burnt House Lane.

An unfounded tradition says that the village name comes from a combination of 'brains' and 'gore' and refers to a bloody battle fought by King Alfred the Great near this spot. Indeed, so prevalent was the tale that the Ordnance Survey marked the site of a battle on their maps. Sadly, however, there is no truth to the tale, and there was no battle. 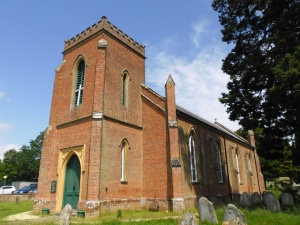 The village grew up in the 18th century. The first documented evidence of the names comes from the 1730s. In 1759 the village was called Bransgoer Common and by 18190 the name had evolved to become Bransgrove. Over the past two centuries, the ending 'grove' and changed to 'gore'.

The oldest buildings in the village reinforce its 18th-century origin. The thatched Three Tuns dates to the Georgian period, though it was altered following a 20th-century fire. At the crossroads in the village centre stands the village's other inn, The Crown.

Another restoration followed in 1905 when Harold Peto was called in to remodel the interior. Peto is most widely known for his garden design, particularly his own gardens at Iford Manor, near Bradford-on-Avon, Wiltshire. The house is normally closed to the public but the gardens can be visited by arrangement. 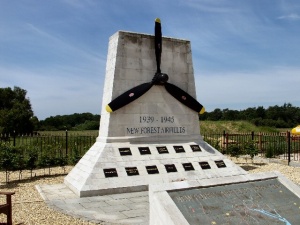 The parish church, dedicated to St Mary the Virgin, was built in 1822 on the southern edge of the village. The church was designed by the architect J Hannaford. It holds a 16th-century font thought to have been brought here from Christchurch Priory. The font bowl has bears the initials JD, thought to represent John Draper, the Prior of Christchurch in 1509 and the last Prior to hold the office before the Dissolution of the Monasteries.

The church was one of the 'Million Churches' erected in the 1820s. The name comes from the fact that the English government forced the French to pay reparations for the Napoleonic Wars. One million pounds was set aside to build new churches. The total cost of St Mary's was £1,500.

Perhaps the most famous vicar of Bransgore was Rev Henry Wilberforce, the son of the anti-slavery campaigner William Wilberforce. Rev Wilberforce founded the first school in Bransgore opposite the church in 1840.

After a new National School was built in 1895 the older building was remodelled as a School Room and Church Cottage. The School Room was used as a Free School (for students whose parents could not pay the 2d per week required to attend the regular school). both buildings are now private residences.

The Bransgore area was known for its brick-making industry in the Victorian period. You can still see evidence clay pis and spoil heaps in the region. Clay extracted here was used to manufacture bricks for the expanding coastal town of Bournemouth.

Bransgore is on minor roads off the A35 north of Christchurch.

More self catering near Bransgore

More bed and breakfasts near Bransgore