Alfred the Great and the Danes 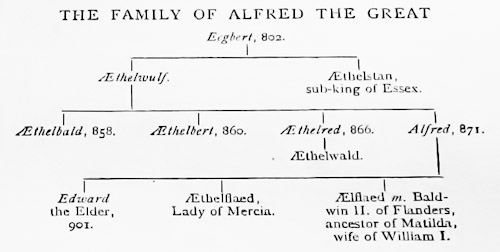 The Year of Battles
Heavy Danish reinforcements had come up either before or after the battle of Basing, and the king was defeated in his first engagement with them at Wilton. Both sides must have suffered tremendous losses during this "year of battles," and Alfred was reduced to buying a short respite; a dangerous policy but one at the moment inevitable.

For the next four years the Danes devoted their attention to Mercia and Northumbria. The latter was completely subjugated by the Northmen, and thenceforward Northumbria was as much Danish or Norse as Anglian; for although the Danes did not exterminate they took possession of as much of the land as they chose, though they do not appear to have settled to any extent in the old Bernicia.

But half the Danes left Northumbria to the other half and for the time being dominated East Anglia and Mercia; and these, recruited by fresh Viking bands, again in 876 turned to the invasion of Wessex.

Alfred's Navy
Meanwhile Alfred had been making use of the time allowed him. He had started the nucleus of a navy which should be able to challenge the invaders on the element which they regarded as their own; and we may presume that he had also been reorganising the military forces of Wessex after the destructive struggle of 871.

When the Danes struck they struck hard, suddenly, and without warning, burst across Wessex, and seized and fortified a strong position on the Dorsetshire coast, where they could be Joined by their kinsmen from Ireland. Alfred however, blockaded them on the land side with a force which they did not choose to engage.

The Danes agreed to accept what may be called a ransom as before, but did not keep faith; a large force, being well mounted, broke through the English lines by night and hurried to Exeter, where they fortified themselves. Alfred could carry neither of the Danish posts, nor could he concentrate before one of them, since that would have left Wessex to be devastated by the other.

In the spring, however, the Vikings in Dorset took to the sea, meaning to join the force at Exeter; but the fleet was fortunately annihilated by a storm. Hence the army at Exeter, a sufficiently formidable force in itself, offered after some delay to retire, and was permitted to do so without reluctance.

However they only withdrew into Mercia, where they had allowed an English ealdorman to enjoy the title of a sub-king. They now deprived him of half his territory, as much, that is, as lay beyond Watling Street, the great road running from London to Chester; and just as the army had before divided, one half remaining in Northumbria and settling it, while the other half abode in the south and prepared for further conquest, so now a considerable proportion of the army seems to have turned to the business of settlement; while the balance, led by Guthrum, prepared to renew the war in Wessex in conjunction with a force from over the Irish Sea.

Alfred's Success
Again the move was made suddenly and without warning, this time in the dead of winter, when no one was dreaming of military movements. So effective was it that Alfred himself had to take refuge in the marsh, surrounded isle of Athelney, and it was some months before he could concentrate a force which could again take the field against the main Danish army.

A desperate battle followed at Ethandune or Edington, when Alfred's victory was decisive. Guthrum made terms, and this time the terms were honourably kept. He himself embraced Christianity with many of his followers, and withdrew all claim to that part of Mercia south-west of Watling Street; and it was agreed that the Danes should remain undisturbed in the settled district beyond, henceforth known as the Danelagh.

This was the Peace of Chippenham or Wedmore, 878, which left Alfred free to organise his kingdom. The agreement, with some modification, was confirmed some years later in 886, when the Danes had broken out in spite of their pledges and Alfred had struck some hard blows in return, including the capture of London and its transference to Wessex Still Alfred had not yet done with the Danes.

It must be borne in mind that ever since the middle of the century the Danish forces in England had merely formed a portion of the organised host of Northmen, who had ceased to be mere desultory raiders and had set out upon a career of conquest on the south no less than on the north of the Channel.

Alfred's arrangements with Guthrum effected a settlement only as far as concerned the Danes in England. But the great army met with a severe check on the continent at the hand of the Emperor Arnulf, and, as a consequence, it again turned its attention to England in 892, in conjunction with the great Viking Hasting.

By this time, however, Alfred's organisation of Wessex had been completed. The Danes of the Danelagh gave not much active help to their kinsfolk beyond providing them a friendly reception in their own territory. Alfred's newly created fleet proved a satisfactory match for its opponents, and most of the hard fighting was done in Mercia.

In fact, the Danish host now found that the king of Wessex was not fighting desperately at bay, but was consistently the victor. At any rate, they were fairly beaten out of Alfred's own dominion, and either went home or joined their kinsmen in the Danelagh.