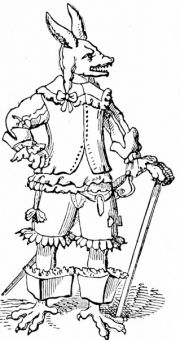 The Cavalier as 'England's Wolf', from a parliamentarian broadside of 1646

Oliver Cromwell
The man who discovered the inspiration of which the Roundhead armies stood in need [in 1643] was Colonel Oliver Cromwell, who had distinguished himself as a cavalry officer at Edgehill. Since that time he had not been prominent in the field, but had been preparing for great achievement by organising the Eastern Counties in such fashion as to render any Royalist movement there a sheer impossibility.

Nominally as the sub­ordinate of the Earl of Manchester, he set himself to the task of raising regiments imbued with a spirit which would make them a match for Rupert's gentlemen, and with a discipline which would give them a decisive superiority. In officers and men the great desiderata, according to the civilians assembled at Westminster, were respectability and orthodoxy.

Cromwell wanted men who were full of enthusiasm for the Cause, and ready to submit to the severest discipline. For their orthodoxy he cared not a jot, though he required that they should be men of religion and of moral austerity. Given these conditions, military fitness was the sole quality he required in his subordinate officers. Out of such chosen material he constructed those picked regiments which under his leadership were to become the best troops in Europe.

A first taste of their quality was given at Winceby fight, when a Royalist force had passed the Humber and entered the Eastern Counties before the end of 1643. That fight enabled him to relieve Hull, the one point in Yorkshire where the Fairfaxes, besieged by Newcastle, were still holding out.

Marston Moor
His time had not yet come, but early in the year (1644) the Scots commanded by old Alexander Leslie, Earl of Leven, and his distant kins­man, David Leslie, had crossed the Border. With this new enemy, New­castle was no longer able to maintain his grip on the North. In April he was obliged to throw himself into York, where he was pressed by the Scots and by the Fairfaxes from Hull. In the south the defeat of Hopton at Cheriton removed immediate anxieties, and the army of the Eastern Counties Association under Manchester, with Cromwell as his cavalry chief, prepared to invade the North.

Marston Moor shattered the Royalist force on the north, and it established Cromwell as the first cavalry leader of the day. He had routed the hitherto irresistible Rupert, and he had shown a quality which Rupert never possessed, that of maintaining a perfect control over his troops in the moment of victory.

Rupert, as a rule, swept all before him, but his men were not held in check, and continued a furious pursuit or turned to pillaging. Cromwell's Ironsides drove their opponents in rout, halted, re­formed, and were again launched on the flank or rear of the adversary. Long ago the son of King Henry III had been taught the great principle of cavalry fighting, to his cost, at Lewes, and never repeated the blunder which lost him that battle.

Cromwell himself had applied the principle, as Rupert had ignored it, in the first pitched battle in the war at Edgehill; but Rupert and the gallants of England never learnt the lesson, and the Cavaliers paid the penalty in full measure at Naseby fight, within a year of Marston Moor.

If the Ironsides and the Scots had won the North of England, elsewhere matters were by no means going favourably for the parliament. Hopton's defeat by Waller at Cheriton gave the parliamentary generals an oppor­tunity for taking the offensive against the king, who fell back to Worcester.

But Waller and Essex made the blunder of dividing their forces, the fort remaining to deal with Charles, while the latter marched into Devon in hope of recovering the West country. Thus, a few days before Marston Moor, Charles was able to rout Waller at Cropredy Bridge, and marched south-west in pursuit of Essex.

At Lostwithiel, in Cornwall, the parliamentary General-in-Chief was surrounded by a superior force, and though he was able to cut his way through with his cavalry, and himself to escape by sea, the bulk of his force was compelled to capitulate. The Royalists were again undisputed masters of the West.

Manchester failed in his task, to the bitter indignation of his second in command. He intercepted Charles at Newbury, and ought to have crushed him, but, though victorious in the battle, he allowed the Royalist army to escape past him, and, by refusing to press on its heels, allowed the king to rally his scattered forces. The moment for crushing him was lost.

Scotland
Meanwhile events took a new turn in Scotland. The party of Argyle was completely predominant in the Lowlands, but the best troops and the best commanders were all engaged in England. Argyle himself, though an astute politician, was no soldier. The Highland clans had hitherto taken little part in the troubles which did not practically concern them, but to many of them the clan Campbell and its chief were, extremely obnoxious.

Advantage was taken of the state of feeling in the Highlands by Montrose, whose loyalty had been rewarded by a marquisate. Joined by Alastair Macdonald of Islay, at the head of a half-Scottish force from Ireland, he raised the royal standard in the North, and routed the troops of the Scottish Government at Tippermuir, following up his first success by the capture of Aberdeen; which was dealt with in a merciless fashion,' strongly contrasted with Montrose's treatment of the same city when he had captured it for the cause of the Covenant five years before.