HERITAGE HIGHLIGHTS:   A real London landmark, to a design by Sir Christopher Wren. 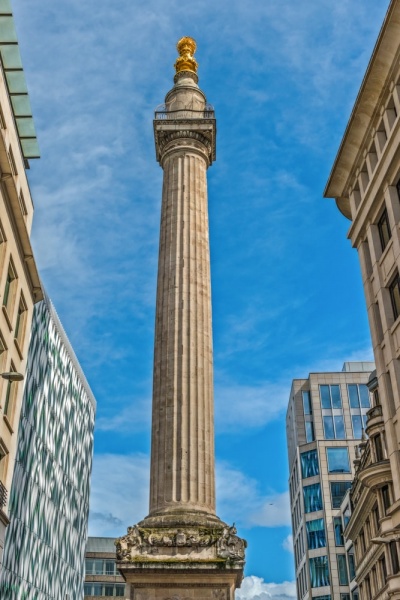 After the devastation of the Great Fire of London in 1666, Parliament passed a law that a monument should be erected on or near the place that the fire started at a bakehouse in Pudding Lane. To this end, Sir Christopher Wren was retained to design a column, or pillar, to commemorate the fire and the great losses incurred by the city. The result is the London Monument, or, as it is more properly termed, simply 'Monument'.

Wren collaborated with Robert Hooke to create several designs, including one with the figure of a phoenix rising out of gilded flames. Another proposal had a statue of Charles II atop a high column, but Charles declined the honour, feeling that the citizens of London might associate him with the awful devastation of the fire. His actual words were, apparently, "I didn't start the fire".

Eventually, a much simpler design was approved, of a classical Greek column using the Doric order, with a flaming, gilded bronze urn on top.

The column was erected on a site at the junction of Fish Street Hill and Monument Street, and the height of the column (202 feet) was exactly the distance from the base of the Monument to the site of the bakehouse on Pudding Lane where the Great Fire began.

The Monument is built of Portland stone, and it took six years to complete (1671 - 1677). It is the tallest free-standing column in the world. An observation balcony stands beneath the urn, and this balcony can be reached by climbing a spiral staircase with 311 steps.

The square plinth at the bottom of the Monument is inscribed on three sides with Latin verse. The fourth side has an allegorical frieze by Caius Cibber, depicting Charles II in Roman garb, directing operations to rebuild the city. 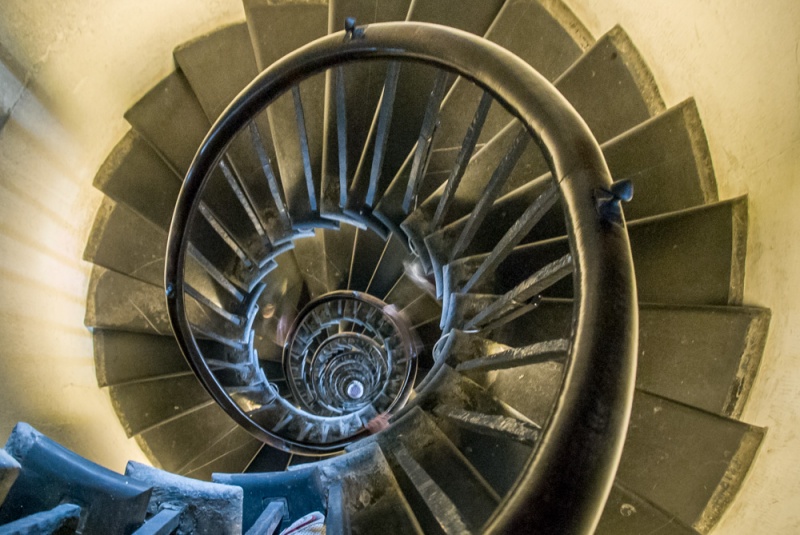 The spiral stair inside the Monument

The story of the Latin inscription is an interesting one; the original inscription made no mention of the popular belief that the Great Fire was started by Catholic sympathizers. But in 1681 a sentence was tacked onto the end of the inscription that read, "But Popish frenzy, which wrought such horrors, is not yet quenched." This phrase was obliterated in 1831 when anti-Catholic sentiment was not quite so severe!

As a sidenote to the anti-Catholic sentiment, the Museum of London displays a stone plaque from the Pudding Lane bakery site, erected in 1681. The plaque blames a Catholic named Robert Hubert, and Catholics in general, for starting the fire. The plaque was removed from Pudding Lane in the middle of the 18th century because of traffic jams caused by passers-by stopping to read the inscription, which says,

Here by permission of Heaven, Hell broke loose upon the Protestant city from the malicious hearts of barbarous Papists, by ye hand of their agent Hubert, who confessed, and on ye ruines of this place declared the fact, for which he was hanged (vizt) that here began that dredful fire, which is described and perpetuated on and by the neighbouring pillar.

Erected Anno 1681 in the Mayoraltie of Sir Patience Ward Kt. 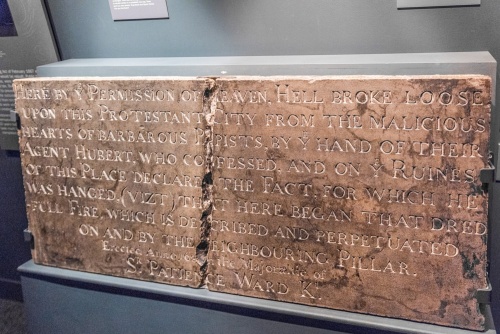 The Royal Society thought that the Monument made a perfect location from which to conduct scientific experiments, but they were soon driven away by noise and vibration from the traffic below.

Between 1748 and 1842, six people committed suicide by throwing themselves off the top of the Monument. After the last of these unhappy incidents, an iron latticework cage was constructed around the balcony to prevent further attempts.

The Monument was renovated in 1834 and again in 1954 following bomb damage in World War II.

Visitors can ascend the Monument for a small fee, and receive a certificate of achievement for their exertions (I've got mine!). The views over the rooftops of the city are quite superb, and well worth the climb. 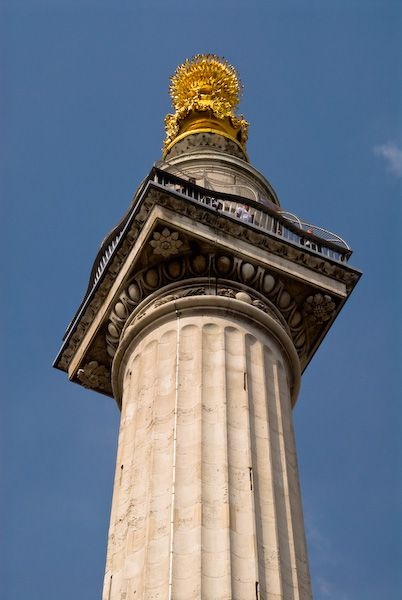 The top of the Monument 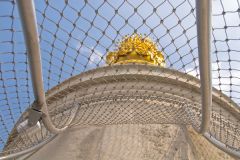 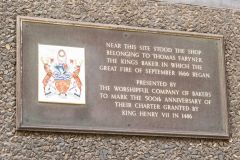 Note: You can get Free Entry to London Monument with the London Pass

More self catering near London Monument >>