Titus Oates and the Popish Plot

Navigate 'A History of the British Nation'
<< Tories and Whigs, the beginnings of party politics - Popish Plot - The Habeus Corpus Act >> 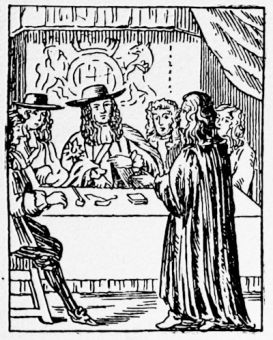 'Dr Oates discovereth the plot to ye King and Council', from a 17th century playing card

So far the country party [the Whigs] had been baffled. They had been unable to obtain either the overthrow of Danby or the dissolution of the parliament which had been sitting for seventeen years. Although the Triennial Act of the Long Parliament was in force, requiring that the Houses should meet at least every three years, there was no statutory provision limiting the time during which a parliament once summoned might remain undissolved.

The Popish Plot
Nor were the Opposition now (1678) provided with any really effective cry for attacking the Government. Failing aid from the High Gods, they moved the Powers of Acheron, or the Powers of Acheron moved on their behalf. Charles learnt that the ordinarily sober English people were capable of going perfectly mad on one subject, and that subject was Popery. With singular opportuneness for Shaftesbury, the No Popery frenzy laid sudden grip upon the nation. Titus Oates invented, and, having invented, revealed the popish plot.

Oates was an unspeakable knave who, being the son of a Baptist minister, had himself disgraced the Anglican Church by taking Orders, and had then joined the Church of Rome. Among the Jesuits he had gleaned enough to suggest to him the fabrication of a portentous and elaborate lie, having in it a leaven of truth, just sufficient to save it from immediate detection.

The Jesuits had given up hope of the conversion of England by Charles, and were fondly anticipating the accession to the throne of his brother James, who had long been an avowed member of the Roman Church. Incidentally, Oates ascertained that a Jesuit meeting had been held on April 24.

The accusations
Oates proceeded to lay information before the king of the Jesuit plot for his murder. The city of London was to be provided with another great fire, Ireland was to be roused to insurrection, French troops were to come over, and there was to be a general massacre of Protestants. A copy of this declaration was lodged by the informers with a magistrate of the highest character, Sir Edmund Berry Godfrey.

Oates was summoned before the Council, and stuck to his statements, though the king at least was perfectly satisfied that he was lying. Private papers were seized which implicated Father Coleman, who was officially the secretary of the Duke of York's wife, in what was certainly treasonable if futile plotting. The papers confirmed some of Oates's statements and were consequently regarded as proving his veracity. In the wild panic which ensued, every lie produced by every informer was swallowed with avidity.

Godfrey murdered
Godfrey was found murdered in a ditch, and though nothing was ever proved, the frenzied public assumed that he had been murdered by the Jesuits. Catholics and suspected Catholics were swept into prison and condemned to death after a mockery of trial. Nobody dared to raise hand or voice in an attempt to check the popular rage.

A bill was carried and received the royal assent for the exclusion of Catholics from the House of Peers, the Duke of York alone being excepted by a bare majority of two votes. A direct attack on the succession of James was only evaded by the king's assurance that he would accept restrictions of the prerogative for a successor who was not a Protestant — for which James never forgave Danby.

Then in order that the king might marry again a wife who might bear him a son and so shut James out of the succession, Oates brought a charge against the unlucky queen and her physician of attempting to poison Charles, which was probably instigated by Shaftesbury. But Charles drew the line at this monstrous accusation against the wife whom he so shamelessly wronged. The charge against her was dropped, and the Chief-Justice, with the help of a conscientious and valiant jury, acquitted the accused physician.