Christianity came at the pagan Anglo-Saxons from two directions. The Celtic Church, pushed back into Wales, Cornwall, and particularly Ireland, made inroads in the north from an early base on Lindisfarne Island. The Roman Catholic Church approached from the south, beginning with the mission of St.Augustine to Aethelbert, King of Kent, in 597.

St. Augustine's Mission
Aethelbert was chosen because he was married to Bertha, a Frankish Christian princess, whose support was essential. The story goes that Aethelbert, unsure of the intent of the Christian magicians, chose to greet them in the open air to ensure that they couldn't cast a spell over him. Augustine's original intent was to establish an archbishopric in London, but this ignored the political fact that London was in the realm of decidedly pagan tribes, so Canterbury, the capital of the Kentish kingdom, became the seat of the pre-eminent archbishop in England. 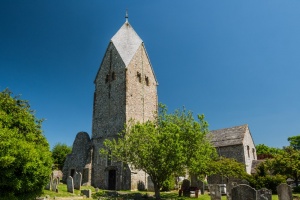 Saxon churches
The Celtic and Roman churches, though not incompatible, certainly enjoyed differences of opinion and practice. The Celtic church was ascetic, fervent, based on monastic life, and more loosely organized. The Roman church was more conscious of structure, discipline, and moderation. They also celebrated Easter on different days. To resolve their differences they met at the Synod of Whitby in 664, where the Roman cause triumphed.

The church was a very important force in society; the only truly national entity tying together the different Anglo-Saxon kingdoms. The early monasteries of Northumberland were vital centres of learning and the arts until they were scourged by the Viking raids of the 9th century.

The Venerable Bede
Anglo-Saxon England's most famous writer, the monk Bede, lived most of his life at the monastery of Jarrow, in Northumbria. Nearby, the monastery of Lindisfarne is famous for its' glorious illustrated bible, an 8th-century masterpiece of Celtic- inspired art, which is now in the British Library.

Church education
Churches were almost the only forum for education. Under the auspices of Alfred the Great church schools were encouraged, and many Latin works were translated into English. The higher church officials also played important secular roles; advising the king, witnessing charters, and administering estates of the church, which could be exceedingly large.

Travelling monks
Most of the early work of spreading the Christian gospel was done from monasteries. The early monks were unlike the medieval ideal with which readers of the popular Brother Cadfael mysteries by Ellis Peters are familiar. The monks of the 7th and 8th centuries were not confined to a closed monastic community, but carried the responsibility of travelling, usually on foot, throughout the surrounding countryside to preach and convert in the villages.

This was especially true of monks from the Celtic monasteries. Regional, or district monasteries were established to better serve an area. These were designated "minsters", and the term lives on in many place names, such as Warminster, and Axminster.

Most church buildings were built of stone, but this was not true of domestic buildings. Even in towns, very few buildings would have had even a stone foundation. Most dwellings were wooden, with low, thatched roofs, an open hearth in a floor of earth or gravel, and walls of planks or wattle and daub. Especially in towns, where then, as today, buildings were crowded together, fire was an ever-present danger.