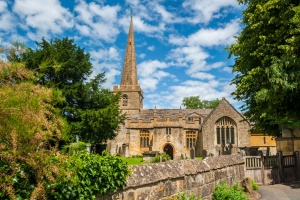 There are few sights that evoke "Englishness" more than that of a slumbering parish church. Cathedrals in England span only about 400 years of English history and cultural influence (with the exception of a very few modern cathedra, which sometimes don't evoke much of anything).

Parish churches, on the other hand, tell the tale of some 1500 years of English history and social change. The humble parish church is an integral part of English social life and culture.

Cathedral churches were not cathedrals in the modern sense, but "mother churches" from which the first missionary priests went out to preach Christianity to the pagan inhabitants in a particular region.

Churches, or chapels (only later called "parish churches"), were generally private foundations, established by thegns, bishops, lay societies, or even an association of parishioners.

The first parish churches were not built by the church, but by local lords. They were essentially owned and operated by that lord.

Saxon Churches
Churches were often located on pre-Christian sites of spiritual significance, taking advantage of people's existing devotion to a particular place. Worship was carried on in the same place, just with a Christian orientation. Speaking of orientation, churches are nearly always oriented so that the main altar is at the east end of the church, facing Jerusalem, and, not coincidentally, the rising sun. Even if the altar end of the church is not literally in the east, it is called the "east end". In theory at least, the east end of an English parish church could face west! 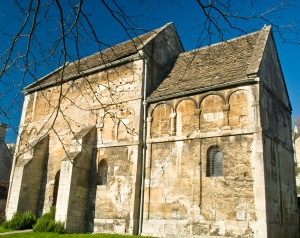 The origin of the English parish is murky. The term originally meant an administrative district. When the term "parish" was first applied to the church, it meant the territory of a bishop, what we would today call a diocese.

It is speculated by historians that parish boundaries were originally those of Saxon manors. The extent to which the church parish and the local lord's authority overlapped is apparent when you consider that before the Norman invasion one of the accepted ways of becoming a thegn was to build a church, especially one with a tower (the tower was a defensive measure against the threat of Danish invaders).

The thegn could install a priest of his own choosing, change the priest at will, even dismantle the church if he saw fit!

The chancel of the church was the domain of the priest, and the nave "belonged" to the parishioners. Each was responsible for the upkeep of their domain. This helps explain the curious architecture of some early parish churches, particularly in Norfolk and Suffolk, where the chancel is built of carefully squared stone, and the nave of much cheaper flint.

The basic architectural characteristics of the Saxon parish churches are: rectangular east end, side entrance (usually on the south side), and a west tower.

The distinction between chancel and nave led to the development of rood screens to mark the division between the domain of the priest and that of his parishioners. These screens, usually of wood, but sometimes of stone, became extremely elaborate. Many were destroyed under the Reformation and the later Puritan influence. Only a few of the early screens remain, as at Stanton Harcourt (Oxon), and Bramfield (Suffolk).

One point to remember is that there was no seating in churches at that time. People attending a service stood in the nave. Luckily, it was not until much later that long sermons became popular (see below), so the parishioners did not have to suffer long!

The floor plan of southern Anglo-Saxon churches was based on the traditional Roman basilica, with an eastern apse, no transepts, western entrance, and aisles. Good examples survive at Brixworth (Northants), Wing (Bucks), and Worth (Sussex).

In the north, the Celtic influence led to churches that were narrow, tall, and rectangular, with doors on the sides. 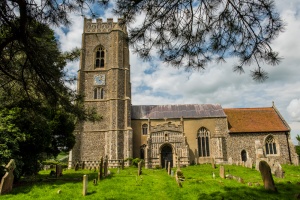 Norman Churches
Curiously, despite the triumph of the Roman church over the Celtic one, it was the Celtic model that became the norm for parish churches in England. The Normans rebuilt many of the earlier Saxon churches, in the process destroying much of the regional differences in favour of a more unified Norman "look".

Early Norman churches were aisless, with a central tower, and built to a cruciform plan (i.e., they were shaped like a cross, or like a small t).

Medieval parish churches were usually plastered inside and out. Vivid pictures were painted on the interior plaster to illustrate Biblical scenes for the illiterate population. Statuary was also richly painted. Sadly, very little of the original plastering or painting remains today, so it requires a strong imagination to picture how the churches would have looked 1,000 years ago.

Before the Great Plague of 1348-50 the growing population necessitated more space inside parish churches, so many churches added aisles at this time.

Wool Churches
The most notable parish churches of the late medieval period are the so called "wool churches" common to the Cotswolds and East Anglia. These are churches endowed by the newly rich class of local merchants thriving on England's wool trade.

Many of these magnificent buildings, such as Thirsk (Yorkshire), Northleach (Gloucestershire), and Lavenham (Suffolk), are like mini-cathedrals, complete with fanciful carvings, elaborate ornamentation and funereal monuments inside the church.

The Tudor era saw one important change; it was under the influence of Elizabeth I that preaching long sermons became popular. And by long, I mean loonnnnng - 2 to 4 hours was not uncommon. This meant that the victims, ... er ...church attendees, needed to sit to listen, so pews became standard in the naves. The preacher needed a lectern, and more often, a pulpit. So the pulpit was added to the nave also. Most of the pulpits you see in parish churches today date from the Tudor period, or later.

The Tudor period saw the end of the great church-building era. Far fewer churches were built from this point to the present day, the most prominent (architecturally speaking) being the Classical motif of the Stuart and Georgian period, and the Gothick Revival of mid-Victorian times.

Most new parish churches were built in the ever-growing cities, where the expanding urban population necessitated new parishes. Most notable here is London, where the Great Fire of 1666 destroyed most of the medieval churches (and gave a young architect named Christopher Wren quite an opportunity to evolve a new classical style of church).

In the modern era there is more religious freedom, and with the subsequent splintering of Christian sects, and the introduction of more non-Christian religions into England there are few new parish churches built. And those that are may be interesting to their parishioners but to few others. Some of the old churches that once served prosperous villages have fallen into disuse and been abandoned as population shifted. Many of these churches are now being looked after by the Redundant Churches Fund.

Most parish churches are open to visitors (though urban churches are more often closed). Just walk in (and dress warmly if you plan to do this a lot - they can be chilly even on the warmest days). Many churches have placards or handouts giving details of the building history and pointing out its architectural features. These small gems of living history give a much better sense of England and its culture than do the grandest cathedrals, and they're usually free. Just drop some small change in the donation box by the door.