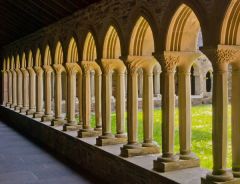 Though the Celtic people of Scotland must have been exposed to Christianity through their contact with the Romans, it was not until the 6th century that the new religion made real inroads in the northern region. Two men were primarily responsible for the spread of Christianity in Scotland; Columba and Ninian.

St Ninian
Ninian was a Romano-British native who came to the Solway area around 397 AD. He established a monastery at Whithorn, with an emphasis on ascetic living. Ninian's monastery became a famous centre for learning, and by the time of his death in 432 AD, Ninian had been responsible for spreading Christianity through the Strathclyde region and had begun missionary activity in eastern Britain and as far north as the Shetlands.

St Columba
Columba was an Irish prince, warrior, and monk. He arrived in the kingdom of Dalriada in 563, and established a monastery on the island of Iona, off Mull. From his base on Iona Columba travelled throughout Dalriada, preaching his new Celtic Christian beliefs. Columba extended his mission well beyond Dalriada, and met with Brude, king of the northern Picts at Inverness. He helped establish an independent kingdom of Scots based in Argyll.

Another major figure in the establishment of the Christian church was St Kentigern, or Mungo. The illegitimate son of a Pictish Princess (later sanctified as St Tannoch), Kentigern founded the monastery of St Asaph in Wales before returning to Scotland and establishing a bishop's see at Hoddam. He later moved to Glasgow and founded the cathedral there.

This charming, detached cottage sits in a rural location near Uig on Skye, and sleeps four people in two bedrooms.
Sleeps 4

This detached cottage is in the small hamlet of Oldshore Beg near Kinlochbervie in the Highlands and sleeps six people in three bedrooms.
Sleeps 6