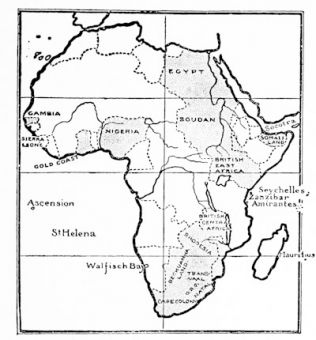 British Possessions in Africa, 1903
South Africa
In South Africa after the treaty of 1902 British supremacy was no longer in question. Nevertheless the war appeared to have been only the culminating phase of a long period of racial antagonism. A very large proportion of the British in those regions were still naturally suspicious of the Dutch, and were strongly opposed to any early extension to them of real political power. In the view of Unionists at home, and of the former High Commissioner, Lord Milner, it was only by slow and tentative steps that it would become safe to place the Dutch colonies on an equality with the British. With the Liberals however it had become an axiom, a cardinal article of belief, that among the white races restrictions upon political liberty are a disintegrating factor; that the loyalty of a people was to be won not by a cautious distrust but by a generous confidence, bestowed even at a considerable risk. The Liberals were no sooner in power than they resolved to take the risks in South Africa, and to bestow on the states with a mainly Boer population the full status of colonies with responsible government - it had not yet presented itself to the mind of any one that there was anything derogatory in the name of "Colony." Lord Milner's place had before this been taken by a prominent Unionist, Lord Selborne, who was nevertheless prepared loyally to give effect to. the policy of the new Government. In spite of warning protests from the Opposition leaders, who declined to share the responsibility, Sir Henry Campbell-Bannerman took the risks, and conceded responsible self-government to the Boers who had so recently been engaged in a desperate struggle against the might of the Empire into which they were now incorporated.

Whether the act was recklessly rash or courageously magnanimous, it was justified by the event, at least so far as the experience of seven years can justify the formation of a definite conclusion on the subject. It was not misinterpreted like the retrocession of 1881, and it converted a people with an emphatically hostile tradition into loyal citizens of the British Empire. How far antagonistic elements had been harmonised was seen when the South African dominions, after prolonged deliberation, formulated a scheme for the federation of the Union of South Africa - like the Canadian and Australian groups - which was sanctioned by the imperial parliament in 1909.

India
In India the vigorous vice-royalty of Lord Curzon continued to be productive of much con­troversy. Suspicions that Tibet was entering into dangerous relations with Russia led to demands for a treaty with that mysterious state, whose conduct necessitated a military expedition which was completely successful in achieving its objects. Native sentiment was greatly excited by the partition of the province of Bengal. The reasons for the excitement caused are not easily intelligible to any one who has not an intimate knowledge of Indian affairs. But the effect was to set on foot an agitation, not among the Mohammedans but among the Hindus of Bengal, which provided the Indian government with very grave problems of administration for at least five years to come. Lord Curzon's retirement, however, was brought about not by this but by very serious friction between the Viceroy and the Commander-in-Chief, Lord Kitchener, in which the Unionist Government supported the latter.

Lord Curzon's place was taken by Lord Minto, who, like Lord Selborne in Africa, found- himself able to work in admirable harmony with Mr. John Morley, who became Secretary of State for India when the Liberals came into power. The agitation among the Hindus became so active, and the language of the native press so seditious, that there were loud outcries for severe repressive measures. Strong measures were, in fact, taken by Lord Minto and Mr Morley, of a character much more drastic and arbitrary than could be dreamed of in dealing with the Press in England. They were accordingly condemned by all those persons who declined to recognise any warrant for applying different governmental principles in India and in England; while they were condemned with equal vehemence by another school as far too lenient, and a virtual encouragement of sedition. The Indian Government, however, went on its way undisturbed by the attacks of either wing, and again its conduct appears to have been justified by the results.

Europe
During the reign of King Edward VII a remarkable change took place the relations between the United Kingdom and the European Powers. Almost unanimously Europe had accepted as undoubted facts the wildest of fabrications concerning the doings of the British in South Africa. Largely owing to the genial personality of the king himself, there was now a general disappearance of the prevalent sentiment of hostility. Hitherto the two Powers with whom the dangers of collision had been most serious were Russia; and France. Almost throughout the nineteenth century antagonism between the British Empire and Russia had been a dominating factor in politics, while ever since the British occupation of Egypt there had been perpetual friction between British and French.

At an early stage of the great war between Russia and Japan, the extraordinary behaviour of a Russian squadron, bound for the Far East, in firing upon an innocent British fishing fleet, seemed almost to have made war inevitable. But the war was avoided, perhaps because of an unmistakable demonstration of the efficiency of the British Navy. The terrible disasters of the Russian struggle with Japan did much to dissipate the belief in Russian military power. The attitude of the two empires to each other became less suspicious, and there was a new inclination on both sides to attain the adjust­ment of clashing interests in a spirit of goodwill. This took shape in the most marked manner when an agreement was arrived at as to the treat­ment of Persia, which on the whole had the ap'proval of both parties in England.

France
A visit of the king to Paris had an extraordinary effect in dissipating a popular French impression that British sentiment was actively hostile. An agreement with regard to Morocco and Egypt removed the most serious among the remaining causes of friction, and a spirit of warm friendship grew up between the two countries. Unhappily it has to be admitted that a less cordial spirit was engendered with another of the great Powers. The sudden determination of Germany in 1905 to develop a powerful navy aroused British alarm and suspicion; while the increasing goodwill between Britain, France, and Russia developed among the Germans a belief that the British were pursuing a deliberate policy of isolating Germany with presumably sinister intentions.

The result was that each nation urged forward naval programmes manifestly with an eye to the suspected aggressive intentions of the other, while to each it appeared that the motive of the other was not self-defence but aggression. In well-informed quarters the idea that the German Emperor desired a war of aggression for the purpose of breaking up the British Empire was never credited; but in both countries a portion of the Press persistently maintained an inflammatory tone which greatly increased the difficulty of attaining a mutual understanding.
<< Edwardian Britain and Electoral Reform - Foreign Affairs under Edward VII - Britain 1910-1912 >>

Anne would give birth to Elizabeth I just 3 months later

This king's son and heir was dubbed The Black Prince


He was the son of Edward II