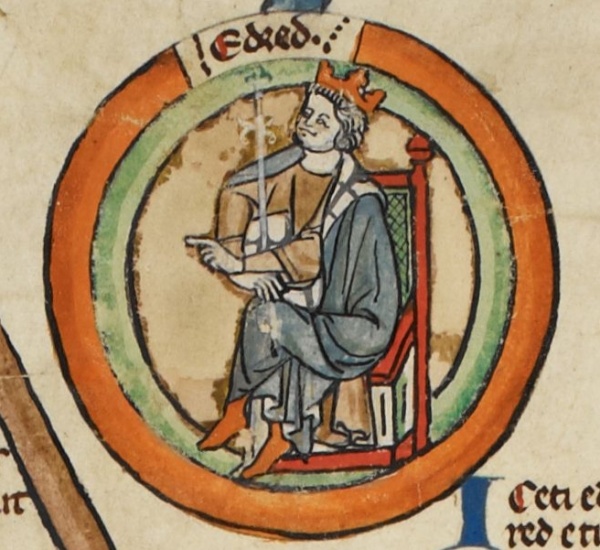 Eadred was a son of Edward the Elder by his third wife Eadgifu, and was born around AD 923. He came to the throne when his elder brother Edmund I (Edmund the Magnificent) was stabbed to death on 26 May AD 946. He was consecrated as King of the English at Kingston-upon-Thames on 16 August.

As part of his coronation, Eadred received the submission of northern earls and Welsh rulers. The Anglo-Saxon Chronicle records that Eadred controlled Northumbria and forced the Scottish nobility to submit, but if so it was a temporary submission.

Eadred inherited a volatile political climate from his brother Edmund. In 947 he reinforced his control of Northumbria, but it soon fell under the control of Eric Bloodaxe, previously king of Norway.

But Eadred could not be striking terror into Northerner's hearts all the time. While he was dealing with the troublesome Archbishop of York, Olaf Sihtricson established himself as king of Northumbria in 950. Olaf was king of Northumbria at least twice, and possibly three times over a span of 40 years.

On this occasion Olaf's reign was short; in 952 he was thrown out in favour of Eric, who reigned until 954. We do not know exactly what happened to Eric, but one later account says that he was slain by Eadred's supporters, possibly at Stainmore in Cumbria. Eadred gained control for the third time, and ruled Northumbria for the remaining year of his reign.

Eadred died of a longstanding and unidentified illness, possibly a digestive problem that made him unable to consume anything but the juices of his food. The illness forced the king to delegate much of his authority towards the end of his reign. Many of his responsibilities were taken over by St Dunstan, Abbot of Glastonbury. As well as helping the ailing king, Dunstan encouraged Eadred in his faith and support of monastic communities.

Eadred died at Frome, Somerset, on 23 November 955 and was buried in the Old Minster in Winchester. You can still see an ornate mortuary chest at Winchester Cathedral said to contain Eadred's bones.

Though he was aged 32 at the time of his death there is no record of Eadred ever marrying, and he had no heirs. On his death, the throne passed to his nephew Eadwig.