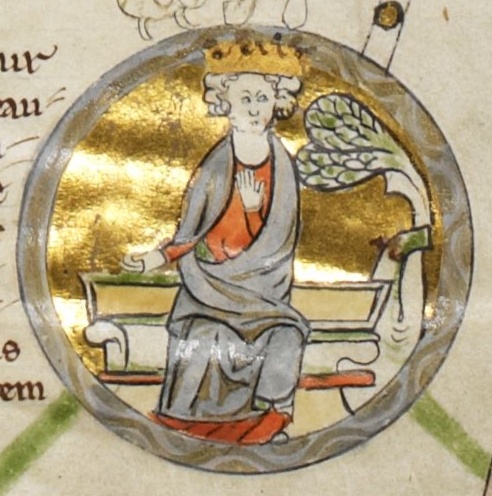 Edmund I (often called Edmund the Magnificent or Edmund the Elder) was the son of Edward the Elder and half-brother of Athelstan. When Athelstan died in AD 939 Edmund came to the throne, aged just 18. Shortly after taking the throne, he married Aelfgith, who would later become canonised as St Aelfgith, foundress of Shaftesbury Abbey in Dorset. When Aelfgith died in 944 Edmund married Ethelflaed of Damerham, daughter of Ealdorman Aelfgar of Wiltshire.

Almost immediately after his coronation, Edmund had to face the threat of an invasion by Olaf Guthfrithson, the Danish ruler of Northumbria and Dublin. Guthrithson took York, from whence he raided the Midlands. Edmund besieged Olaf at Leicester, and negotiated a treaty under which Olaf would rule everything north of Watling Street, but take Edmund as his overlord. Furthermore, each would be heir to the other's kingdom: the longest-lived would get all of England.

English history might have turned out much differently had Edmund been the first to die, but as it happened Olaf lived just a year after the treaty. He was killed while raiding in what is now the Scottish Borders in 941. Edmund immediately launched an invasion and retook Mercia from the Northumbrians.

Olaf Guthrithson was succeeded as king of Jorvik (York) by Olaf Stryggson, forcing Edmund to march north to reclaim Jorvik and Northumbria. Quashing a Welsh revolt on the way, Edmund drove out both Olaf Stryggson and Ragnall Guthrithson, who was contesting Stryggson's rule.

Edmund continued north to conquer Strathclyde, seeking revenge on King Donald mac Donald, who had sided with York's erstwhile rulers. Edmund restored Strathclyde and Cumbria to Malcolm I of Scotland, conditional on Edmund's overlordship of, now, nearly the entire island, though in practical terms Edmund ruled over most of what is now England.

In his later years, Edmund was occupied with affairs on the continent of Europe. His nephew, Louis IV of France was captured by his enemies in 945 and was held captive by Hugh the Great, Duke of the Franks and Count of Paris. Edmund put pressure on the Duke to release Louis, which was achieved later that year.

Edmund's death was sudden and violent. On 26 May 946, he attended St Augustine's Day mass in Pucklechurch, Gloucestershire. There he was killed by a thief named Leofa, who Edmund has previously exiled for his crimes. The death was probably a political assassination, but the event was later romanticised by the medieval chronicler William of Malmesbury, who claimed that Edmund was feasting when he spotted Leofa in the crowd. Outraged that the man he had exiled dared to defy his sentence, Edmund attacked him in person and was killed.

He was buried at Glastonbury Abbey, then under the rule of St Dunstan, whom Edmund had appointed just a few years earlier.

According to the chronicle, Edmund's retainers killed Leofa on the spot. Despite the confusion over exactly how Edmund died, the consequences were serious, for though he had sons, they were too young to rule. Edmund was succeeded instead by his brother Eadred, who was in turn succeeded by Edmund's sons Eadwig and Edgar.