The Rise of the Duke of Marlborough 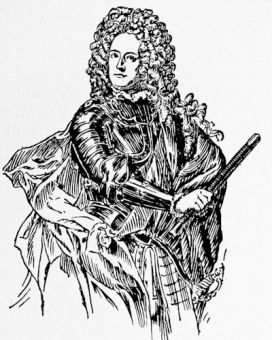 John Churchill, Duke of Marlborough, after the painting by Van der Werff

The death of William III left Whigs and Tories very evenly balanced in the House of Commons, while the Whigs had a small majority in the Peers. On the great pressing question of the hour, however, Whigs and Tories were for the time being at one. With few exceptions the Tories as well as the Whigs were a war party. Under these conditions William would have worked with a ministry mainly Whig, since the Whigs would have given him the stronger personal support.

The Crown was still so strong that nothing short of a marked predominance in the Opposition would outweigh the king's personal predilections in selecting ministers and directing policy. Although William's successor was very far from possessing a strong character, this dominance of the Crown lasted throughout her reign. The queen chose her own ministers, and she did not select them because they represented the dominant party in the House of Commons.

Countess Sarah
The queen's choice was generally managed by the reigning favourite. The reigning favourite at the moment of her accession was Sarah, as yet only Countess of Marlborough; and for eight years her ascendency was the governing factor in English politics. Marlborough himself still counted as a Tory, though his party ties were of the slenderest. His closest personal ally was Godolphin, whose son had married one of Marlborough's daughters, while another was the wife of the young Earl of' Sunderland, who this year succeeded to the title. Godolphin's Toryism, too, was by no means deeply rooted.

The natural effect of Anne's accession was in the first place to give the Tories the ascendency in her ministry, but in the ministry itself the real supremacy lay with Marlborough; and since Marlborough was the in­heritor of William's foreign policy, which was essentially that of the Whigs. and only accidentally that of the Tories, it followed that Marlborough and his ally Godolphin presently found themselves relying upon the Whigs and parting from the Tories.

The curious fact is that Marlborough's own supremacy depended on his wife's ascendency over the mind of the queen When Anne freed herself from the yoke of the Duchess Sarah, Marlborough's supremacy collapsed. It was not the Revolution but the Hanoverian Succession which placed the Crown in subjection to parliament.

At the moment of Anne's accession, however, everything pointed to the ascendency of Tory policy. By associating itself with the war, the party had saved its credit with the country. The queen's personal predilections were Tory, notably on questions connected with Church and Dissent, and a period of Whig depression was generally anticipated.

On the continent William's death appeared to be a ground for infinite congratulation for Louis XIV. For thirty years past William's patient, indomitable, remorseless resistance was the one obstacle which had constantly checked the French King's ambitions, and had more definitely foiled them since he had brought England to join forces with Holland. William was the diplomatist who had combined the powers against France, the general who had neutralised victory after victory of the French arms.

William had been the soul and brain of the resistance to French aggression. And now the great antagonist had disappeared, at a moment when Louis occupied a position more advantageous than ever before. His grandson Philip was de facto king of Spain, and was accepted as king by Spain. French troops were in occupation of the Spanish Netherlands. Within the German Empire the Elector of Bavaria, Max Emanuel, had allied himself with Louis out of hostility to the Emperor.

His alliance with Savoy gave him the entry of Italy. No one as yet knew that the allies had the two greatest soldiers of the day to lead them, and that one of them was not only a much greater military genius than William had been, but was hardly if at all inferior to him as a diplomatist.

[Ed. And now that we have covered the background of Marlborough's career, things get really interesting as the next section covers his role in the War of Spanish Succession and the buildup to the Battle of Blenheim]