Mary, Queen of Scots in Captivity 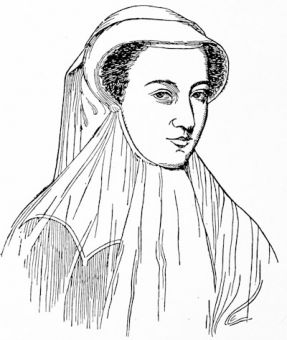 Queen Mary Stuart, after the painting by Francois Clouet

The England of 1568 was by no means the England of 1558. Ten years of a steady, honest, and business-like government had established the national finances on a sound basis, completely restored public confidence, and revived the activity of trade. The regulation of home trade and industry had been reorganised by the Statute of Apprentices.

The process of enclosure had apparently been brought to a natural end, because the time had arrived when it was no longer obviously advantageous to the landowner to convert arable land into pasture; there was no more dis­placement of labour, and the labour which had already been displaced was beginning to find industrial instead of agricultural employment.

The moral depression of the years preceding Elizabeth's accession had passed away, giving place to a spirit of energetic self confidence which was finding expression in the adventurous activities of the seamen, Elizabeth was firmly seated on her throne, and the fact had become obvious to the world, as well as to the queen and to Cecil, that neither France nor Spain would or could openly assume the championship of Mary Stuart's title to the throne of England.

Any attempt to do so by one of those two Powers would compel the intervention of the other, and both already had too much on their hands to enter upon outside adventures which did not promise immediate and certain benefit.

England, in short, had passed iron a condition of instability to one of assured stability. The immediate trouble which vexed the souls of her statesmen was the question of the succession if anything should happen to Elizabeth, a question which Elizabeth herself preferred to leave to chance. She had no intention of dying, and what might happen if she should die interested her less than the control of events during her own lifetime.

The problem of Mary
Such was the position when Mary Stuart crossed the Solway, and by so doing presented Elizabeth with a very inconvenient problem. If she restored her cousin in Scotland by force she would alienate Scottish Protestantism. If she handed her over to the victorious Lords of the Congregation she would be condoning rebellion. If she allowed Mary passage to France, and the queen were reinstated in Scotland by French aid, she would in effect be restoring the old French ascendency in Scotland. She rejected each of these courses and resolved to keep Mary a prisoner in her own hands, in spite of the risk of her becoming a figurehead for any conspiracies directed against Elizabeth herself.

But the first thing to do was to minimise Mary's power for harm and at the same time to get some sort of colour for holding her prisoner. Elizabeth could plausibly assert that she was not justified in restoring Mary until the charges brought against her by her subjects had been investigated. Mary could not prevent an investigation, however vehemently she might deny that the English queen had any right of jurisdiction in the matter.

Commission of inquiry
So a commission was appointed at York, and later transferred to Westminster, before which the Scots Lords were invited to defend their own actions, which meant in plain fact to formulate their charges. They did so and put in their evidence, including the famous Casket Letters; documents which, if they had actually been written by Queen Mary, carried absolute proof of her guilt. The evidence having been produced, further proceedings were stopped.

There was no cross-examination, no admission of evidence on the other side. Mary of course could not be condemned, but Elizabeth did not wish to condemn her; she merely wished to blacken her character thoroughly in the eyes of the world, and, having done so with complete success, to retain a large latitude of choice in such further action as expediency might suggest.

Northumberland 's revolt
Mary was kept in ward, but the publication of the charges against her did not prevent her from at once becoming the centre of plotting among disloyal Romanists. The Duke of Norfolk, the premier peer of the kingdom, had been one of the commissioners for her trial; but the evidence did not dissuade him from himself contemplating marriage with Mary.

The earldom of Northumberland had been restored to the Percies, and in 1569 the Northern earls rose with the design of setting the Catholic Mary on the throne of England. The rising was crushed, and the earls of Northumberland and Westmorland were driven from the country; but the general effect was to bring wavering supporters of the old religion decisively into the ranks of the loyalists.

The world as a matter of course believed that Mary had been involved in the conspiracy, and popular animosity towards her was intensified; though as before it did not suit Elizabeth to take any steps for proving either her guilt or her innocence.

Catholic loyalty to the Crown would probably have been completely confirmed, but for the Pope's blunder in issuing a bull deposing Elizabeth and laying upon all good Catholics the duty of seeking her removal from the throne, while instructing them to maintain an appearance of loyalty until the moment should arrive for striking. The host of loyal Catholics who set patriotism before their allegiance to the Pope were placed in a hopelessly false position.

The most fervent declarations of loyalty were compatible with complete acceptance of the papal bull; which accordingly made every adherent of the old religion a suspect, and of necessity led to a greatly in­creased rigour in the application of the laws against papal practices so that from this time onward adherence to Romanism became politically dangerous, while it entailed a considerable degree of petty persecution.

The sentiment of hostility to Rome and all her works was intensified, and there was a growing feeling in favour of England standing forth as the champion of Protestantism and the ally of Protestants, whether they were French Huguenots or Netherlanders struggling against Alva and the tyranny of Spain.

English Protestantism fully recognised Spain as the enemy, all the more readily because English seamen were endeavouring to force their way into the New World, where Spain blocked the entry, and sailors who fell into the hands of the Spaniards were handed over as heretics to the tender mercies of the Inquisition. But Elizabeth, while she knew that sooner or later England would have to fight Spain, was determined te put off the evil day as long as possible.

The primary object of her diplomacy was to avert war at least until she felt strong enough to be sure of victory. She would not openly quarrel with Spain. But at the same time she was supremely anxious to preserve amicable relations with the government of France, whether Huguenots or Catholics were dominant. At the end of 1571 an open rupture was with difficulty averted.

The Ridolfi Plot
A plot was discovered, for which the agent in England was one Ridolfi, which aimed at liberating Mary, marrying her to Norfolk, setting her on the throne, and killing Elizabeth. It was abundantly dear that the Spanish ambassador, Don Guerau de Espes was in the plot. He was expelled from the country, and if parliament had had its way Mary would have been attainted and executed; but Elizabeth held fast to her own scheme of treatment for the captive, Philip himself was paralysed for action by the sudden outburst of a fresh revolt in the Netherlands, which Alva imagined himself to have brought into subjection.

Elizabeth was dallying with projects for her own marriage, first with Henry of Anjou, the heir-presump­tive of his brother Charles IX in France, and then with his still younger brother, Francis of Alencon, who was only some twenty years younger than herself.