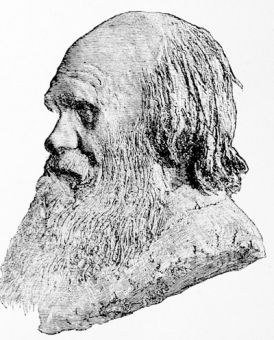 Charles Darwin, from a medallion by Alphonse Legros

In the years which passed between 1852 and 1869 great events occupied public attention - the establishment of the Second Empire in France, the Crimean War, the Indian Mutiny, the Unification of Italy, the American Civil War, and the decisive contest between Austria and Prussia. They ended with the Act which transformed the British House of Commons, at the instance of a Conservative ministry, into a body representing a democratic instead of a bourgeois electorate. But they were years in which domestic progress flowed on and the tide of material prosperity rose higher and higher, undisturbed and unaided by any heroic legislation or startling innovations. No sweeping changes came over the face of the land; no mechanical inventions broke in upon the consistent development of the established system of manufacture, of traffic and of commerce.

Literature
The great names which had come to the front in literature in the previous twenty years were still the leading names, though in. poetry they were most notably reinforced by Matthew Arnold, Swinburne, and Rossetti, and among novelists by George Eliot and Charles Reade. Still more characteristic of the period, however, as finished expressions of its placid conventions, were the' by no means profound works of Anthony Trollope and Charlotte Yonge. While poets and novelists accomplished work of the highest rank, and in work sometimes of a much lower order produced photographic pictures of the life and manners and customs of mid-Victorian upper middle-class life; while Carlyle and Ruskin, each after his own inspiring, if occasionally erratic, fashion, upheld moral ideals to an age which presented itself to their eyes as drearily materialistic and hidebound by conventions - the most distinctive intellectual work of the day was being accomplished in another field.

Charles Darwin
At the beginning and at the end of the seventeenth century the achievements of Francis Bacon and Isaac Newton had marked epochs, turning points, in the history of human thought. Another such epoch was now marked by the publication in 1859 of the Origin of Species by Charles Darwin. Already the geologists had alarmed religious orthodoxy by their demonstrations of the world's antiquity, proofs that it had not been created precisely in the first week of the year 4004 B.C. The exact and literal interpretation of Scripture as an inspired record not only of spiritual truths but of material historical facts, a record of which no single word might be gainsaid, now suffered an infinitely more damaging blow from the biologists. An investigator of infinite patience, a whole-hearted seeker after truth, was able to place before the world a provisional demonstration that the infinitely varied forms of life in the world were not the outcome of a single creative act, but had been evolved through countless years from one infinitesimal primordial type. Man himself was but the most perfect type to which evolution had attained.

Species had become differentiated by the transmission of inherited characteristics. If those characteristics rendered them better adapted to their environment they survived; if not, they perished. It appeared at first sight that if this theory were true the formulas of orthodoxy must be false fundamentally. It was only by slow degrees that men realised the true significance of the doctrine of evolution and the moral and spiritual insignificance of the conventional beliefs which it displaced, just as they had taken a very long time to realise that the truth: of Christianity was compatible with the truths of astronomy. Orthodoxy had to readjust its formulae to the newly ascertained facts, though it pre­sently discovered that the readjustment touched nothing fundamental. But the misapprehensions were not confined to the orthodox, and a sceptical philosophy was generated, based upon biology, of which the most brilliant popular exponent was Professor Huxley, while Herbert Spencer was its high priest.

If the principle of laissez fair in commerce was thoroughly established by Peel and carried to completion by Gladstone, its rejection in the relations between capital and labour was hardly less definite. The Factory Acts, that is to say, reasserted the old doctrine that the state was warranted in intervening for the sake of the public good even at a certain economic risk. The advocates of intervention, indeed, generally denied the economic risk, claiming that profits would not be diminished by the restrictions imposed; but at the bottom of the public support lay the conviction that the intervention would still be morally justified even if the profits of trade were reduced. The restrictions, however, on unqualified competition were applied with definite limitations which emphasised their origin as moral, not economic. They were employed exclusively for the protection first of children and then of women from excessive labour tending to the physical and moral deterioration of the race. Grown men must take care of themselves, and must be left to unqualified competition so far as the state was concerned.

The Factories and Workshops Act
The whole process of restriction moreover, was tentative and experimental. It was at first brought to bear only on specific employments in which experimentation was comparatively easy, or where, as in the case of the collieries, the evils born of non-intervention were particularly flagrant. But it followed that during the succeeding years the experiment was extended to other trades and was carried further in the trades to which it applied. Thus textile factories were at first alone subject to its operation, but in the fifties and sixties other allied trades were brought within the compass of the Factory Acts, then trades such as pottery, which were not allied to them; and, finally, in 1867 the Factories and Workshops Act defined the factories where the regulations were applicable as covering all premises where more than fifty persons were employed on any manufacturing process. Also during these years there was an increasing disposition to impose regulations of a definitely sanitary character, and requiring the employers to fence their machinery and to take other precautions for protection against accidents. There were, no doubt, always employers who declared that every fresh restriction placed them at a disadvantage with the foreign competitor, but there was never any appearance that the British manufacturer failed to obtain adequate profits.

Trade Unionism
The men were left to themselves, and there was a steady advance of the new trade unionism exemplified by the Engineers' Society. The new unionism was not bellicose; nevertheless in 1859 there was another great contest between masters and men in the building trade. The strength of the men's organisation led the masters to resolve not merely to refuse to recognise the unions but to break them up at least as milttant organisations. A local strike was met by a general lock-out. The struggle lasted for a long time; finally the men did not obtain the concessions for which they had originally struck, but, on the other hand, the masters were obliged to withdraw their demand that the men should separate themselves from the unions.

Now the new unionism represented by the great societies may be said to have had a double aim - to enforce all round conditions which the most liberal masters were willing to concede, and to procure legisla­tion which would strengthen their own hands. They did not want state regulation but they wanted a legal status which would enable them to bargain more effectively. It was therefore in their interest to be recognised as law-abiding bodies. But there were many among the workmen who were not satisfied with what may be called constitutional methods.

The prominently violent action of some of these minor unions, wholly opposed though it was to the spirit of the principal bodies, was naturally looked upon by the public as characteristic of the whole trade union movement. The result was that in 1867 there was a commission of enquiry which was eagerly courted by the leading unions. While the enquiry resulted in a report of a character immensely more favourable to the unions than had been generally anticipated, a judicial decision in the same year stamped them as illegal associations, which consequently had no power at law to protect their own funds from malversation. It thus became decisively clear that trade unions would in future be practically powerless until they acquired a recognised legal status. That was the work of the next period, when the Reform Bill had given the working man a parliamentary vote.

The Masters and Servants Act
The year however also witnessed an Act which removed a serious inequality. Theoretically the law applied the same treatment to employers and employed, but in actual fact it did not. In the case of a contract between "master and servant," which covered contracts of service generally, the master who broke the contract could only be sued for damages, but the servant who did so committed not a civil but a criminal offence, consequently the latter could not give evidence in his own defence; he was liable to imprisonment, and might be tried before a justice of the peace, who, on such questions; could hardly be regarded: as an unbiassed judge. The Masters and Servants Act, procured in effect by the action of certain northern trade unions, and passed by the Derby Government, remedied the worst features of the existing law in this respect.