Politics in the Middle Ages 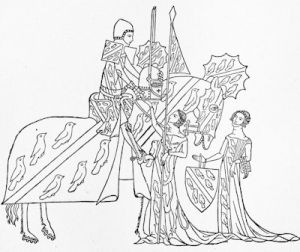 An English knight in full caparison, 1375, Sir Godfrey Luttrell and his wife, from the Luttrell Psalter

The landmark which British historians select as setting the boundary between the medieval and the modern is the accession of the house of Tudor. There was, in fact, no sudden and violent change at that particular moment. But in the hundred years or so of which 1485 is approximately the central point, events occurred and movements culminated which differentiate the medieval from the modern world.

The political structure of Western Christendom was changed; the boundaries of the known world were expanded; the fetters by which intellectual progress had been bound were broken; and we may pause to inquire what were the characteristic features of what we call the Middle Ages which distinguish them from what we call modern times.

The first and most obvious fact is that Western Christendom was practically acquainted with only quarter of the Eastern Hemisphere, one-eighth of the world known to us today, namely, the western quarter lying north of the Equator. All that lay beyond was either a sheer blank or a region of travellers' tales and nothing more. To the inhabited world as known to the Romans was added during the Middle Ages so much of Europe as lies between the Baltic Sea and the Danube, together with Norway and Sweden. In short, the entire civilised world as known to Christendom meant Europe west of what is now Russia, Asia west of the Euphrates, and the Mediterranean coast of Africa.

These were the physical limitations whose disappearance differentiates the medieval from the modern. Next to it we must place a distinction of another kind. Medieval Europe was dominated by the Roman conception of the Empire as a universal political dominion, and by the Christian conception of the Church as a universal theocratic dominion; both involving the Idea of the fundamental unity of Christendom in opposition to the common enemy, whether regarded as the barbarian from the political point of view or the infidel from the ecclesiastical. All Christendom, however, setting aside always the Greek Empire and the Greek Church, recognised vaguely one temporal head in the Emperor and one spiritual head in the Pope.

Closely associated with this, perhaps merely another aspect of it, is the fact that medievalism was the outcome of the collision between the elaborate civilisation of the Christianised Roman Empire and the tribal clvilisation of the Teutonic barbarians. For the mixture of these two civilisations, resulting from the Teutonic conquest, produced Feudalism, A political organisation based on the Empire, a religious organisation based on the Papacy, and a social structure resting on Feudalism, were the fundamental bases of medievalism.

Next, if we seek to discover what was the fundamental medieval conception of the function of government, we shall find it in the compulsory subordination of the interests of individual persons or communities to the interests of the community in general, as conceived by those In whom the power was vested—a qualification of no small importance.

In the medieval idea, there is practically no limit to the right of Intervention by fully constituted authority. It is by universal assent warranted incarrying the interference and regulation down to the minutest details. It may regulate a man's clothes, the prices at which he sells or buys labour or goods, his employment, his very thoughts. There is no question in the medieval mind that authority possesses this right; though the power to enforce it may be wanting.

The modern problems as to the limits of State interference had not suggested themselves. The question which did arise was a different one — whether the authority which claimed the right was precisely the authority which possessed it; to which the answer could often be ascertained only by an appeal to force. In the language of modern political science, the question where the sovereignty resided was in constant dis­pute, because the relative amounts of physical force under the control of the different claimants to authority were open to doubt.

The one indisputable fact was that the superior control of physical force did not lie with the masses of the population, and therefore the sovereignty did not reside in them. The conflict as to sovereignty still continues in modern times, but on somewhat different lines.

Church against State
Most notable in the Middle Ages was the political conflict between the ecclesiastical and the temporal claims. The Spiritual endeavoured to dominate the Secular authority; the Church claimed to control the State. For two hundred years, from Hildebrand to Boniface VIII, the Popes very nearly made go6d their claim.

For another two hundred years they did not surrender it. But the Reformation and the counter-Reformation taken together left the Papacy wholly without control over temporal affairs out­side the States of the Church in Italy. As between the secular and the spiritual powers, the question was no longer whether the State should submit to being treated as in bondage to the Church, but whether the Church should be treated as in bondage to the State.

Thus in the medieval world the primary conflict of authorities was that between the spiritual and the secular, the Church and the State, which in modern times, at least in the leading States of Europe, fell completely into the background. But in the field of religion itself there was no such conflict.

The modern spirit seeks to distinguish between matters which are and matters which are not proper objects for the compelling intervention of authority; and in the modern view authority has nothing to say to the private opinions of the individual. What he believes or disbelieves concerns no one but himself, so long, at least, as he does not force his views upon his neighbours.

Moreover, what a man believes is that which satisfies his reason; you cannot make him believe or disbelieve to order; you can only control his professions. He himself even cannot force himself to believe what he would like to believe. But in the medieval view, false opinions were a proof of moral obliquity. As concerned religion at least, authority pro­nounced upon the truth absolutely, and no one could be permitted to question its pronouncement.

Nor was there any doubt where the authority lay. Rome was the final Court of Appeal. The Reformation was in one of its aspects the repudiation of Rome as the ultimate authority, whether the reformers substituted for it the authority of the Scriptures, or of the Church Universal, or recognised no appeal except to human reason. In the field of religion the change from medievalism was one from the acceptance of an established ultimate authority to a conflict of authorities or to the repudiation of all authority.

The Crown against nobility
The second conflict was that between the crown and the great nobles, between the centralising and the centrifugal forces; the crown always seeking to extend the single authority over a wide area, the baronage commonly seeking to preserve a congeries of practically independent units with a single supreme untrammelled authority in each. This is crossed by a separate contest on the part of the cities to set up a distinct authority of their own.

This battle was not fully fought out during the Middle Ages, and in Britain it followed a course markedly different from that which it took on the Continent. But in the main it stands true that the fundamental political struggle was that between the centralising pressure of the crown and the disintegrating pressure of feudalism; in which centralisa­tion carried the day, but usually, outside of Britain, left monarchy and aristocracy in close alliance and mutual dependence. Thence arose the modern conflict between the monarchy joined with the aristocracy on the one hand, and on the other the commons of the middle class, and ulti­mately the proletariat, tending to transfer the seat of authority from the former to the latter.

The foregoing generalisations with regard to the Middle Ages must be qualified when we turn our attention to particular countries, and especially in the case of our own country.