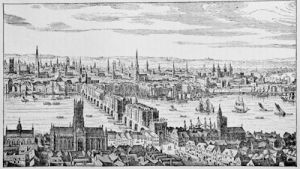 Southwark, London Bridge, the City, and the Tower, in 1666, from Visscher's 'General View of London'

The executive government in the past had been in the hands of the Crown and the Privy Council. The character of the Restoration had made it necessary that both the old Roundheads and the Cavaliers should receive recognition from the king; and the general effect was the admission to the Privy Council of so many members from both groups that the body itself became too unwieldy to conduct the business of the State.

The Cabal
The real business passed into the hands of a small informal committee, which began to be known as the Cabinet or Cabal. The name of the Cabal has become permanently associated with the group who formed this inner council after the fall of Clarendon, popular attention having fastened on the fact that their initials — Clifford, Ashley, Buckingham, Arlington, Lauderdale — spell the word Cabal.

Parliament had not formed into definite parties, and the ministers did not represent a party. They were the. men with whom the king concocted his designs or pretended to do so, and through whom he carried them to execution. Lauderdale managed Scotland. Ashley, who afterwards became Lord Shaftesbury, had sat in the Barebones Assembly.

No man could have been less of a Puritan, nevertheless he associated himself politically with the Puritan antagonism to Clarendon and to Popery. Buckingham, the most profligate and resplendent member of a profligate and brilliant court, elected paradoxically enough to associate himself with the same political connection. Clifford and Arlington, like the king's brother James, Duke of York, were either actually Catholics or ready to become so.

It was perhaps almost the strongest desire of Charles himself to reinstate the Roman Catholic religion and himself openly to join the Roman communion; to Louis XIV he had probably already pledged himself to both these objects, though always with the proviso that he was not to be expected to sacrifice his crown for a Mass. The facts, if known to Clifford and Arlington, were carefully concealed from Ashley and Buckingham as well as from Lauderdale.

Now it was no easy matter for Charles to carry out his private designs. The only theory on which the French alliance could be made to appeal strongly to the English people was that which regarded France as a Protestant Power for political purposes, a Power opposed to aggressive Catholicism a Power which held Hapsburg aggression in check. This was the theory on which Cromwell had undoubtedly entered upon the alliance.

Louis had not up to the present time displayed animosity to Protestantism. But it was already clear that the French king had embarked on a policy of French aggrandisement which was a menace not only to the Hapsburgs but to Europe at large. To Holland for a century past Spain had been the enemy but Holland was just becoming aware that Spain was no longer capable of endangering her liberties. The Spanish Netherlands lay as a buffer between France and Holland; Louis coveted them, and if they passed from Spain to France, Holland would be in much more danger from her powerful neighbour than from distant Spain.

Again, although Louis was by no means on good terms with the Papacy, it was being realised in some quarters that the centre of aggressive Catholicism was not the Papal Curia, but the Jesuit order. In fact the Papacy and the Hapsburgs, Austrian; and Spanish, had completely departed from the ancient attitude of Philip II. and the Popes of Elizabeth's time. But the Jesuits had not departed from that attitude, and the Jesuits, now in disagreement with the Papal authority, were dominant in France.