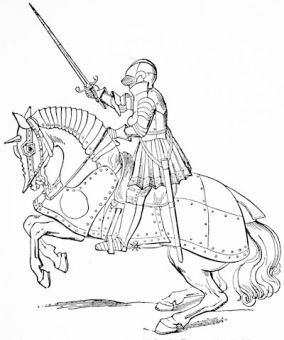 Armour presented to Henry VIII by the Emperor Maximillian, in the Tower of London

Broadly speaking, the Tudor period falls into two parts, the pre-Elizabethan and the Elizabethan. The first is a time of transition, partly constructive but mainly destructive. The second is a time of reconstruction. On the ruin of the baronage, completed by the earlier Tudors, the monarchy took a new shape perfected under Elizabeth. On the ruin of the old ecclesiastical system accomplished under her predecessors, Elizabeth constructed a new ecclesiastical system.

Out of the rural and commercial revolution which had been in progress for seventy years, the Elizabethans built up a new industrial social order. Out of the maritime activity of the first period arose the maritime supremacy which was established and the oceanic commerce which was inaugurated in the second; and from the revival of intellectual activity which practically began in the reign of Henry VII burst the blaze of literary splendour which glorified the closing years of the period. The narrative has enabled us only in part to watch these movements, which will now demand our closer attention.

Through the medieval period the power of the Crown was limited in various degrees by three forces: the fear of excommunication by the Church, the danger of armed coercion by the baronage, and, as the expenses of government grew, the power of the Commons to withheld supplies. Arbitrary action by the Crown - action, that is, which did not clearly rest upon precedent - was invariably challenged by the application of one or other of these forces, unless the approval of the three estates had Erst been secured; and these three estates or parliament obtained an effective control over legislation and a degree of control over administration.

Of the three forces, the fear of ecclesiastical censure was habitually of least account; but it could not be altogether ignored, as King John in particular found to his cost. It remained, however, for Henry VIII to bid successful defiance to the thunders of the Church and to destroy its capacity for hampering the action of the Crown.

The War of the Roses broke up the second limiting force. When Henry VII took possession of the Crown the remnant of the old baronage, together with the new baronage, were no longer able to make head against the monarchy. The complete subversion of the baronial power was demonstrated when the peers unanimously condemned the Duke Buckingham, the greatest noble in the realm, at the implied behest of King Henry VIII, in spite of the absence of any evidence that he was cherishing treasonable designs.

The demonstration was repeated at intervals throughout the reign; the nobility at all times showed an entire subservience to the Crown, as they also did in the reign of Queen Mary. Apart from Northumberland's abortive conspiracy, which was formulated with the sanction of the reigning king, and from the rising in the north in 1569, every revolt during the sixteenth century was a rising not of the barons but of the commons.

In that year the revolt of the northern earls was the last futile attempt at coercing government by a baronial insurrection. The depression of the nobility was effected partly by the enforcement of the laws against maintenance and livery through courts which were not amenable to coercion, partly by systematic fines and confiscations, partly by the merciless application of the laws against treason, reinforced by the Treasons Act of Thomas Cromwell.

There remained the third force, the power of the Commons to cut off the supplies. The time had gone by when a king could attempt to act except under colour of law. The Crown could not emancipate itself from such control as the Commons possessed, so long as it was dependent on the goodwill of the Commons for the supplies necessary for carrying out its policy. The ingenuity of Henry VIIalmost attained the desired end by the accumulation of a hoard which made appeals to the Commons for financial assistance superfluous.

But the extravagance of his son dissipated the hoard; and in the course of the French war he and his minister Wolsey were quite emphatically taught that a pulley opposed by the popular will was impracticable if it involved heavy expenditure. There was no battle for the principle that the Commons had a right to direct policy; there was merely a demonstration that in practice an expensive policy required the acquiescence of parliament. Cromwell tried to effect an emancipation by sweeping the vast wealth of the Church into the Treasury; but the intention was frustrated again by the reckless dissipation of the wealth acquired by the spoliation.

In Henry's last years, the Crown, to avoid appeals for in­tolerable taxation, was driven to the miserable expedient of debasing the currency and repudiating debts. By the time of Elizabeth's accession the Crown was as dependent as it had ever been on the goodwill of the Commons. There was no new mine of wealth to re­place the hoards of Henry VII or the spoils of the monasteries, nor had the Crown succeeded in asserting any fresh claim to impose taxation on its own authority, except for some slight alterations in the customs duties which were made in Mary's reign without exciting protest.

Subserviency, it may be said, would have served the purposes of the monarchy as well as goodwill; and we are told that the Tudor parliaments were subservient. That is a view hardly warranted by the facts. Within certain limits the Commons could be relied upon to carry out the wishes of the Crown. The nobility were beyond question subservient, and great nobles controlled the return of a good many members of the Commons' House.

Mary too erected into boroughs sundry towns where local sentiment supported her views, just as afterwards Elizabeth created boroughs in the south-west country where her own nominees were secure. Much energy was occasionally expended on the packing of parliament, but not always with success. Constituencies occasionally refused point-blank to accept the nominees sent down by the agents of the Crown. Mary's parliament in the spring of 1554 stopped very far short of endorsing the programme laid before it.

When Henry VIII intended to proceed against Thomas More by bill of attainder, he was wise in time and with­drew More's name from the bill in the face of unmistakable indications that otherwise if it were pressed forward it would be thrown out. The Reformation parliament itself rejected the Bill of Wards in spite of blustering threats on Henry's part. The House of Commons refused to discuss a money bill at all until Cardinal Wolsey withdrew from the precincts.

The right to the utmost freedom of debate was cherished and exercised. When their pockets were touched at least, Tudor parliaments quite refused to be browbeaten. Even when money was not in question, Tudor governments did not impose legislation to which they compelled assent; they could only do their best or worst by packing or otherwise to secure a house which was likely to support the measures they intended to introduce. And they could not secure such parliaments unless there was a very substantial body of popular feeling in their favour.