The War of Spanish Succession after Blenheim 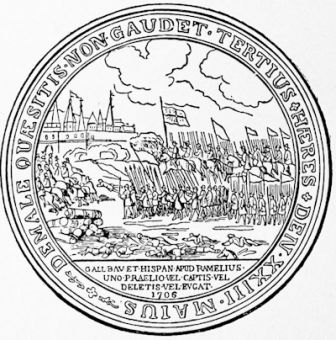 The Allied forces going into action at Ramillies, from a medal struck to commemorate the victory

The year which followed Blenheim was a trying one for Marlborough, His design for an effective invasion of France was frustrated by the failure of the imperialist troops to co-operate. He succeeded during the summer in piercing the French lines with his English and Dutch forces; but when he would have followed up the success, he was paralysed by the obstinacy of the Dutch field deputies and the misconduct of some of the Dutch commanders. There was the usual tendency of the English and Dutch, each to suspect the others of playing for their own interests.

Through the winter Marlborough was engaged in diplomatic efforts to bring the new Emperor Joseph and the German States which had joined the alliance effectively into line. Yet, although his hand was strengthened in Holland by a reaction in his favour, brought about by the discovery of the misconduct of some of the Dutch generals, Holland refused in 1706 to sanction his design of carrying an allied force into Italy and sweeping the French out of that country as he had previously swept them behind the Rhine. The Northern German States were equally averse from sharing in such remote expeditions.

Battle of Ramillies
Nevertheless he found his opportunity for dealing another destructive blow to the French in the Netherlands. The Dutch for once abstained from tying his hands, and at the Battle of Ramillies in May he inflicted a tremendous defeat upon the French marshal Villeroi. The result of the victory was a general evacuation by the French of Flanders and Brabant.

From Ostend to Brussels and Louvain the whole region before the end of the year passed into the possession of the allies. Moreover, the battle itself produced such an effect on the German princes that they yielded to Marlborough's exhortations, and sent their troops to Italy, where the campaign, conducted by Prince Eugene, cleared the French out of the country.

Catalonia
During these two years also the allies were possessed with illusory ideas on the subject of the Spanish Peninsula itself. The plain fact was that the entire peninsula, with the exception of the kingdom of Portugal and the province of Catalonia, was on the side of Philip.

The Catalonians, who had been robbed of cherished political rights by the supremacy of Castile, flung themselves into the cause of the Archduke Charles; Portugal had confirmed the alliance with England which had originated at the time of the Restoration in England. Portugal and Catalonia gave the great maritime Power an entry to Spain both on the west and on the east.

Battle of Almanza
Imperial and British troops were sent to Spain, the latter under the command of the brilliant but exceedingly erratic Lord Peterborough. Successes of a remarkable character .were achieved in a most unorthodox manner; but it was no more possible for the English and Imperialists to carry oat an effective conquest of Spain against the will of the Spanish people than for France to achieve the same object a hundred years later.

Although in 1706 it seemed for a time that the Bourbon cause was lost, its ascendency was recovered in the following year at the battle of Almanza. The French on this occasion were commanded by the Duke of Berwick, an illegitimate son of James II, whose mother was Marlborough's sister.

Again in that year, 1707, Marlborough's great naval designs were frustrated. None of the allies could be easily persuaded to take part whole­heartedly in any share of a general scheme in which their own individual interests did not obviously the first place.

The clearance of Italy in 1706 opened the way for the invasion of France from the south-east. Marlborough designed such an invasion, with which the British fleet (as it must be called from this date) was to co-operate. The objective was to be Toulon, and the capture of Toulon would turn the Mediterranean into a British lake.

But since this presented itself as a merely British interest to the Austrians, no energy was applied to the project. All that Austria and Savoy really cared about was to secure the Italian land frontier against French invasion. During 1707 Marlborough himself was again engaged in diplomacy, not on campaigning. Charles XII of Sweden had started on his astonishing and meteoric career.

He had grievances against the Emperor, and there was serious danger that his sword would be thrown into the scale, in effect against the' Grand Alliance. In part at least it was due to Marlborough that the danger passed, and Charles plunged into Russia, a country which was just beginning to assume European importance under Peter the Great.

The situation at the end of 1706 looked so ill for France that Louis was prepared to seek peace with the allies on the terms of giving up the Bourbon claim to Spain and the Netherlands. The terms, however, were rejected by the allies, and the events of 1707 on the whole gave some encouragement to France.

Hence a vigorous defensive campaign was planned in the Netherlands for the next year. Marlborough was hampered as usual by the difficulty of obtaining the co-operation of the German forces, whose Northern army had now been placed under the command of the Elector of Hanover, the future George I of England.

Oudenarde
Eugene, however, released from Italy, was now bringing up a third army to the North; and with him Marlborough could always count upon cordial agreement. But before a junc­tion could be effected some of the recently occupied Netherland towns revolted against the Dutch ascendency, and the French were threatening Oudenarde.

Marlborough could not afford to wait for the whole of Eugene's army, though he was joined by Eugene in person. By rapid and skilful movements he was able to fling himself upon the French forces near Oudenarde and to inflict upon them a decisive defeat, though too late in the afternoon to effect the complete destruction of the French army. The victory enabled Marlborough to prevent the French from recovering Ostend, after another brilliant action had been fought by General Webb at Wynendael.

Minorca
Before the end of the year the important fortress of Lille surrendered. Another valuable capture bears further witness to Marlborough's understanding of the meaning of naval supremacy. It was owing to his urgency that a force was despatched to Minorca, Port Mahon seized, and the island occupied, a winter naval station in the Mediterranean being thereby provided for the British fleets. The design was carried out by Lord Stanhope; the island remained a British possession till its loss in 1756.