Navigate 'A History of the British Nation'
<< The Battle of the Boyne and Beyond - William III becomes King of Scotland - The Massacre of Glencoe, Causes and Consequences >> 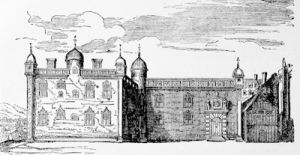 The Parliament House, Edinburgh, in the 17th century, from an engraving by Gordon of Rothiemay about 1650

The Killing Time
The reign of James II or James VII had opened in Scotland that period of cruel persecution known as the “Killing Time." To this era belong the most famous of the martyrdoms, the shooting of the carrier John Brown before the eyes of his wife, and the drowning of Margaret Wilson and Margaret McLauchlan in the Solway, with the latter of which, it may be remarked, Claverhouse was in no way concerned. But the persecuting policy was no more possible for James in Scotland than in England; it inevitably gave place in the Northern as well as in the Southern country to the policy of theoretical toleration.

In Scotland, as in England, it was not possible to aim at the advancement of Roman Catholics, or even at their general relief, without conceding a like freedom to the Nonconformist Protestants. In proportion as the law bore more hardly on a larger portion of the population, the Scottish Presbyterians were more ready than their English brethren to accept the Indulgence decreed by the king in both countries in 1687.

It must further be observed that there was not in Scotland, the same constitutional ground as in England for rejecting as dangerous gifts bestowed by the arbitrary power of the Crown, because the constitutional powers of the Crown were not limited either by custom or by statute as they were in England.

Yet the fact that the king's real purpose was the advancement of Papists was sufficiently manifest, and caused uneasiness and resentment on all sides. Opposition, however, was much more difficult to organise effectively, while the forces of the Crown were not merely, as in England, a coercive power which the Crown held in reserve, but a normally active instrument for the repression of opposition.

Thus the position in Scotland presented itself to James as perfect secure, and he had no qualms in summoning Claverhouse, who had now become Viscount Dundee, to lead the bulk of the Scottish troops over the border in the autumn of 1688. But by so doing his government lost the control of Scotland.

A stream of malcontents hurried to the South with the obvious intention of adapting their own further action to the course of events in England. The flight of James to France paralysed his supporters, and immediately after the formal acceptance of the crown of England by William and Mary, a Convention Parliament assembled in Scotland.

The Convention Parliament
In that Convention it became at once apparent that the majority were opposed to the return of King James. That disposition was enormously strengthened by a letter from James in which, with his usual blundering impolicy, he adopted a high-handed and threatening tone instead of recognising the necessity for conciliation.

Dundee and the Jacobites withdrew from the Convention, which proceeded to appoint a committee on the analogy of the Lords of the Articles, consisting of eight of the nobility, eight burgesses, and eight of the barons or gentry of the shires. This committee directed and formulated the further proceedings of the Convention.

The Convention in England, while it transferred the Crown from James to William, did not in theory effect a revolution of the constitution. Ostensibly it reaffirmed and safeguarded constitutional doctrines which had been set at nought by absolutist innovations. It was not so with the Scottish Convention, which went a long way towards asserting for Scotland these same English constitutional claims which in Scotland had never subsisted either in theory or in practice; and in some respects it went beyond the English formulary.

It drew up a Claim of Right corresponding to the English Declaration of Right; but instead of claiming that James had abdicated the throne by his flight it affirmed that James had forfeited the Crown, and, further, it asserted that prelacy, being opposed to the will of the people, ought to be suppressed.

Its determination to claim a constitution approximating to the English model was expressed by the denunciation of the system of appointing the Lords of the Articles by any other process than the free election of the members by the Estates, where­as the Stuart system required first the nomination by the peers of eight bishops who were inevitably king's men, the nomination by the eight bishops of eight peers who, in the circumstances, would also obviously be king's men, and the selection of the rest of the Lords of the Articles by this united group of king's men.

The Convention becomes Parliament
Thus the Stuart system had in effect given entire control of legislation to the king and the Privy Council; the new system would practically give it to the Estates. On these terms the crown was offered to and accepted by William, and the Convention was converted into a parliament.

<< The Battle of the Boyne and Beyond - William III becomes King of Scotland - The Massacre of Glencoe, Causes and Consequences >>


He ruled jointly with his wife, Mary

He was followed to the throne by Queen Anne