The Lindisfarne Gospels
This illuminated manuscript is a superb example of art from the Dark Ages (proving that the Dark Ages weren't pitch black). The Gospels were created around 700 A.D. by Eadfrith, bishop of Lindisfarne monastery on Holy Island (Northumberland). These are now in the British Library in London

As the story goes the monks took to the sea to escape from a Danish raid in the late 9th century. The Gospels, in a jewelled container, were lost overboard in a storm. Then a vision of St. Cuthbert appeared to one of the monks, telling him where to find the precious book. Sure enough, when the monks searched the shore at the spot indicated by the saint, the Gospels were found, intact but for a small seawater stain which can still be seen.

The Alfred Jewel
Located at the Ashmolean Museum in Oxford, this is another Dark Ages treasure. A small ornament of gold, crystal, and enamel, its use puzzled scholars for generations.  It is now thought to have been a decoration on the end of a pointer, used for following text in a book.  Its association with King Alfred evolves from the inscription "Alfred had me made" around the rim of the jewel. The attractive idea that it was actually owned by Alfred the Great is enhanced by the fact that it was found near his sanctuary at Athelney. 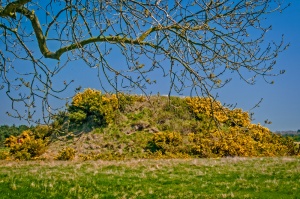 Sutton Hoo
At Sutton Hoo (Suffolk) a Saxon ship burial from the early 7th century was excavated in 1939. The haul, in archaeological terms, was staggering. Inside the hull of a wooden ship buried beneath an oval mound were the war gear and treasures of a Saxon leader, perhaps a "bretwalda" or king of Suffolk. No skeleton was found; apparently it had been destroyed by the acidic soil. But something else, something quite wonderful, did survive; a wealth of gold and silver goods of such fine workmanship as to dispel any notion that the Anglo-Saxons were nothing but crude barbarians. Included were a sword with gold and garnet fittings, drinking horns mounted in silver, and a heavy gold buckle or reliquary. These and much more are resident in the British Museum in London.

Anglo-Saxon Place Names
And to polish off this eccentric collection of Anglo-Saxon remains, here's something you can have some fun with: place names. The Anglo-Saxon and Danish settlers had an immense impact on what we now call the English language. Some of their most enduring remains are to be found in the place names that dot modern maps. Suffixes and prefixes often describe the history of a village. Here are a few examples to get you started:

Staffordshire Hoard
Archaeologists both professional and amateur regularly turn up ancient remains. By far the most famous recent find relating to the Saxon era is the Staffordshre Hoard, a startling treaure trove of Saxon-era weapons, golden decorations, and coins, buried in a farm field near Tamworth, Staffordshire. The Staffordshire Hoard is the largest single discovery of Saxon gold in one location, outshining even the famous ship burial at Sutton Hoo. As of this writing, artefacts from the Hoard are on tour at various museums around the region. Official website.

These are just a few of many examples. By the way, there are no prizes for figuring out the origin of the name "Oxford".