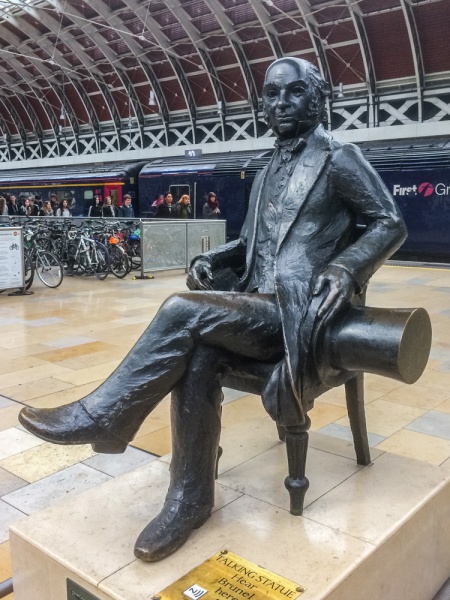 Isambard Kingdom Brunel was born on April 9, 1806, in Portsmouth. His father, Marc Isambard Brunel, was a prominent engineer, and he determined that his son should follow in his footsteps. Brunel the younger was educated in France, and at the tender age of 20, he became the resident engineer on his father's Thames Tunnel project.

Brunel was injured seriously when the tunnel was flooded. While he was recuperating from his injuries, Brunel entered a design competition for a new bridge over the Avon Gorge. The judge of the competition was the Scottish engineer Thomas Telford. Telford rejected all designs in favour of his own.

After considerable scandal, a second competition was held and one of Brunel's designs was selected, though lack of money delayed construction until after Brunel's death.

Brunel then carried out a number of dock designs at Bristol, Brentford, Milford Haven, and Plymouth. He became intrigued by the new field of railway engineering, and in 1833 he became chief engineer to the Great Western Railway.

He introduced a wider gauge track (the gauge is the distance between the two rails) in an effort to improve train speed. This resulted in the "Battle of the Gauges" between Brunel's design and the narrower gauge championed by George Stephenson. The matter was not decided until the late Victorian period when the narrower gauge became the recognized standard.

His most remarkable feat for the GWR was the Box Tunnel, between Bath and Chippenham. This amazing tunnel was two miles in length and took almost six years to complete. When the crews tunnelling from each end finally met in the middle, they were found to be a mere 1 1/4 inches out of alignment.

Brunel oversaw every aspect of railway design, from the track itself to the track layout, bridges, tunnels, rolling stock, even the lamp posts for the railway stations! He was not above rolling up his sleeves and joining his workmen in their digging.

Brunel followed his new passion for railways around the globe, designing lines in Italy, Australia, and India. He was responsible for over 1,000 miles of track in Britain. He was famous for his railway bridge design, and his Maidenhead Bridge had the flattest brick arch in the world. He also pioneered the use of compressed air to sink pier foundations underwater.

Railways did not take all of Brunel's attention; he was responsible for great advances in marine engineering as well. His Great Western paddle-wheeler (1837) was the first steamship to provide regular transatlantic service.

The Great Britain (1843) was the first major ship to use a screw-propeller, and Great Eastern (1858) was the first iron double-hulled ship, and was responsible for laying the first successful telegraph cable across the Atlantic. Each of the three ships was the largest in the world at the time of its construction.

Brunel also designed artillery and hospitals for the Crimean War effort, as well as an ingenious armoured barge.

Isambard Brunel was a short, neat man, who stood just over 5 feet tall. He seems to have been self-conscious about his height, and he favoured tall top hats to make himself appear taller. He was a workaholic, often labouring 18 hour days and sleeping at his office in Duke Street.

When Isambard Kingdom Brunel died in London on Sept. 15, 1859, the world lost one of its truly great engineering masters.