HERITAGE HIGHLIGHTS:   The remains of Brunel's 'Eighth Wonder of the World' Thames Tunnel 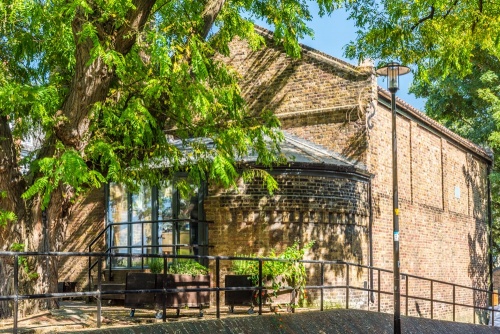 The Thames Tunnel in London was described as the Eighth Wonder of the World when it opened in 1843. The tunnel under the River Thames was the brainchild of the Victorian engineer Marc Brunel with his son Isambard Kingdom Brunel acting as the resident engineer. This was Isambard Kingdom Brunel's first project and the only one on which the father and son worked together.

The Thames Tunnel crosses under the River Thames between Rotherhithe on the south bank to Wapping on the north. It was the first tunnel under a river in the world. The tunnel was designed by Marc Brunel and began construction in 1825. Brunel's innovative scheme called for a tunnel shield made of 36 separate cells, each holding one workman. The shield was driven by a screw that moved the device forward by the width of a single brick at a time.

Construction was slow, and hampered when the river broke through the barrier. On one occasion Marc Brunel's son Isambard, then a teenager, narrowly escaped drowning. Isambard Brunel would go on to become one of the world's great engineers, designing the Great Western Railway, the Clifton suspension bridge and the SS Great Britain among other projects. 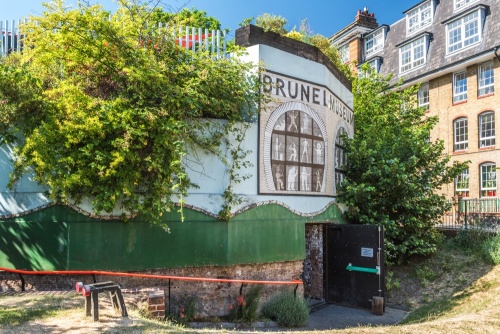 Interruptions from flooding made for cost overruns, and at one point construction stopped for seven years when the money dried up. The tunnel eventually opened in 1843. It stretched 1,506 ft (406m) and was 23 ft high and 37 ft wide (7m x 11m).

It was designed primarily as a foot tunnel, but it was eventually sold to the railways and became part of the London underground system in 1865.

The tunnel is still used by the underground, and so is inaccessible to visitors, but the huge Entrance Hall shaft that drove down vertically into the earth on the Rotherhithe end of the tunnel has been restored and now forms the centrepiece of the Brunel Museum.

Think of the shaft as a gigantic pastry cutter, slicing down into the soft earth beside the river. The shaft is 50 ft in diameter (about 15m) and is 50 ft deep.

The iron shaft was nearly Isambard Kingdom Brunel's grave. On 12 January 1828, the river burst through the partially-built tunnel, flooding the shaft. Six men died in the rising water, but Brunel, still a teenager, was washed so high that a foreman was able to break through a locked emergency exit, grab his coat collar and haul him to safety. 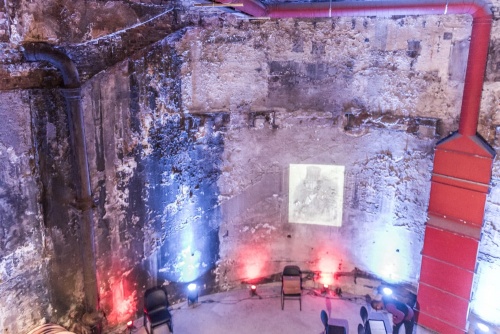 Inside the Grand Entrance Hall shaft

The museum entrance leads straight into the historic Engine House, now transformed into an exhibition area with displays focussed on Brunel's first and last major engineering projects; the Thames Tunnel and the Great Eastern.

The display includes colourful prints, statues, and models telling the dramatic story of the Thames Tunnel, as Brunel and his team battled against flooding and tragic deaths to create one of Britain's great engineering triumphs. See original objects connected to Brunel and watch a short film on his life and career.

One of the most intriguing exhibits is a cross-section model of the shaft and shield used to build the Thames Tunnel. 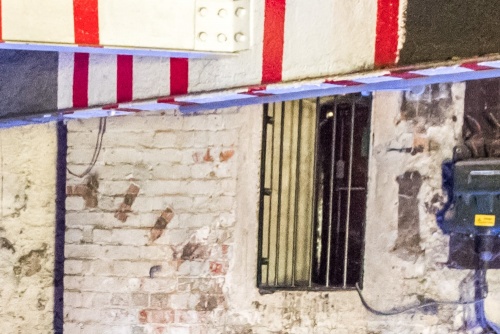 The emergency hatch where Brunel's life was saved

While the Engine House is worth seeing, the real star attraction in the Brunel Museum is the historic Grand Entrance Hall, the world's first caisson. The huge Hall is a cylindrical structure where work on the Thames Tunnel began. It was also so nearly the place where Brunel lost his life by drowning. You can see the small hatch near the top of the structure where he made his narrow escape from the rising waters.

When the Thames Tunnel opened in 1843 the Hall was the most popular visitor attraction in the world, welcoming one million visitors in its first three months. Brunel took advantage of the tunnel's popularity to hold banquets and fairs inside the structure. It seems appropriate, then, that the Hall is once more used to host theatrical events. When we visited there was a theatrical group rehearsing for a performance on the floor of the Hall.

The cavernous 'sinking shaft' has been made more accessible with a cantilevered staircase allowing visitors to climb down onto the floor of the cylinder. When underground trains first started using the Thames Tunnel in the 1860s the shaft was used for ventilation. The walls of the cylinder are blackened by years of smoke from steam-driven underground trains. The top of the shaft has been transformed into a rooftop garden area. 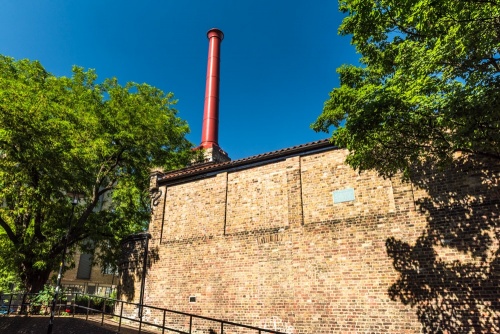 The museum offers regular 'Brunel’s London' boat trips along the River Thames, linking several famous sites linked to Brunel. The trips include 40 minutes on a boat, a 40-minute river walk, and a 40-minute train journey. See the official website for dates and times.

The museum stands in landscaped grounds on the south bank of the River Thames. An enclosed lawn on the south side of the museum is planted with trees and shrubs selected by Brunel for his mansion in Devon. Here you will find a grinding wheel from Brunel's Great Eastern.

To the north is a peaceful treed terrace with benches shaped like different Brunel bridges around Britain. The bridges depicted include the Maidenhead Bridge (1834), the Hungerford Suspension Bridge (1846), and the Royal Albert Bridge across the River Tamar in Cornwall. The trees are false acacia, one of which - known as the Frankenstein Tree - is held together with steel bolts. 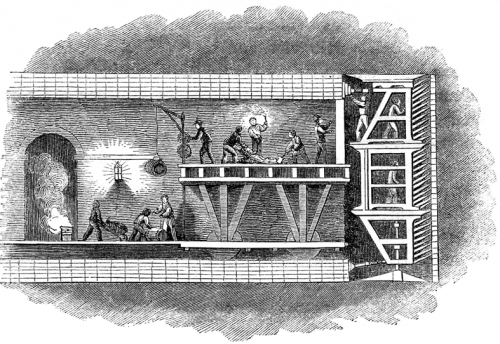 The Thames Tunnel shield, from the Illustrated London News

The museum is located just 100 yards from the Rotherhithe rail station (London Overground). From the station exit turn north on Railway Avenue and you will see the museum ahead of you on the left. The closest underground stations are Bermondsey and Canada Water (Jubilee Line) both about 10 minutes walk away. The 381 and C10 buses also stop at Rotherhithe station.

The museum is run by an educational charity, with assistance from the Heritage Lottery Fund. There are regular concert and theatre events.

We thoroughly enjoyed the museum and our guided tour of the Entrance Hall shaft.

If you are interested in Isambard Kingdom Brunel you may want to see his statue inside Paddington rail station, another statue in Victoria Embankment Gardens, and the grave he shares with his father Marc Brunel in Kensal Green Cemetery. 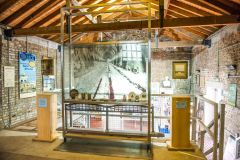 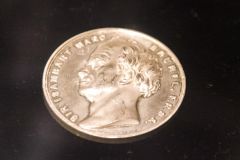 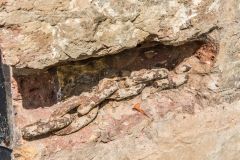 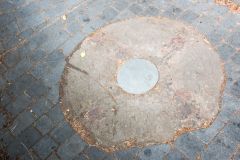 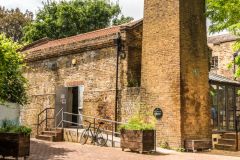 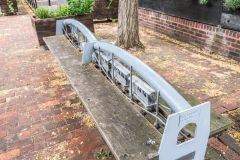 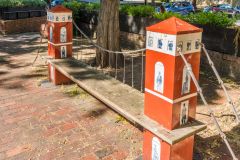 More self catering near Brunel Museum