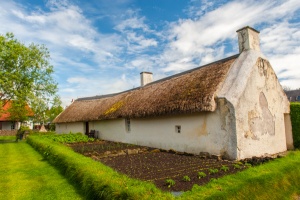 Robert Burns was born at Alloway, near Ayr, on January 25, 1759. His father William was a gardener to the Provost of Ayr. Robert was educated briefly at John Murdoch's school in Alloway and later in Ayr.

Family financial worries forced Burns to work as a farm labourer, and it was while thus occupied that he met his first love, Nelly Kirkpatrick. She inspired him to try his hand at poetry, a song entitled "O, once I lov'd a bonnie lass", set to the tune of a traditional reel.

Burns worked at a succession of labouring jobs, including flax dressing, and began writing poetry regularly. When his father died in 1784, Burns and his brother Gilbert rented a farm near Mauchline.

Burns spread his affections freely, and the next decade saw eight illegitimate children born to him through five different women. One of these, Jean Armour, became Mrs Burns in 1788.

The first published work of poetry by Robert Burns was "Poems, Chiefly in the Scottish Dialect" which saw the light of day on 31 July 1786. This collection of verse contained many of Burn's best works, including "To a Mouse", and "The Holy Fair".

The success of "Poems, Chiefly in the Scottish Dialect" convinced Burns to abandon plans to emigrate to Jamaica. Buoyed by his burgeoning reputation as an unschooled "ploughman poet", Burns moved to Edinburgh and became part of the thriving cultural scene there.

He was unable to find a patron to support his writing, but publisher James Johnson gave him work editing a collection of Scottish folk songs. This work, titled "The Scots Musical Museum", was published in 5 volumes over sixteen years. Burns himself contributed over 150 songs, including "Auld Lang Syne", a reworking of an earlier folk song of unknown origin.

Burns and his wife Jean moved to Mauchline, where in 1790 he produced "Tam o' Shanter", which was first published merely as an accompaniment to an illustration of Alloway Kirk, in a volume of "Antiquities of Scotland". The growing Burns family moved again, this time to Dumfries.

Burns contributed 114 songs to "A Select Collection Of Scottish Airs" by George Thomson, but he received very little payment for his efforts. In 1795, Burns was inspired by the events of the French Revolution to write "For a' that and a' that", his cry for human equality.

One year later, on July 21, 1796, Burns was dead of rheumatic fever. He was buried in the churchyard of St. Michael's in Dumfries, even as his wife Jean was in childbirth with their ninth child.

Robert Burns gained more fame after his death than he ever did during his lifetime. Many of his songs and poems have become international favourites - even among those who find his use of Scottish lowland dialect difficult to decipher.

Alloway (near Ayr)
Burns Birthplace - this single room thatched cottage is now a museum of Burns' life and work.