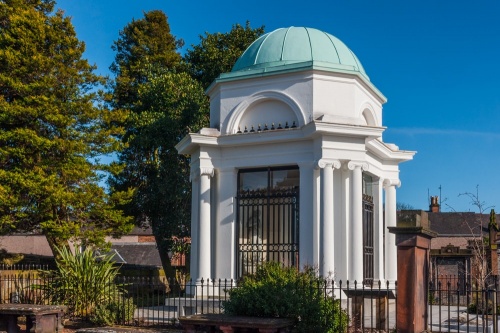 When poet Robert Burns died in 1796 his body lay in state at Midsteeple, just off the High Street in Dumfries. From there he was carried to the churchyard of St Michael's Church, the parish church of Dumfries, where he was laid to rest in the north-east corner of the churchyard. His burial place was marked only with a plain stone grave slab.

The unpretentious grave presented problems. Burns' poetry was so popular that people coming to pay their respects had a hard time finding the grave. Fellow poet William Wordsworth and his sister Dorothy visited Dumfries and 1803, just 7 years after his death, and had a difficult time finding the grave site.

Burns' friends and admirers thought that the poet deserved a more impressive memorial, one that would reflect his literary importance. 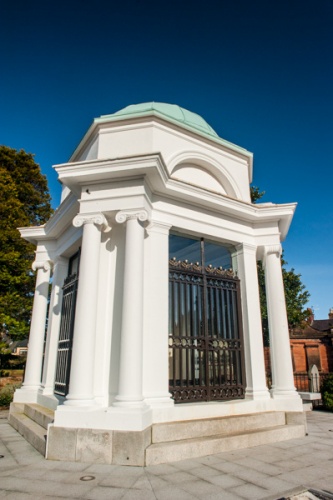 A closer look at the Mausoleum

One of those friends was John Syme. In 1813 Syme formed a committee with the aim of launching a public appeal for funds to build a suitable mausoleum to remember Burns. The appeal was successful, even drawing a contribution from the Prince Regent (later to become King George IV).

The mausoleum was finished in September 1817 to a design by Thomas Hunt. Hunt was inspired by the Darnley Mausoleum at Cobham Hall in Kent, itself designed by James Wyatt.

It was actually built by a local stonemason named John Milligan at a cost of just over £300. Though the structure was completed in 1817 Burns' body was moved to its new home in 1815 while the mausoleum was being built.

Burns' wife Jean Armour was interred beside her husband in 1834. At this time a plaster cast was made of Burns' skull. Also buried in the mausoleum is the couple's son Maxwell Burns, who died in 1799 at just 2 years and 9 months old, and Francis Burns, another son who died in 1803 at 14 years old.

The mausoleum takes the form of a neoclassical rotunda with pairs of Ionic columns supporting an octagonal drum with a dome at the top. Within the mausoleum is a group of sculptures by Peter Turnerelli. 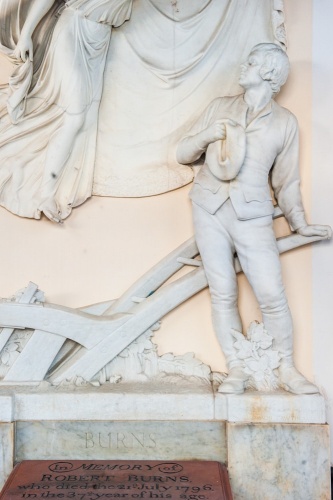 Sculptures inside the Mausoleum

The sculptures show the ancient Muse 'Colla', a representation of the Ayrshire region of Kyle where Burns was born, throwing her mantle over Burns while he ploughs a farm field. The cloak is a mantle of inspiration, a reflection of how Burns' life early life in Ayrshire inspired his poetry. Colla's mantle of inspiration summons Burns the ploughman to become Burns the poet.

The original sculptures were replaced by copies sculpted by Hermon Cawthra in 1936. They were installed as part of an effort to restore the mausoleum and were unveiled by Prime Minister Ramsay MacDonald.

The mausoleum is made of local red sandstone. Around 1880 the structure was painted bright white, with the dome a pale green. The base of the mausoleum is open on three sides, but each of these sides is now protected by an iron gate so that you can see within but cannot actually enter the building.

During the 19th century the Dumfries Burns Club began a custom of laying a wreath at the mausoleum on Burns' birthday (25 January) and the custom continues to this day.

The Burns Mausoleum is listed Grade A for its heritage value. 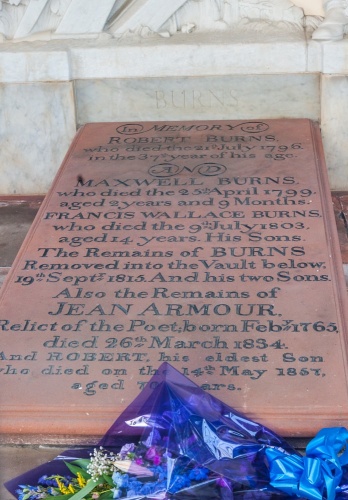 It is fascinating to contrast the ornate mausoleum with the original site of Burns' grave in the north-east corner of the churchyard. This part of the churchyard is tightly packed, with graves jostling for position. A simple black plaque affixed to an iron railing shows where Robert Burns was originally buried though there is no sign of the original gravestone.

It is worth taking some time to explore St Michael's graveyard. There are numerous examples of historic gravestones and tombs around the graveyard., including the graves of several Covenanters. Look for the Covenanters Monument, installed in memory of the many people who died for their consciences during the religious turmoil of the late 17th and early 18th centuries. 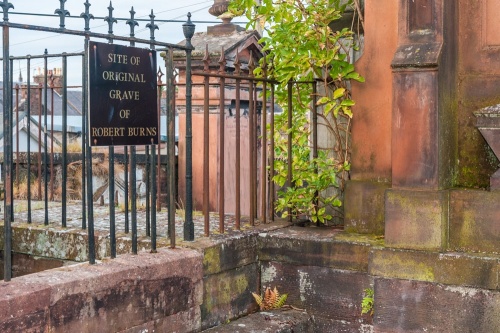 St Michael's churchyard is easy to find. It stands at the corner of St Michael Street (the B725) and St Michael's Bridge Road (the A756). There is no dedicated parking but there are several pay and display parking areas nearby. There is an information panel with a map of the graveyard at the entrance, which makes it easy to find major graves around the packed churchyard.

The Burns Mausoleum is in the south-east corner of the churchyard, while the original burial site is in the north-west corner. It is a very short walk from the churchyard to the Burns House Museum where Burns died.

Isle of Skye Sunset, Waternish Prints
PUT THE BEST OF BRITAIN ON YOUR WALL

Self Catering near Dumfries