Burns Birthplace Museum
The Burns Museum site takes in a wealth of sites in Alloway associated with poet Robert Burns, including the thatched cottage where the poet was born, Alloway Auld Kirk, The Poet's Path, the Burns Monument, and Brig O' Doon, where you can stand in the very place that Tam O' Shanter escaped from the witches.

This modern purpose-built structure stands near the Burns Monument and garden. The museum building was designed with large expanses of window space to allow visitors to enjoy the landscape that inspired so much of Burns' poetry. 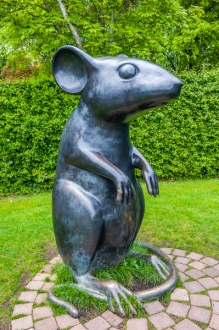 The interior of the museum is full of Burns memorabilia, including personal belongings, writings, and other mementoes. But this is much more than just a series of static exhibits; the National Trust for Scotland has gone to great lengths to create a modern museum with interactive features that will appeal to all ages. You can play songs from a Burns playlist, and sit by a pulpit and be harangued by a preacher as Burns was on several occasions.

One of the interesting activities visitors can enjoy is creating a shadow portrait like the example here, and sending the finished photo by email to yourself as a souvenir. Its a clever idea - though it does not have anything in particular to do with Burns himself, other than the fact that making silhouettes was a popular pastime in the late 18th century when Burns lived. But that's a minor quibble; the museum does cover a wide range, from Burns and his life, to life in general during the late 18th century, and they've done a good job of making it appealing to a wide variety of visitors.

This winding path leads from the main museum to Burns Cottage, where the poet was born. The path is decorated with sculptures illustrating Burns' most popular works. Among the most amusing sculptures is a human-sized mouse standing on its hind legs. This was sculpted by Kenny Hunter and is based on a real mouse caught by the sculptor's cat one day while he was searching for inspiration for the Poet's Path work.

Beside the path are a series of weather-vanes each depicting a scene from the Tam O' Shanter tale, which of course was set here in Alloway. It is fascinating to walk through the very landscape that Burns was writing about. If you don't fancy a walk, you can take the free passenger shuttle that runs from the museum front entrance to the end of Poet's Walk every few minutes during the day (and the driver is very friendly!). 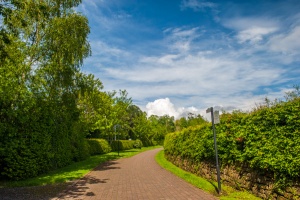 This long, low, thatched building fronts onto Alloway High Street, but the main entrance is off the parking area behind the building, beside a small garden with an education centre on one side.

Robert Burns was born in the cottage on 25 January 1759, and spent the first 7 years of his life here. The cottage was built by Robert's father, William Burn. It has four rooms, two for humans and two for tending animals. There is a small kitchen and parlour for the family linked to a byre and barn area.

In the kitchen is a box bed set into an alcove, and it was here that Burns was born. The parlour, or 'spence', was where the young Burns received his early education from tutor John Murdoch.

The National Trust for Scotland has decorated the cottage interior with verses from some of Burns' poems. It does help evoke the character of Burns' poetry and his links to his humble upbringing, but seeing the cottage altered like this won't be to everyone's taste.

Directly outside the cottage is a 'kailyard', or vegetable garden, and beyond this a large ornamental garden with flowers, shrubs, and a statue of the poet half-hidden amid the foliage. This is a pleasant place, and it does help give an idea of how Burns and his family lived, and how his childhood years helped influence and inspire his later poems. 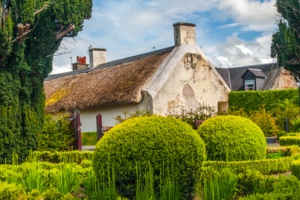 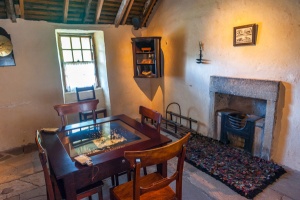 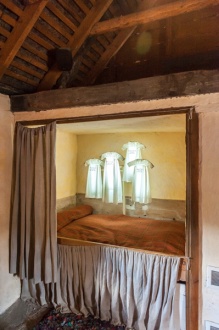 The box bed where
Burns was born

Almost across the road from the Victorian church that replaced it is the roofless ruin of the Auld Kirk. The kirk was built in 1516 and was used for worship until 1756. It seems to have become roofless soon after it ceased being used for regular worship.

Directly inside the kirkyard entrance is the grave of William Burns, Robert's father. Unfortunately, the gravestone is not original, as the original was broken up and carried away by souvenir hunters. The rear of the gravestone is inscribed with an epitaph to his father composed by Burns himself.

Arranged around the church like paving slabs are small stones inscribed with verses from Burns' poems. You cannot enter the church itself, just walk around the exterior and peer through the open windows into the roofless interior. It is, however, a very pleasant spot, especially when sunlight filters through the surrounding trees and dapples the kirkyard like a surrealist painting!

The kirk appears in one of Robert Burns' most famous poems, Tam O' Shanter. In the poem, Tam is on his way home from a night of revelry when he sees strange lights and hears music from the ruined church. He peers in the window and sees a group of witches dancing to the music of bagpipes played by the Devil. Tam disturbs the witches and has to flee for his life across the nearby Brig O' Doon. 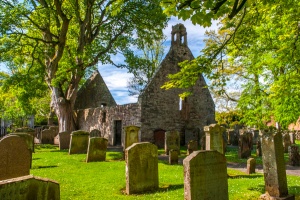 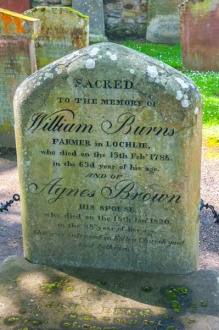 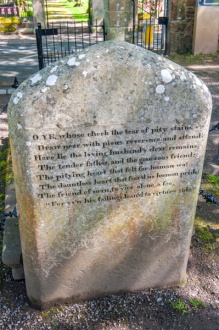 Epitaph to his father,
by Robert Burns

Down the hill from the Auld Kirk and almost opposite the lower entrance to the Burns Monument garden is the late medieval bridge across the River Doon, immortalised by Burns as the Brig O' Doon.

The bridge may have been built by Bishop Kennedy, Chancellor of Scotland, sometime around 1460. It has a span of 72 feet, large for a 15th-century single-arch bridge, and a rise of 26 feet.The earliest contemporary record of the bridge dates to 1512, and it was apparently ruinous by 1593.

In the poem Tam O' Shanter, Tam flees for his life across the bridge, pursued by witches. He reaches the keystone in the centre of the bridge just as one of the witches grasps the tail of his horse. The horse gives a final leap, and the witch is left behind, holding the horse's tail.

You can still see the keystone, and walk across the cobbled surface of the bridge, for wonderful views back to the Burns Monument. The trail ends there, however, and you have to retrace your steps to the near bank of the bridge.

As a final note, the Brig can be seen on Bank of Scotland 5 pound notes issued in 2007. 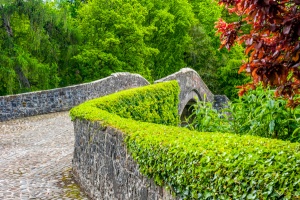 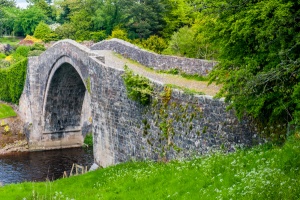 The bridge from the far bank

Set in the middle of a colourful garden is a neo-classical monument commemorating Robert Burns. The monument was created by Thomas Hamilton of Edinburgh following a design competition in 1812. Hamilton would later design a monument to Burns in his own city.

The monument has a three-sided base supporting a circle of Corinthian columns, rising to a domed cupola. Each of the three sides is oriented towards one of the three traditional divisions of Ayrshire; Carrick, Cunninghame, and Kyle. In the basement is a marble bust of Burns, added in 1845 and sculpted by Patric Park.

The monument is replete with strange Masonic symbols, for both Burns and Hamilton were Freemasons. You can climb to the top of the monument for wonderful views across the gardens below, and over the nearby Brig O' Doon.

A few steps from the monument itself is a small neo-classical building like a glorified garden shed. This contains as set of models, or sculptures, of characters from Burns' most enduring poems. These sculptures by James Thom of Tarbolton were immensely popular during the 19th century, and went on tour across the UK, where hordes of visitors flocked to see them. Figures include Kirkton Jean, Tam O' Shanter, and Souter Johnnie, all having a good laugh while drinking. 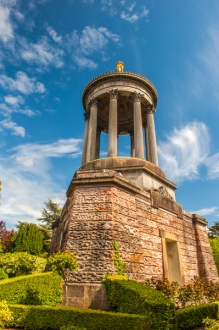 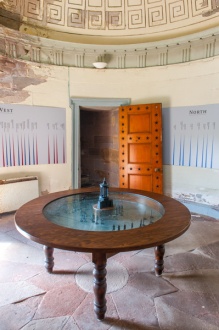 Inside the monument base 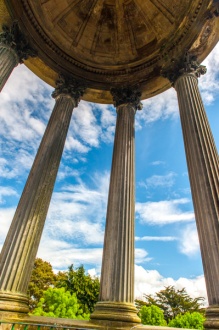 The viewing area under
the monument's dome 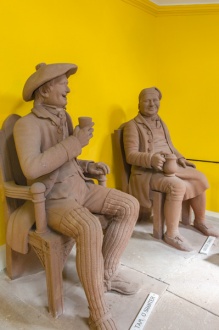 Tam O' Shanter and Souter
Johnnie figures in the garden

By far the easiest way to visit all the Burns sites in Alloway is to park at the main museum parking area. From there you can follow Poet's Path to Burns Cottage, a walk of no more than 10 minutes if you saunter. Then you can retrace your steps to the museum, or to Alloway Auld Kirk, which is within a stone's throw of the Memorial garden.

From the garden and memorial you can see the cobbled surface of the Brig O' Doon, another few minutes stroll further on.

The museum and Burns Cottage offer a pamphlet with a map and short guide to all of the Alloway sites associated with Burns, so you won't get lost! In any case the major sites are very well signposted, so you shouldn't have any trouble finding anything.

The Brig O' Doon and Alloway Auld Kirk won't take more than a few minutes each to explore. Burns Cottage will take considerably longer, but not nearly as much as the Museum, which is so full of interactive exhibits that you could easily spend 60-90 minutes exploring the entire collection. 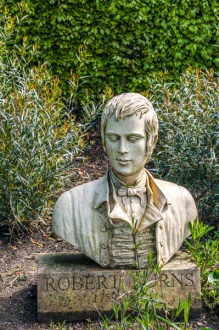 Bust of Robert Burns in
the Cottage garden 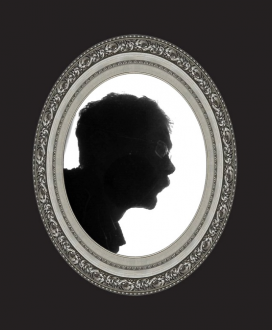 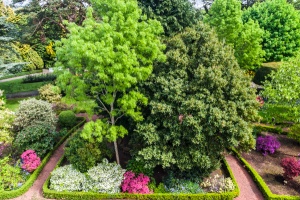 Burns Memorial Garden
from the Monument

Nearby accommodation is calculated 'as the crow flies' from Robert Burns Birthplace Museum. 'Nearest' may involve a long drive up and down glens or, if you are near the coast, may include a ferry ride! Please check the property map to make sure the location is right for you.