Follies in the English Landscape

If ever an architectural feature expressed an aspect of national character in tangible terms, the English love of that peculiarity we call a "folly" does so. Just for the purpose of definition let us call a folly an architectural construction which isn't what it appears to be. Although most of the buildings we now call follies are a part of English garden and landscape design, a folly need not be part of a garden. 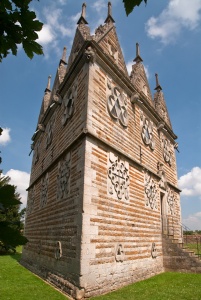 The first rush of folly construction in England seems to have been precipitated by Sir Thomas Tresham's Rushton Lodge (1595). The Lodge was an exercise in expressing Tresham's views on the secret symbolism of numbers, the Passion of Christ, and the Trinity. Its symbolism was based on ... yes, the number three. There are three sides to the lodge, three floors, three trefoil windows on each floor, and three smoke-holes in the chimney!

And there we have a perfect example of what is behind many, though certainly not all, follies - a symbolic statement. Many follies are constructed as tangible symbols for certain ideas or ideals. Rushton Lodge was concurrent with another early folly, Preston Tower in Surrey (also 1595).

As the 17th century began, so did a craze among the well-to-do of building follies of all description. But that was nothing compared to what was to follow in the 18th century.

At Stowe, Lord Cobham built the Temple of Ancient Virtue in classical style, then matched it with a purpose-built ruin, the Temple of Modern Virtue, to emphasize his strong philosophic and political leanings. To the educated classes of the day, such subtle symbolism as an intentional ruin of modern virtue would not be lost.

The trend towards classical ruins in landscape architecture was brought about in part by the popularity of The Grand Tour in the 17th century. Young men (only occasionally young women) toured Greece and Italy, and many came away romantically impressed with the ruined classical buildings they saw there. Back in England, they attempted to introduce many of the same themes they thought they had seen on their travels.

This "picturesque" vogue led to the creation of mock gothic ruins and ancient temples scattered with seeming random abandon about the landscape of many grand houses. 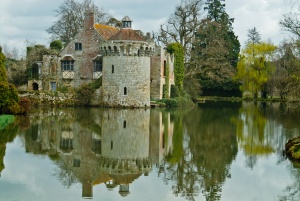 Another popular architectural device was the pyramid. There are pyramids at Castle Howard (as well as mock-fortifications), Farley Mount (Hampshire) and St. Ives (Cornwall). More eccentric still was the mock village, and the sham castle, as at Mow Cop (Cheshire). At Scotney Castle (Kent) the old castle was deliberately made into an ivy-clad romantic ruin when the new house was built.

The Sham Castle at Bath only partly deserves the tag "folly" - it was built to experiment with an architectural principle later used on the owner's house.

Among the more remarkably eccentric follies is the gigantic pineapple building built at Dunmore Park by John Murray, Earl of Dunmore.

The most common form of folly was without a doubt, the tower. There are too many tower follies to mention them all, but notable towers were built at Faringdon (Oxon), Leith Hill Tower (Surrey), and Wainhouse's Folly (Halifax).

Even more entertaining than the buildings themselves are the stories associated with some of them. At Dallington, in Sussex, the local squire swore to his dinner guests that he could see the tower of the village church from his window. When this proved impossible, he promptly built a pyramid called the Sugar Loaf on his own land, with the pointed peak of the pyramid approximating the spire of the church. At least the pyramid could indeed be seen from the house.

The passion for extravagant follies dwindled as the 18th century waned, but it can never be said that it died out entirely. Some might claim that the humble garden gnome or pink flamingo is merely a small-scale folly. And certainly, the English love of the peculiar, the eccentric statement of individuality, lives on.