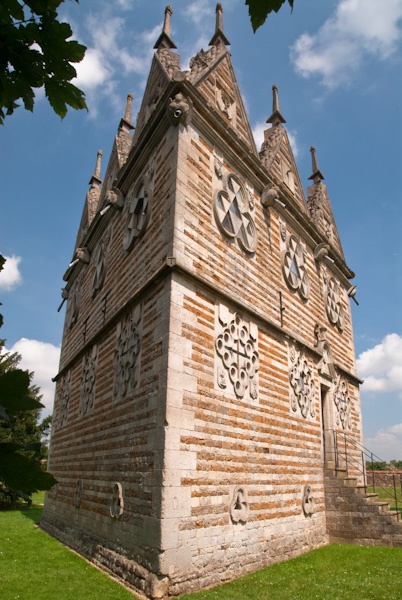 One of the most striking buildings in England, Rushton Triangular Lodge was built by Thomas Tresham between 1594-1597. Tresham, the father of one of the Gunpowder Plot participants, was a firm Roman Catholic. He was frequently fined for his views and devised the Lodge as a way of expressing his commitment to the Catholic faith. The Lodge is based on an equilateral triangular, symbolic of the Holy Trinity.

More than just the building's shape is meant to convey Tresham's beliefs; everything about this extraordinary building is symbolic, from the triangular shape to the use of the trefoil window designs, which were also used by Tresham to represent his family.

Everything revolves around the number three and its multiples. The sides are 33.33 feet long, or one-third of 100 feet. It is three stories high and has three windows per side. There are three gables on each side.

Above the entrance door is a Latin inscription reading 'Tres Testimonium Dant', a Biblical quotation from the Gospel of St John which translates roughly as 'there are three that give witness'. But, as with everything about the Triangular Lodge, even this inscription has multiple meanings; it is also a joke upon the fact that Tresham's wife always called him by the nickname 'Good Tres'. 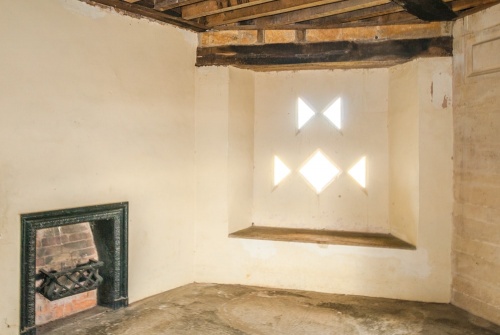 The lodge is built of alternating courses of sandstone and limestone, creating a layered stripe effect of red and cream. The exterior is decorated with fanciful heraldic designs and coats of arms.

Despite its ornate design, the Triangular Lodge also fulfilled a very practical purpose; it was built to house the head warrener charged with looking after Tresham's rabbits. Remains of the rabbit warren can still be seen nearby.

Thomas Tresham was a fascinating character. He inherited a large estate at the age of only 15, and became one of the most influential men in Elizabeth I's court, helped by an advantageous marriage into the Throckmorton family (see Coughton Court). However, his lavish spending combined with heavy fines for his Catholic beliefs left Tresham with heavy debts.

After Tresham's death in September 1605, his son, Francis, became involved in the unsuccessful Gunpowder Plot to kill James I. Francis was executed for his part in the plot, meeting his death in December 1605, just three months after his father.