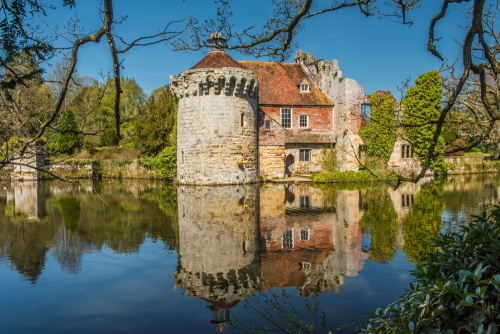 In 1377 French ships raided the Sussex coast, causing widespread damage and panic among the local population. Roger de Ashburnham, Conservator of the Peace in Kent and Sussex, decided to build a castle to guard against the threat of further invasions.

He chose a site on the River Bewl, at the bottom of a wooded valley just south of Lamberhurst, and there he built a quadrangular castle on a pair of islands, surrounded by a wide moat. The moat also encloses an outer courtyard and the stumpy remains of a ruined gatehouse.

Only one of the original four towers still stands, topped with a later conical roof and bristling with machicolations. It looks for all the world like a fairytale castle tower, so much so that you almost expect to see a Disney fairy princess at the upper window of the tower.

It is possible that the quadrangular castle was never actually finished, and what we see today is a large part of the completed structure. The south tower we see today was recorded as the only tower standing in 1558.

The tower is connected to a later Elizabethan manor house, built by the Darrell family. Thomas Darrell owned the castle in the late 16th century, at a time when Catholicism was illegal. For seven years between 1591-1598 Darrell harboured a Catholic priest in a secret chamber inside the castle. You can see the secret chamber, hidden behind a cupboard door set into the stairwell.

On one occasion the priest, a Jesuit named Father Richard Blount, was forced to flee over a wall and across the moat to escape a raid by the authorities.

An east range was built by William Darrell around 1630, possibly to a design by Inigo Jones. Darrell had most of the medieval castle pulled down and connected his new house to the surviving tower. The manor followed the same route to decay as the medieval castle, and together they form the centrepiece of a magnificent hillside garden. 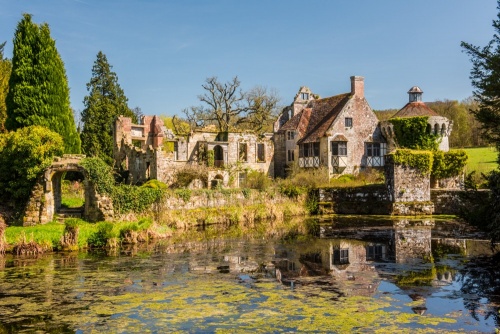 The ruined castle and moat

In 1778 Edward Hussey bought Scotney from the Darrell family. Around 1830 his grandson, also named Edward, called in architect Anthony Salvin to create a new Victorian mansion at the top of the hill, looking out across the valley towards the riverside ruins.

Salvin was one of the most popular society architects of his day and was known for designing houses in a mock-Elizabethan style. Not only did Salvin design the house, he also designed some of the furniture, for example the four-poster bed in the aptly named 'Salvin Bedroom'.

The picturesque view towards the medieval castle was accentuated by quarrying away part of the hillside for building stone. One unexpected treasure lurks in the quarry; the footprint of an iguanodon, left here over 100 million years ago.

Hussey planted a profusion of trees and masses of azaleas and rhododendrons, so that Scotney is a blaze of colour in early summer. His descendant, Christopher Hussey, left the estate to the National Trust, and the Trust has its regional headquarters here. Margaret Thatcher had an office in the mansion, and the house appeared in the 1979 film Yanks, starring Richard Gere.

In recent years the mansion house has been restored and opened to the public. There is a timed admission system to keep the numbers of visitors in the house at any one time down to a manageable level, but I highly recommend waiting for an available time slot; the mansion is a wonderful Victorian house, with richly panelled staterooms, and a mix of 'upstairs' and 'downstairs' rooms open to view. You really get a sense of what it was like to live and work in a large Victorian country house.

Look for the Hussey family coat of arms over the door with its Latin motto 'Vix ea nostra voco', which translates loosely as 'we scarcely call these things our own'. 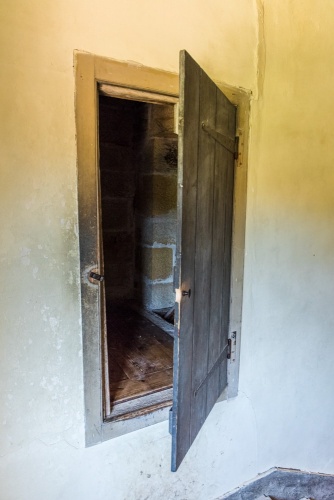 From the Library, you get a wonderful view down the hill to the ruined castle and the picturesque garden that surrounds it. You can also see as far as the historic house of Finchcocks and to Goudhurst village.

Another unexpected delight is a series of watercolour paintings by Henrietta Windsor-Clive, the great-granddaughter of Clive of India. The paintings depict Henrietta's travels in Italy prior to her marriage to Edward Hussey III, who built the house.

The estate stretches to 770 acres, with trails through the hillside gardens and through lovely woodland. It truly is a gorgeous location; the garden is a delight, and the views across the wooded valley are superb. 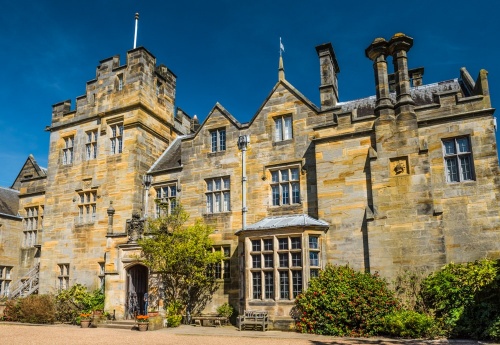 Scotney is a gem; the views from the winding path down the hillside gardens prepare you for the Old Castle, but it is only when you walk around the moated site that it really hits you how pretty it is.

Some of that 'prettiness' is forced; it's a deliberate attempt by Edward Hussey to create a picturesque landscape, but in this case, it works so well that you don't mind if Hussey accentuated the ruined state of the medieval castle and Elizabethan manor for artistic effect. It works! I've seldom seen a more wonderfully romantic English castle. 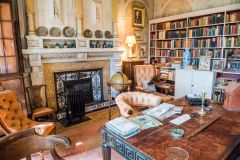 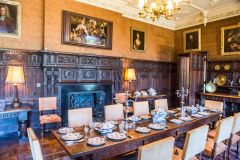 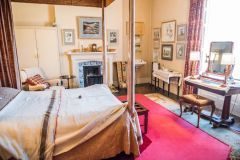 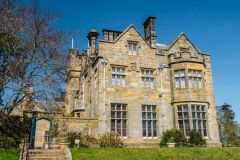 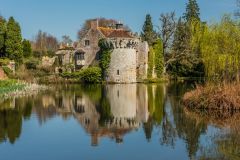 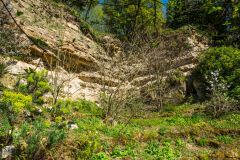 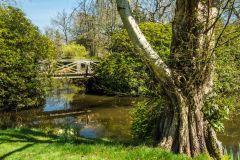 More self catering near Scotney Castle