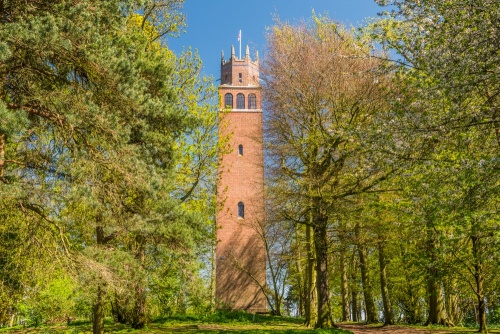 Faringdon Folly was the last [intentional] folly to be built in England. It stands 100 feet high and dominates the landscape above the historic market town of Faringdon. The folly was built by Lord Berners of Faringdon House in 1935 and offers superb views over 5 counties on a clear day.

The hill has always been known as Folly Hill, even when there was no folly to crown it! Before the Roman invasion, a hillfort crowned the hill's summit. In the 9th century, Alfred the Great erected a castle here. Then in 1144, Robert, Earl of Gloucester, built a wooden fortress to support Empress Maud in her struggle with King Stephen.

The king successfully stormed the castle in 1145, forcing Maud to flee, dressed in her nightgown.

In 1202 King John granted the site to the monks of St Mary at Citeaux. The monks, however, chose to build at Beaulieu, and Folly Hill was left in peace. 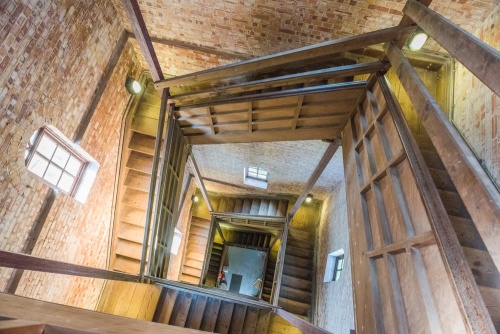 Looking down inside the Folly

In peace, at least, until Cromwell established a battery atop Folly Hill to bombard the town during the Civil War. Cromwell's men fired cannons at the church tower, trying to topple the steeple onto the Royalist's position.

Throughout all this time the summit of the hill was bare. It was only in the late 16th century that Sir Henry Unton of Wadley Manor tried to plant trees atop Folly Hill. Unfortunately, Unton chose a species of broad-leafed tree that was unsuited to the soil conditions and his plantation died. The failure of the plantation gave the hill a new name, Unton's Folly. It was not until the 1780s that the hilltop would gain its wonderful plantation of pine trees.

Henry Pye was Poet Laureate from 1790 until 1813. Never known for the quality of his poetry (he has been called 'the worst Poet Laureate in English history'), Pye was the son of Henry Pye of Faringdon House. His poems were so bad that he was ridiculed by literary critics. His birthday ode to King George III was so full of 'heavenly choirs' that a critic lampooned the piece by penning the now-famous rhyme, '... four and twenty blackbirds, baked in a pie'. The blackbirds are Pye's heavenly choirs and the pie is, well, Henry Pye.

For reasons known only to himself, Pye walked to the top of the hill above Faringdon every day, bearing a sapling of Scot's pine, which he carefully planted, creating the 4-acre plantation we see today.

This may have been a political statement; the Scot's pine was a traditional symbol of Jacobite support. We do know that Pye eulogised the hill in verse, in 'Faringdon Hill' (1774).

Pye's pines were almost destroyed in 1919 when the local council sold them to a timber merchant. Luckily, Lord Berners of Faringdon House heard about the sale and stepped in. He bought the hill and saved the trees. 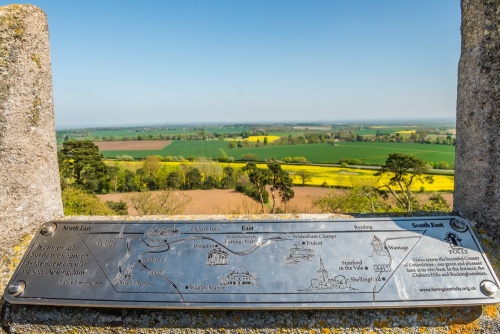 The view from the Tower's top

Over a decade later Berners was walking amid the trees on Folly Hill and chanced to remark to his companion Robert Heber-Percy that 'this hill needs a Tower'. His off-hand remark was overheard, causing rumours to fly that Berners intended to build a tower on the hilltop.

Local opposition was swift and vociferous. Lord Berners was highly amused by the incident and decided to go ahead with the tower that rumour supposed he was going to build anyway. He got planning permission based on the proviso that the tower could only be three feet taller than the treetops.

Lord Berners' aim was to create a true folly; a structure with no purpose, 'utterly useless'. Equally, to celebrate the coming-of-age of his companion and heir, Heber-Percy. Heber-Percy was not amused when he discovered that the folly was to be his birthday present. He had a few choice words for Lord Berners and added that he really would have liked a horse. 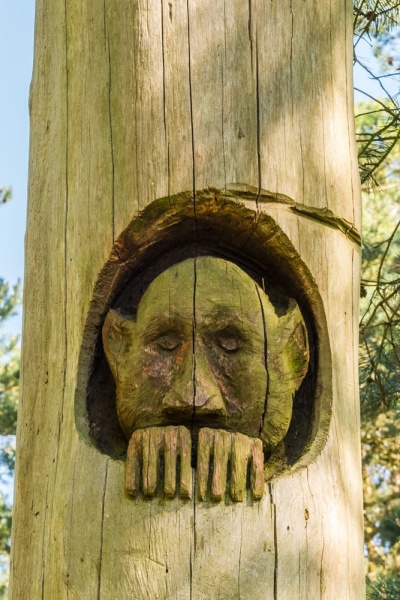 The woodland is full of absurdities like this sculpture

Lord Berners was a true eccentric and had a love of the absurd. He once wrote 'there is a legend that Our Lord said "Blessed are the frivolous, for theirs is the Kingdom of Heaven" and that it was suppressed by St Paul'.

Berners knew that his friend, the architect Lord Gerald Wellesley (later to become the Duke of Wellington) hated Gothic design, so he charged Wellesley with building the tower in Gothic style.

Wellesley was not amused, and tried to have his revenge. He began building the tower in severe classical style while Lord Berners was away. Berners returned to find the building almost finished. Only the top 10 feet remained. Berners put his foot down and insisted that the last 10 feet be in his preferred Gothic style. So that explains the very peculiar and striking combination of styles. Faringdon Folly looks for all the world like parts of two separate buildings stuck together.

Topping the tower is an extravagant Gothic turret that stands out above the surrounding trees like a beacon, visible for miles around. On a clear day, you can see across the Vale of White Horse to the chalk horse at Uffington, while to the north you can see as far as Little Rissington airfield in the Cotswolds. You can spot as many as 30 parish churches from the top of the tower.

The Tower opened on 5 November 1935, which was Heber-Percy's birthday and also, of course, Bonfire Night. A huge display of fireworks celebrated the Tower opening, and guests were invited to burn as many as 6 effigies of their enemies. Some guests complained that 6 was far too few. 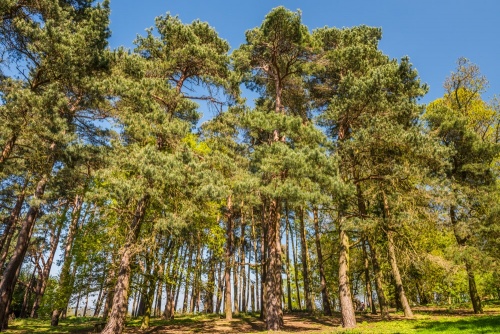 Scots pines planted by Henry Pye in the 1780s

Since the 1935 bonfire, Faringdon Folly has regularly acted as a beacon. From December through March each year a different style of beacon burns atop the Tower. In 2000 Faringdon Folly became a registered lighthouse; the only lighthouse in the world that cannot be seen from the sea.

A Haven for Spies

The Folly was generally open to visitors, and was used by the military in WWII as a vantage point - by both sides! A German spy was discovered using the Folly to follow events in the vale below, after which the tower was locked up. In 1985 Robert Heber-Percy had the Tower restored and gave it in trust to the residents of Faringdon.

Our family visited on a sunny Easter weekend and thoroughly enjoyed ourselves. Not only could we climb to the top of the Folly and get wonderful views over the surrounding countryside (binoculars are provided), but we had great fun exploring the woodland.

In keeping with Lord Berners' sense of the absurd, the woodland is full of oddities. See if you can spot humorous sculptures in the trees. Then see if you can find the plaque placed high on the side of the Folly that reads, 'Please do not feed the giraffes'.

The woodland surrounding the tower is open all year round to visitors. The Folly itself is open from spring through summer. Please check the official website for current days and times. 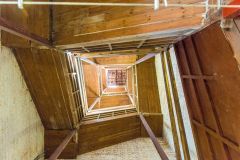 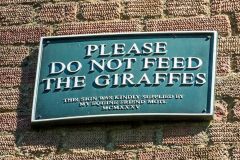 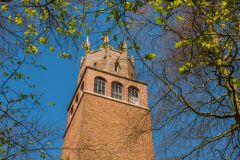 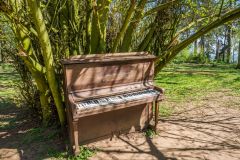 More self catering near Faringdon Folly >> 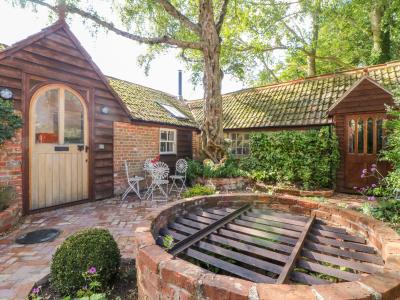 The is located on the outskirts of Faringdon, Oxfordshire and can sleep 4 guests in 2 bedrooms.
Sleeps 4 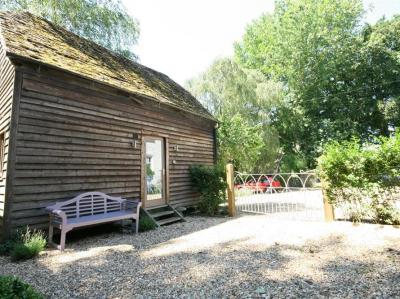