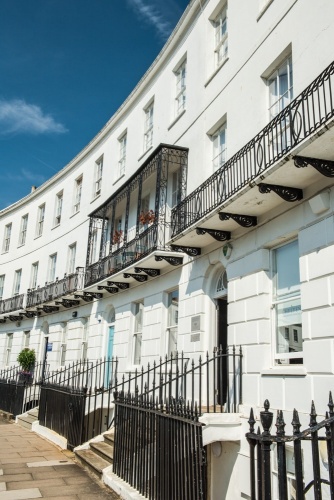 A Regency terrace in Cheltenham, Gloucestershire

The period of architecture we can loosely term Regency spans the first thirty years of the 19th century. In many respects, it is a natural continuation of the Georgian style which preceded it, with several important differences which we will get to in a moment.

Although it is, of course, impossible to generalize about popular styles, we'll do it anyway. There were two major streams of architectural styles popular in the Regency period. The first, which lived on far into the Victorian period, was one of medieval revival. This is often termed Victorian Gothic, or more accurately, Gothic Revival.

This style was based on medieval architecture, in particular the Gothic churches of the late 13th and early 14th century. Architects like James Watt emulated the Gothic tracery and other decorative elements of the Gothic period, but used more modern methods of construction and substituted cheaper materials. Thus, many Gothic Revival buildings used stucco in place of medieval stone, and braced fanciful Gothic curves with hidden iron struts.

Later in the Victorian period a purist school of design gained popularity, based on writings by AW Pugin, John Ruskin, and William Morris. These "philosophers of design" viewed the work of men like Watt with horror, and called for a more rigid adherence to medieval materials, structure, and craftsmanship.

The second, and more popular style of Regency architecture, was classical in nature. That is, it used the philosophy and traditional designs of Greek and Roman architecture. The typical Regency upper or middle-class house was built in brick and covered in stucco or painted plaster. Fluted Greek columns, painted and carefully moulded cornices and other decorative touches, were all reproduced in cheap stucco. The key words to describe the overall effect are "refined elegance".

The Regency period saw a great surge of interest in classical Greece, popularized by men like Lord Byron and his outspoken advocacy of Greek nationalism. A whole generation of aristocratic amateur archaeologists from Britain scoured the Greek world - and occasionally absconded with classical Greek remains. The resulting popularity of Greek style reached beyond architecture to include painting, furniture, interior decoration, and even dress design.

Regency Terraces
First a mundane definition: a terrace is a fanciful term for row housing, that is, a string of houses, each sharing a wall with the house beside it. The most characteristic Regency designs survive today in terrace housing.

Many of the more upper-class terraces, such as those designed by John Nash surrounding Regents Park in London, are entered through triumphal arches reminiscent of ancient Rome, These arches, generally in stucco, lead to grand rows of houses, with carefully balanced pediments fronted by massive pilaster columns. The best remaining terraces built in this grand style are in London, Cheltenham, and Brighton.

Characteristics
Windows are tall and thin, with very small glazing bars separating the panes of glass. Balconies are of extremely fine ironwork, made of such delicate curves as to seem almost too frail to support the structure. Proportions are kept simple, relying on clean, classical lines for effect rather than decorative touches.

Windows and doors, particularly those on the ground floors, are often round-headed. Curved bow windows are popular, and detached villas often featured garden windows extending right down to the ground.