No jaunt to England ever is complete, in our opinion, without a trek to at least one ancient castle. The good news for castle questors - particularly those who, like us, prefer to base themselves in London and venture out from there - is that there are a plethora of them, many of them in remarkable condition, that are within easy reach of the city. This is thanks to William the Conqueror and the real estate boom in castle construction that began with the Norman Conquest in 1066.

Castles were at the heart of William's strategy for the conquest of England. As he captured towns, villages and strategic river fords and road crossings, he secured his acquisitions by building castles.

The castles provided his troops with strong defensive structures to guard against any upstart Saxons bold enough to try to thwart William's ambitions. They also served as central points of supply and succour for the marauding bands of Norman soldiers that sallied out to terrorize and subdue the native population.

At first, most of the castles hastily constructed were of a simple 'motte and bailey' pattern with a wooden tower and palisade on top of a tall, man-made mound of earth surrounded by a deep ditch. Soon, however, William and the henchmen to whom he granted control of some of these sites began replacing these structures with formidable stone citadels. So mighty were these fortresses that many have survived nearly 1,000 years since their construction.

William's conquest of England can be traced through the castles he built as he marched inland after his September 1066 landing at Pevensey on England's southeast coast. There, he built a motte and bailey castle within the ruins of an old Roman fort, giving Pevensey bragging rights as the first Norman castle on English soil.

Eventually, stone structures replaced the first buildings and the defences were greatly expanded and strengthened in the 13th century, making Pevensey virtually impregnable. In fact, the castle never fell to assault, although the garrison was starved out several times in the Middle Ages. Today, the once-mighty castle is in ruins, although extensive vestiges of its walls and medieval buildings give a vivid picture of how formidable Pevensey once was.

William moved on to Hastings after securing Pevensey and quickly built another motte and bailey castle to await the arrival in the south of the army of the last Saxon king of England, Harold Godwinson. Very little of this castle exists today, just a few broken walls and crumbling stone structures atop a cliff that is accessible only by climbing 100 stairs or riding a steep railway. This is a trek meant only for the most intrepid tourist determined to track every step William took in his conquest of England.

After the Battle of Hastings in October 1066, William acted swiftly to solidify his victory. He went first to Dover, securing the site with a motte and bailey castle at this most strategic point just a few miles across the English Channel from continental Europe. The castle you see there today, however, is primarily a product of a building program by William's descendant Henry II.

It is a most impressive structure with massive walls and an awesome central tower, or keep, that houses one of the most beautiful and serene private chapels we've ever seen. Tudor fans get an extra bonus with an outing to this castle. Wax figure scenes and a continuously running audio commentary create the illusion of castle servants busily preparing for an impending visit by Henry VIII and his court.

From Dover, William began his drive toward London. Capturing and controlling London - the mercantile heart of England and a major power centre - was essential to the conquest of England and the surly Londoners were none too happy about the prospect of being ruled by a Norman duke.

Ultimately, the burghers bowed to the inevitable after the duke wreaked havoc all around them and promised the same for London if the city did not submit. However, even after the city surrendered, the threat of rebellion simmered beneath the surface.

William sought to quell these unreliable subjects by overwhelming them with very visible signs of his power. He blocked in the city with massive castles on three sides. Two of these fearsome fortresses, Baynard's Castle and Montfichet Castle are long gone. The third was the awesome White Tower, the real Acrown jewel@ of the Tower of London.

Set in the centre of the current Tower grounds, the White Tower is 90 feet high with walls that vary in thickness from 15 feet at the base to 11 feet at the top. Construction of the Tower was begun in 1078. The White Tower you see today is very much as it was when construction was completed in 1097, eight years after the Conqueror's death in Rouen.

William also surrounded London with a ring of nine castles, about 20 to 30 miles apart from each other and within a day's march of the city. At least remnants of all of these castles still exist.

Perhaps the most impressive of them is Windsor, the largest castle in England, covering more than 13 acres. It is still a primary residence of the British monarch. Again, although William was responsible for the first Norman castle at Windsor, the fortress you see today - at least in the Lower and Middle Wards of the complex - is much the product of Henry II and subsequent Plantagenet and Tudor monarchs. (The State Apartments were heavily redone by various Williams and Georges and, therefore, postdate the period of most interest to us.)

Windsor is an awesome citadel, bound to stir the heart of any fan of ancient castles. The star attraction is St. George's Chapel, a 14th-century creation of Edward III, founder of the chivalric society, the Order of the Garter, which is based at Windsor.

The chapel is a glorious piece of medieval work, but it also is a mausoleum for numerous British monarchs, including Edward IV and Henry VI, the champions of the White Rose of York and the Red Rose of Lancaster, respectively, during the Wars of the Roses. In addition, Henry VIII was interred here. He was buried alongside his third wife, Jane Seymour, mother of his only surviving male heir, the future Edward VI.

On the opposite side of London, in Essex, is Colchester Castle. Second to Windsor in impressiveness, the keep here was the largest in England (and in all of Europe for that matter), surpassing even the White Tower in size and strength. Covering a jaw-dropping 152 by 112 feet, the keep is a marvel of early Norman architecture.

Even more interesting is the fact that the castle was constructed entirely of recycled Roman materials, due to the lack of readily available building materials in Essex. Unfortunately, this awesome structure is today missing the top two of its original four stories, a result of an attempt in 1683 to tear down the entire building. The keep's solid construction defeated the destroyers and caused them to abandon the venture, leaving amateur historians at least half of the Conqueror's legacy to admire.

Another impressive survivor of the Conqueror's castle ring is Rochester. The central tower here is probably one of the best-preserved Norman keeps in all of England. Dating from the late 12th century, it is also one of the tallest keeps in the country, soaring 113 feet. It covers 70 square feet, with walls that are 11 to 13 feet thick.

Sadly, the building is just a shell, the roofs and floors of the three floors that once divided the keep are gone, although a central wall that split the building in half remains. Still, visitors are permitted to enter the keep and, if they have stamina and courage enough to tackle the steep, narrow, spiralling staircase that goes up to the battlements, they will gain a breathtaking view of the city and surrounding countryside.

A bonus for visitors to Rochester Castle is the cathedral across the street. The seat of one of the oldest bishoprics in England, construction of this cathedral was begun in 1080 by Bishop Gundulf, chief architect for William the Conqueror who also was responsible for the design of Rochester Castle and the magnificent White Tower in London.

Another Norman keep of one of the Conqueror’s castles can be found in Guildford. Although not as well preserved as that at Rochester, the keep is still impressive and remains of other medieval buildings constructed by succeeding monarchs can be found downhill from the motte topped by the keep.

For garden lovers, Guildford Castle is surrounded by glorious gardens, a modern interpretation of the collonaded gardens introduced to England B and to Guildford B by Eleanor of Provence, consort of Henry III. 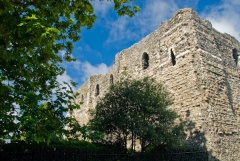 Remnants of five more castles of William's circle of nine can be found at Canterbury, Oxford, Wallingford, Hertford and Berkhamsted. In Canterbury, ruins of the stone fortress built here sometime between 1070 and 1094 can be found on Castle Street. All that is left of the mighty castle that once stood in Oxford is the original motte and St. George's Tower.

This was once the tower of the castle church. Most recently, it has been used as a prison. Currently, it is being renovated as a hotel. In Wallingford, the bulk of the castle remains are on private property, but a small section of the castle wall and one round tower have been incorporated into a pretty public garden that is open during daylight hours.

Hertford Castle has been deconstructed down to portions of the 12th-century castle walls and two towers, a gatehouse built by Edward IV and a few minor Tudor-era buildings. At Berkhamsted, you can poke around the extensive earthworks and trace major portions of the curtain wall. There also are remnants of towers dating from the 12th and 13th centuries.

Of course, castle construction in England did not stop with the ones described here. William ordered many more built as the Norman conquerors moved to suppress and control more and more areas of the country. In fact, there were at least 84 Norman castles in England by the time of the Conqueror's death in 1087. The castles at Pevensey, Hastings, Dover and London and the ring of nine were simply the initial stepping stones to the full conquest of England and the imposition of Norman rule.

Pevensey Castle
Located off the A259, between Eastbourne and Bexhill

White Tower
The Tower of London

Sarah Valente Kettler and Carole Trimble are The Amateur Historians. Visit us at www.amateurhistorian.com. Or, click on this link to purchase a copy of the Medieval and Tudor England: Day Trips South of London.