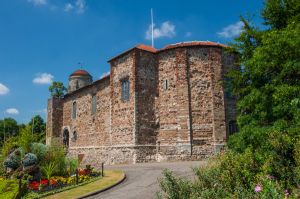 William the Conqueror chose Colchester to build his first - and largest - royal castle in stone. Construction began in 1076 on the ruins of a Roman temple to the Emperor Claudius, and remains of the temple can be seen today. The castle fell into disuse in the later medieval period, but was eventually restored and converted into a fine museum.

Sometime around 54AD a temple to the Emperor Claudius was built within the Roman town of Colchester (Camulodunum). The temple must have remained relatively intact after the departure of the Romans, for when William the Conqueror began work on his stone keep his masons used bricks from the temple to augment local stone. The temple foundations, with impressive vaults, can be seen below the current castle.

The Norman castle was designed by Gundulf, Bishop of Rochester and the man responsible for the White Tower at the Tower of London. Gundulf's design included a splayed plinth at the base - like a skirt - with two floors above. The interior space was divided in three by a pair of north-south walls.

The design included four large fireplaces; two in the east wall and two in the west. These are among the earliest stone fireplaces in England. At that time - and for several centuries after - it was more common to have a central fire in a hearth, rather than a fireplace and chimney in the wall.

Gundulf's design was executed by Eudo le Dapifer, who became the first castle steward when work was halted in 1080. We don't know why work stopped, for the castle was unfinished; it may have been the threat of a Danish invasion. In any event the castle was not actually completed until the early 12th century. It seems that the Normans planned three storeys, but in the end only two were built. 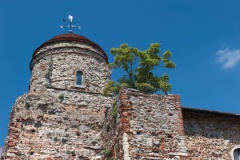 The castle's first major even on the stage of history occurred in 1199 when King John's powerful barons rebelled against the crown and took the castle. John recaptured the castle in 1215, shortly before his death, and it remained in crown hands for the next 4 centuries.

Colchester Castle was of no military value by the middle of the 14th century, and the castle dungeons were made into prison cells. The castle served as the county gaol until 1668 and as a prison until 1835. Conditions for prisoners, particularly in the medieval period, were notoriously poor, even by the standards of the day.

During the 17th century the castle was at the centre of important historical events. In 1645 it was the location for investigation into suspected witches instigated by the self-styled 'Witchfinder General', Matthew Hopkins. Hopkins was a local man, a resident of nearby Manningtree, and he used the castle for his rather unpleasant witch interrogations.

During the Civil War the castle was held by Royalist supporters under the leadership of Sir George Lisle and Sir Charles Lucas. In 1648 Parliamentary troops attacked the town, and after a bitter 12 week siege they forced the castle garrison to surrender.

The Royalist leaders were executed behind the castle, and a memorial in the form of an obelisk stands near the execution spot. It is rather poignant that children play and families stroll about the peaceful gardens, never glancing at the memorial or realising that they are enjoying themselves where 17th century soldiers were executed].

The castle was in dire condition after the end of the war, and in 1683 it was sold to John Weeley, who planned to tear it down and sell the stone as building material. Fortunately, his plan proved uneconomic, and destruction was stopped, but only after much of the upper storey had been pulled down.

Rescue was at hand, for in 1727 an antiquarian and lawyer named Charles Gray was given the castle as a wedding gift. Gray began the process of restoring the building, and created an area of parkland surrounding the ruined keep. This parkland later became Castle Garden. On Gray's death the castle site was sold to the Corporation of Colchester.

In 1860 the Corporation moved its collection of historic artefacts to the castle crypt, and opened it to the public. This was the castle's beginning of a new life as a museum of local history, a role it fulfils today.

On-going renovations ate gradually creating a state-of-the-art museum within the historic Norman fortress walls. The gardens surrounding the castle are open to the public, and you can easily trace the line of the original Roman town walls within the grounds. 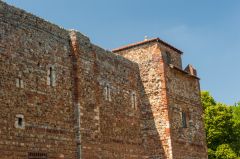 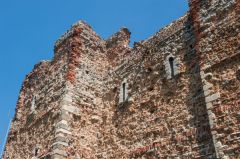 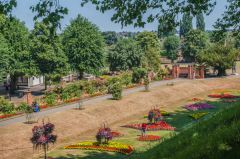