HERITAGE HIGHLIGHTS:   The garden is built around a 1780s historic house Surrounding the 18th-century manor of Bughtrig House is a delightful 1920s garden. The garden uses hedges to create small enclosures, each with its own unique character and planting scheme. In addition to the hedged enclosures, Bughtrig features specimen trees, roses, shrubs, fruit, annuals, lawns and herbaceous planting schemes.

Incorporated into the garden scheme are quirky and unusual pieces of modern sculpture. More sculpture is displayed in the greenhouses at the top of the garden. One surprising piece of sculpture is a mirrored outline of a young woman, placed to reflect the leaves of the surrounding shrubs.

This playful piece of art certainly adds an unexpected bit of flair to the garden. A more unsettling piece is entitled Clarice, depicting a woman and lamb, and was inspired by the film 'Silence of the Lambs'. Another sculpture is inspired by the oversized statue of Abraham Lincoln at the Lincoln Memorial in Washington, DC.

The specimen trees provide shelter to the tender plants, creating a surprisingly lush and colourful environment. 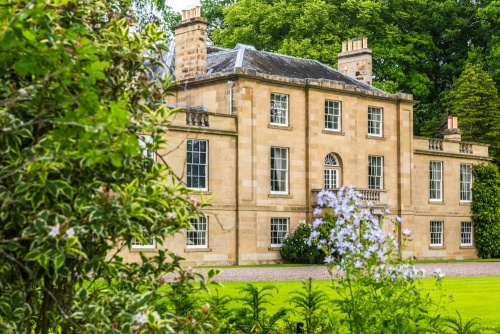 The garden covers two acres and is sheltered by a belt of mature trees. The most prominent garden feature is the Grass Walk, which stretches 246 feet and boasts lush borders of colourful lupins, meadowsweet, campanula and inula plants.

At the top of the garden are restored greenhouses and in front of the greenhouses are beds of old-fashioned roses as well as 'Pacific Giant' delphiniums. One delightful garden space is the Picnic Garden, a small space flanked by a picturesque old stone bothy. This walled space is bordered by Kniphofias ('red-hot poker' plants) to add colour.

Bughtrig House dates to 1785, with late Victorian remodelling. It is designed with a large central block flanked by two wings and decorated with classical details. A large addition was added in the late 19th century and a striking entrance porch to the front facade.

The 18th-century house may stand on the site of a medieval castle. The estate was owned by the Dickson family in the 16th century and records show that Robert Dickson was killed at the Battle of Flodden in 1513. The Dickson home was a traditional fortified tower house. Records suggest that it was destroyed by the English in 1544. 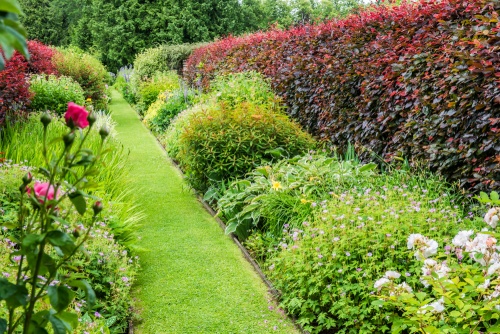 The property eventually passed to the May family and from them to the Ramsays. The garden incorporates an area planted in memory of Admiral Sir Bertram Ramsay, the grandfather of the present owner. Admiral Ramsay was the man behind the Dunkirk rescue operation and served as the naval commander for the D-Day landings in Normandy. A life-sized statue of Admiral Ramsay acts as a focal point for a delightful hedged garden area.

You can get excellent views of the house from the nearby gardens, though the house itself is open to visitors by appointment only. 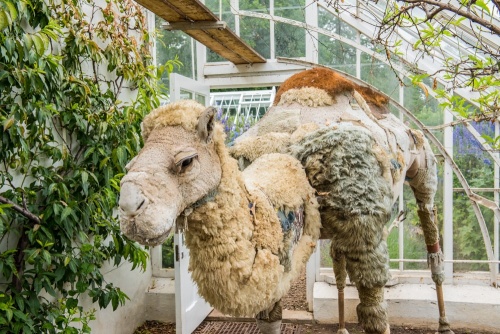 A modern sculpture in the restored greenhouses

Bughtrig Garden is easy to find. It is located on the B6461 immediately north-east of Leitholm village, roughly four miles north of Coldstream and six miles north-east of Kelso. There is a small parking area beside the garden. When we visited there didn't seem to be anyone about so we simply started walking through the garden, hoping we'd meet someone.

We eventually did find a gardener and when we told him we were Historic Houses Association members he simply wished us an enjoyable time visiting the garden and when on about his work.

Bughtrig Garden is open seasonally, usually from June through to the end of August, but it is always a good idea to check the official opening times. 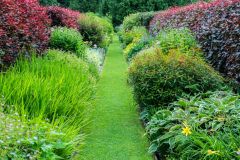 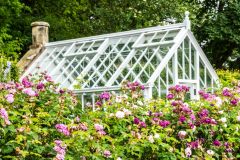 More self catering near Bughtrig Garden