HERITAGE HIGHLIGHTS:   Site of the National Covenant signing in 1638 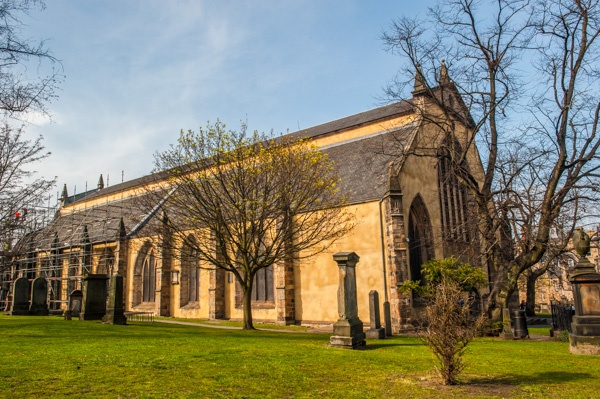 Greyfriars Kirk is one of the oldest buildings outside the core of Edinburgh's historic Old Town. The kirk stands on the site of a medieval Franciscan friary. The Franciscans were known as the Greyfriars for the colour of their robes, so the kirk gained the name Greyfriars.

The kirk was begun in 1602, but later divided into Old Greyfriars (1614) and New Greyfriar (1718). The two congregations each had their own sanctuary. It was not until 1929 that the congregations were united and the interior wall dividing the kirk was removed. 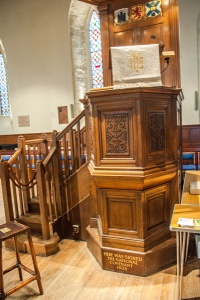 Site of the National Covenant
signing, 1638

Greyfriars was at the heart of Scotland's tumultuous Reformation. In 1638 the National Covenant was signed before the pulpit at Greyfriars, and a plaque now marks the spot. The Covenant launched a period of national upheaval, as dissenters tried to create a uniquely Scottish church.

The National Covenant was at the same time a religious document and a declaration of Scottish independence. In 1679 over 1200 Covenanters were held prisoner in a field beside the kirkyard before they could be brought to trial by the authorities.

A devastating fire in 1845 destroyed the roof and the interior furnishings, so that today much of what we see dates from the mid-Victorian period.

The association of the kirk with the National Covenant was not forgotten with the passage of time. In 1912 the Ulster Covenant was signed at Greyfriars, with over 1000 people adding their signatures to the document, opposing home rule for Ireland.

On the north wall of the kirk is a memorial to Robert Adam, the foremost architect of country houses in Britain during the latter half of the 18th century. Adam was responsible for some of the most elegant and sumptuous Palladian designs of stately homes like Harewood House, Kenwood, Bowood House, Croome Court, and Nostell Priory.

The graveyard surrounding the church was founded in 1561 and is now maintained by a separate trust, and known for the large number of historic monuments, including many to famous people - and one very famous dog.

Perhaps the most famous grave site is the memorial to Sir Walter Scott and his family. Scott worshipped in the kirk as a young man, and a small memorial is set on the kirk wall in his honour. Another famous name buried in the Kirkyard is Lord Monboddo (1714-1799) a judge, linguist, and scholar who helped create the idea of natural selection popularised by Charles Darwin. 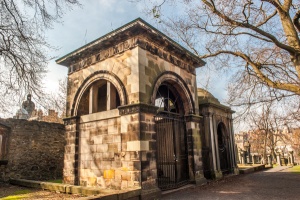 The kirkyard is the haunt - literally - of a ghostly spectre, the spirit of 'Bloody' Sir George MacKenzie. MacKenzie was known for his harsh treatment of Covenanters imprisoned in 1679 in the field beside Greyfriars. Some of the Covenanters were executed, but many more died of mistreatment under MacKenzie's rule.

His monument is one of the finest in the kirkyard, but his ghost is said to cause bruising and minor cuts to any visitor who comes into contact with it. I visited the kirkyard on a sunny afternoon in April, and did not meet any unpleasant spectres.

The name Greyfriars is practically synonymous with Greyfriars Bobby, a Skye terrier who kept watch by his dead master's grave for 14 long years. Several versions of the events have told, so it is hard to separate fact from fiction, but the best-known version says that Bobby was owned by a night watchman named John Gray, who worked for the City Police. When Gray died in 1858 he was buried in Greyfriars Kirkyard. 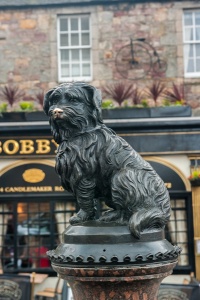 Greyfriar's Bobby statue
outside the Kirkyard

Bobby refused to be parted from his master and spent every day for the next 14 years sitting on his master's grave. New laws were brought in the dogs without a license should be destroyed, but Sir William Chambers, Lord Provost of Edinburgh, paid for Bobby's license out of his own pocket, and gave the loyal dog a collar. The collar is now in the Museum of Edinburgh on the Royal Mile.

As for Bobby, he died in 1872 and was buried in unconsecrated ground just inside the kirkyard, near the east end of the church.

In 1873 Lady Burdett-Coutts paid sculptor William Brodie to create a drinking fountain topped by a statue of Bobby at the junction of George IV Bridge and Candlemaker Row, just outside the east end of the kirkyard. The fountain had two bowls, a high one for humans and a lower one for dogs. The fountain was restored in 1985 and is a popular destination for tourists, many of whom seem intent on rubbing the statue's nose in the belief it will bring good luck.

Greyfriars Kirk is open to visitors daylight hours, and is well worth exploring. It is easily reached on foot from the Royal Mile and Edinburgh Castle. You could spend an hour exploring the kirkyard alone, with its fascinating variety of historic monuments and family memorials. 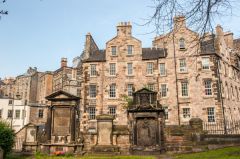 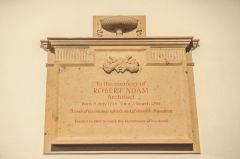