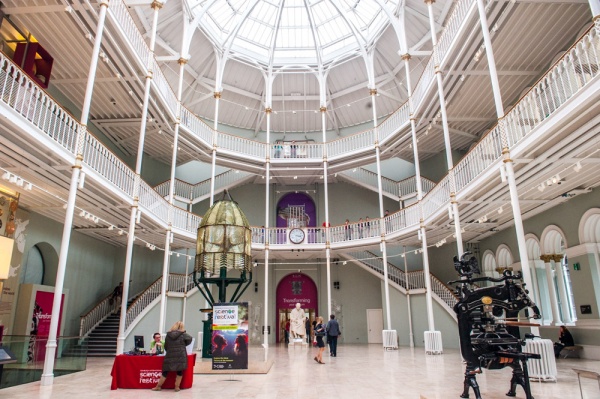 The Grand Gallery in the National Museum of Scotland

The National Museum of Scotland is one of the country's most popular visitor attractions, and holds Scotland's national collections of science, technology, natural history, world and Scottish culture, history, and antiquities.

The museum was formed by merging the former Museum of Scotland and the neighbouring Royal Museum to form a single museum in 2006. The museum stands on Chambers Street, within easy walking distance of the major tourist attractions on Edinburgh's Royal Mile.

The museum has a bit of a split personality; the Museum of Scotland is housed in a modern building, opened in 1998, and linked to the former Royal Museum building, a stunning example of Victorian Romanesque Revival architecture opened in 1866.

The museum is free to enter is open daily throughout the year except for Christmas Day. 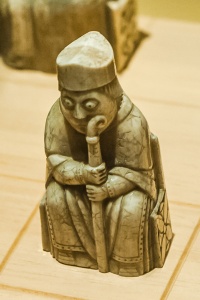 One of the Lewis Chessmen

The museum is loosely divided into several major areas, devoted to Art and Design, the Natural World, Scottish History and Archaeology, World Cultures, and Science and Technology.

The museum entrance brings you into the Grand Gallery, a marvellous Victorian hall, that the museum rightly calls 'one of Scotland's most beautiful spaces.' The Grand Gallery is a huge atrium, with light flooding into a four-storey space called The Window on the World. One of the most popular exhibits in this area is the Millennium Clock, which strikes the hour with a cascade of music, lights, and dancing figures.

Beyond the Grand Gallery is Discoveries, with objects from around the globe linked to famous Scots. See a specimen of penicillin annotated by Alexander Fleming, whose discovery changed the world. Here you will find objects as diverse as a painted Egyptian coffin and the earliest colour television in the world. 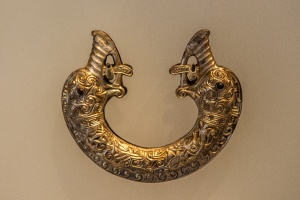 My favourite part is the museum is the Scottish History and Archeology collection. The Scottish galleries cover the rich history of Scotland from the prehistoric period through the space age. Some of the historic objects in this part of the museum are national icons.

In the category of national icons must surely be the Lewis Chessmen, the most famous archaeological find in Scottish history. The Chessmen were discovered at Uig, on the Isle of Lewis, in 1831. They were crafted in the late 12th century, probably in Trondheim, Norway, at a time when the western Isles were under Norse control. The Chessmen are carved from walrus ivory and stand 60-100mm high.

In the same area of early Scottish finds are carved Pictish stones, including the Hilton of Cadbol Stone, carved with fascinating Pictish symbols. It was great fun seeing the stone, as I had visited the site where it was found in Dark Isle. One of the most unusual objects in the museum is the Ballachulish Figure, a bizarre semi-human figure carved from alder wood with quartzite pebbles for eyes. The figure was probably carved around 600 BC. 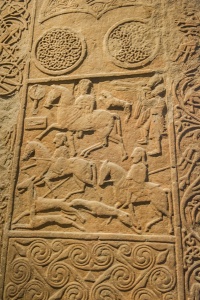 The Kingdom of the Scots exhibit spans the period from 1100-1707. Here you will find some of the most precious objects in Scottish history, including the ornately decorated Monymusk Reliquary, made about AD 700 from wood, silver, and bronze. Then there is the Queen Mary Harp, made around 1450 in the West Highlands.

More modern galleries cover Scottish life in the 20th century, through the two World Wars, objects from daily life, politics, and industry. The objects are incredibly diverse, from a Hillman Imp automobile to suffragette broaches.

You could spend days exploring the National Museum of Scotland. I knew we didn't have time to see everything in a couple of hours, so I concentrated on the Scottish history collections. Even then, I could have spent many, many more hours just exploring these galleries. There is simply so much to see! The exhibits are beautifully arranged, and there is plenty of space, so you don't feel cramped even though the museum is full of fellow visitors. I highly recommend setting aside plenty of time to explore. 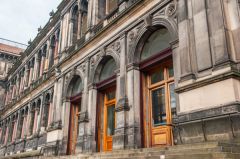 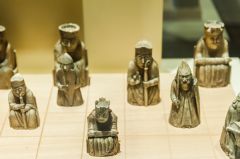 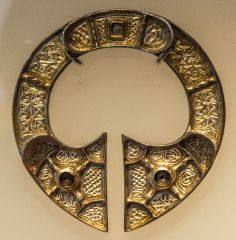 More self catering near National Museum of Scotland

More bed and breakfasts near National Museum of Scotland