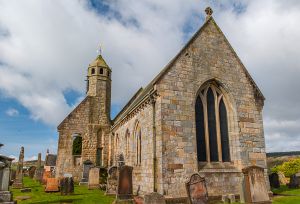 St Brides is a 14th-century church with 16th-century clock tower housing the oldest working clock in Scotland. The mausoleum contains the grave of Sir James Douglas, known as the "Black Douglas" and also that of the 5th Earl of Angus, known as "Bell the Cat".
History
The first church at Douglas was built in the 12th century, but all that remains of this Norman building are fragments of carved capitals. The current building dates to the late 14th century, and even that is a partial ruin.

Archibald the Grim, 3rd Earl of Douglas, rebuilt the 12th-century church as a burial place for his father, who fought with Robert Bruce in the Scottish Wars of Independence. The church became a mausoleum for the Black Douglas earls and their families, though Archibald himself was not buried here but at Bothwell Collegiate Church, near his home of Bothwell Castle.

Good Sir James Douglas
All that remains of the Douglas mausoleum is the ruinous chancel. Within the chancel are 3 canopied tombs. The earliest is that of Sir James Douglas, Archibald's father. 'Good Sir James' who died in 1330 while carrying Bruce's heart on Crusade in Spain. The story goes that Bruce had always wanted to go on Crusade, so after he died his friend Douglas took Bruce's heart n a small silver casket and went to fight against the Moors in Spain. Surrounded by his enemies, he hurled the casket into their midst and charged after it, fighting to the death.

Douglas is represented by an effigy in armour, his sword drawn, his feet resting on a beast. The tomb almost certainly predates the chancel and must have been salvaged when the older church was rebuilt. Look for the heart casket, a reminder of Sir James' mission on behalf of his friend.

Another elaborate tomb is that of Archibald, 5th Earl Douglas (d. 1439). Rather than armour, his effigy is shown in state robes.

The third canopied tomb is that of James, the 7th Earl (d. 1443) and his wife Beatrice (c. 1463). The Earl is once again shown in armour, and both are depicted in an attitude of prayer. The base of the tomb has a frieze showing the couple's 10 children in mourning.

Also in the chancel is an effigy of a woman in 13th-century costume, possibly representing Lady Marjory Abernethy (d.1288). The Douglasses were one of the most powerful families in the kingdom, but like many powerful families, they made enemies. Unfortunately, their major adversaries were the Stewarts, and since the Stewart's took the throne, the days of Douglas influence were numbered. Over 3 years from 1442-1455 James II seized Douglas estates and wiped out the family's influence - and many of the most prominent family members as well.

The Oldest Clock in Scotland
The church fell into disuse, though in the late 16th century a small tower was built at the east end of the south aisle. The tower was probably built with one purpose; to house a clock, thought to have been a gift of Mary, Queen of Scots. The clock face bears the dates 1565, and it is thought to be the oldest working clock in Scotland. Don't try setting your watch by the clock's chimes, though. It chimes at 3 minutes before the hour, in deference to the Douglas family motto, Jamais Arriere, or 'never behind'.

The chancel continued to be used for services until 1781 when a new St Bride's church was built. The 'old' St Brides was in decay until the 12th Earl of Home restored it in 1880. In rebuilding the church Lord Home was echoing the actions of Archibald Douglas over 500 years earlier, for he wanted a suitable place to erect a memorial to his mother, Lady Lucy Montagu Douglas. An alabaster memorial to Lady Doulas (d. 1877) stands in the centre of the restored chancel.

Though you can get a good view of the church from the outside, you'll need to get a key from the local keyholder to see inside. There is a sign with details of where to find the keyholder, and the current phone number is on the official Historic Scotland website listing for the property. 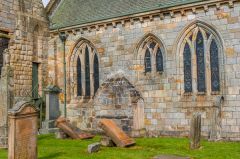 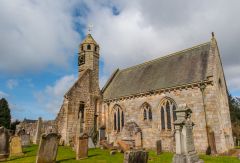 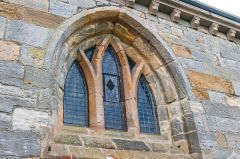 Nearby accommodation is calculated 'as the crow flies' from Douglas, St Brides Church. 'Nearest' may involve a long drive up and down glens or, if you are near the coast, may include a ferry ride! Please check the property map to make sure the location is right for you.