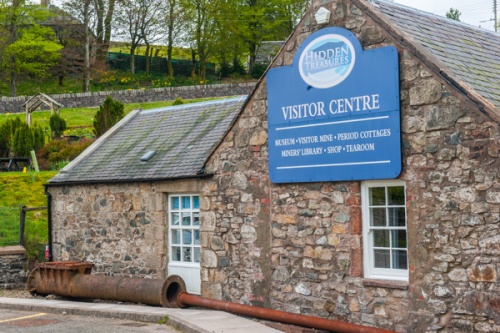 The historic mining centre of Wanlockhead features not one heritage site but several, joined together under the umbrella of a local charity called Hidden Treasures, with a museum of lead mining in the Wanlockhead area, tours of a lead mine, a restored miners cottages, and a subscription library dating to the late 17th century.

The focal point of 'Hidden Treasures' is the visitor centre, cafe, shop, and museum in the centre of Wanlockhead village. The museum is housed in the old village Smiddy, or blacksmith's shop.

The most famous visitor to avail himself of the Wanlockhead blacksmith's services was poet Robert Burns. Burns was travelling through the area as part of his duties as an exciseman. When his horse threw a shoe, Burns had it shod here, and in lieu of cash, he wrote a poem to the blacksmith.

The museum is a fascinating mix of historical tableaux, mining tools, old photographs, and examples of both ore and precious gems mined from the ear around Wanlockhead. Discover how lead ore is prised from the earth at the mine face, and how it was transported to the surface before being transformed into the useful objects.

You can see how the miners worked, and watch a fully functioning model of the Wanlockhead Beam Engine at work, raising water from the lowest levels of the mine. 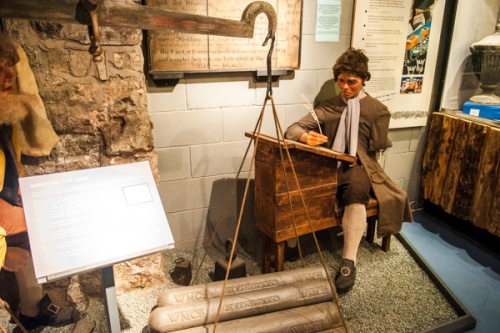 A historical tableau inside the museum

The Lowther Hills area is responsible for 1% of the total amount of all known minerals in the world.

This wonderfully entertaining tour, which must be booked at the museum, takes visitors down a narrow shaft of the Lochnell Mine, the only former lead mine open to the public in Scotland. The mine entrance is a short walk from the museum, amid an amazing landscape of old mine pits, disused shafts, spoil heaps, and mining paraphernalia.

The Lochnell Mine operated for over 150 years. It was begun by the Quaker Company of London in 1710. The lease was transferred to Messrs Crawford & Company in 1756, and they operated the mine until 1842. It finally closed for good in 1861, by which time the workings had reached 500 feet below the initial drift, or horizontal tunnel.

The ore did not run out, but the hydraulic pumping engine simply couldn't cope with the increasing depth and the quantity of water accumulating at the bottom of the mine.

The tour follows Williamson's Drift straight into the hillside. It's a damp experience, and despite wearing a hard hat the drips of water from above made it feel like I was in a gentle rain shower at times! As you go deeper into the drift you see the very first piece of galena, or lead ore, discovered here. It was left in the vein by the miners, hoping it would bring them good luck.

One of the most fascinating things about the mine tour was learning how the miners worked. Boys as young as 12 years old worked in the mine, hauling heavy loads of ore to the outside world. Younger boys worked in the streams outside, washing the ore in all weather for a wage of 2 pennies per day.

The miners had it worse, for they might not see the sun at all; entering the mine in darkness and not leaving it again until night had fallen. They had to supply their own tools and candles, which offered the only light to work by. It was a hard life, and the life expectancy of a miner was very short.

I highly recommend the tours; it was a real eye-opener for our family, and to be honest, made us very grateful that we hadn't been a mining family 200 years ago! 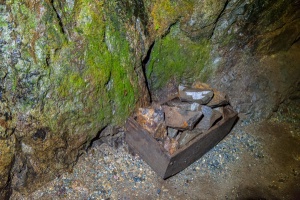 An ore sledge, ready to be
hauled out by young boys 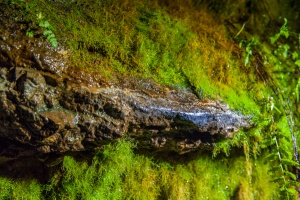 The first piece of galena
found in the mine 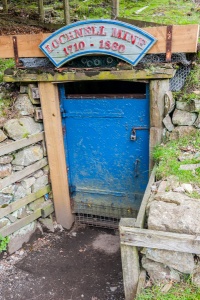 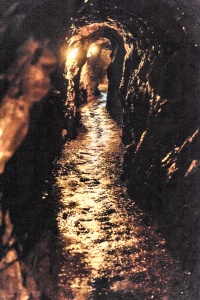 Going deeper into the mine 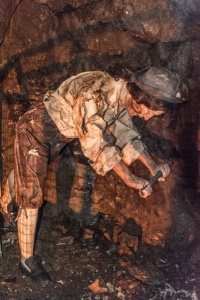 A 'miner' at work

A few steps from the 18th century Beam Engine (Historic Scotland) is a restored miner's dwelling known as Straitsteps Cottages. These have been carefully restored to illustrate how miners and their families lived at various time periods during the history of mining in Wanlockhead.

The first cottage shows a typical dwelling from around 1750, with a thatched roof and rushes on an earthen floor. The only source of heat was a peat fire, and a simple hole in the roof let the smoke out. Windows were unglazed, as glass was too expensive, so wooden shutters kept the elements at bay.

The second cottage shows life a century later, around 1850. By this time miners were allowed to build cottages anywhere they liked, and when the Duke of Buccleuch took over the mining operation at Wanlockhead housing conditions improved beyond all recognition. Houses now had two rooms and an outside toilet, fully glazed windows and cooking ranges fueled by coal.

The final cottage shows what life was like around 1910, when mining families had enough money for small luxury items, more furniture, and even books to read. The contrast between the first cottage and the last is startling, and a reminder of how difficult life was for those early miners in the area. 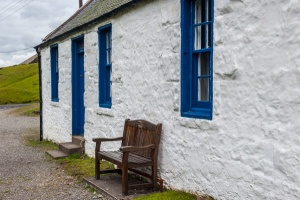 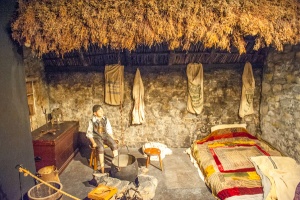 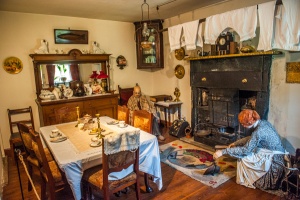 Immediately below the Straitsteps Cottages is the Beam Engine, which is not a part of the Museum operation at all, but is in the care of Historic Scotland. You'll have to investigate the engine on your own, for it is not included in the tour, but it is worth having a look at the machinery and the explanation of how this ingenious piece of 18th-century engineering worked to pump water from the mines using buckets in an attempt to create a perpetual motion machine.

Just a short distance up the hill from the main museum building is the Miners Library, the second oldest subscription library in Scotland (and in Europe), founded in 1756 by the miners themselves for their 'mutual improvement', though the mining companies contributed as well, hoping that focussing on learning would create a less rough-and-tumble atmosphere in the village.

Visiting the Library is a fascinating glimpse into social history. Memberships were highly prized, and each new member was subject to a rigorous screening process before being allowed to join. Membership was also open to women, at a time when equal education opportunities for females was not a widely accepted concept. That said, in 1784 there was only one female member compared to 32 males!

The real treat is looking at the range of books on the shelves to get a sense of what the miners thought was important to read. There is a fair bit of religion and 'improving' material, but also popular novels, travelogues, even a copy of the Koran. It's a fascinating mix!

The library began in the school building, but as it became more popular larger premises were needed. It moved to a cottage granted by the mine overseers in 1787, and to a purpose-built cottage the following year.

By 1851 the library had over 2000 volumes on its shelves, so a new building was opened. This is the whitewashed structure you can see today, but if you look across the valley you can see the original cottage home of the library, now a private residence. 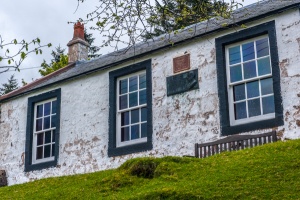 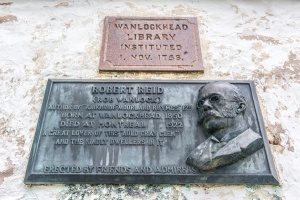 Commemorative plaque
on the library exterior