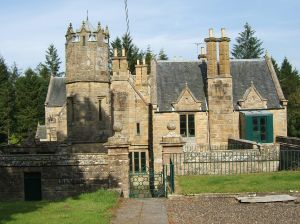 Corehouse
Corehouse is a large country house near Lanark, begun in 1824 by the Cranstoun family, head of Clan Cranstoun, on a site by the River Clyde. The architect was Sir Edward Blore, who created a beautiful family home in the new Tudor Revival style that was just then gaining popularity in Scotland.

There is some question over exactly when the house was built. Corehouse is mentioned by Dorothy Wordsworth, sister of the poet William Wordsworth, in her diaries for 1803. That would suggest that there was a much earlier house on the site than the one we see today.

Corehouse stands two storeys high, plus an attic, with an asymmetrical frontage and an octagonal tower to one side. The entrance is off-centred and decorated in Jacobean style with a scrollwork cartouche above the entrance. The interior is an almost unaltered example of Tudor Revival style, with elaborate cornices and a beautifully carved oak staircase.

Edward Blore was one of the most influential country house architects of the 19th century. Corehouse was his attempt to recreate an authentic Elizabethan manor house in Cotswold style. Blore would go on to use the same style in many of his most successful houses around Britain. He became so highly regarded that he was called in to complete Buckingham Palace after the original architect, John Nash, had been dismissed.

He was introduced to George Cranstoun, later Lord Corehouse, by author Sir Walter Scott, who had used some of Blore's designs for his own house at Abbotsford.

Overlooking Corra Linn Falls are the ruins of Corra Castle, a late medieval fortified farmhouse built by the Bannatyne family. Corehouse was set in a designed landscape, like a painting on a vast scale. The landscape at Corehouse was a popular destination for 19th-century tourists from Glasgow who combined a visit to Corehouse with a visit to the Falls of Clyde.

The house can be reached by way of a riverside walk from New Lanark World Heritage site, across the Falls of Clyde Nature Reserve. Indeed, three of the four falls that make up the famous Falls of Clyde are within the Corehouse Estate.

Nearby accommodation is calculated 'as the crow flies' from Corehouse. 'Nearest' may involve a long drive up and down glens or, if you are near the coast, may include a ferry ride! Please check the property map to make sure the location is right for you.

More self catering near Corehouse >>

More bed and breakfasts near Corehouse >>