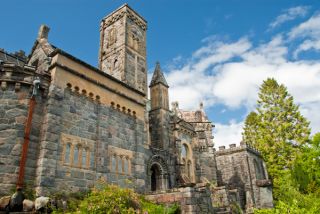 St Conan's Kirk is an extraordinary early 20th-century church on the shore of Loch Awe, built by Walter Douglas Campbell, brother of the 1st Lord Blythswood, and incorporating fragments of carving from Iona.
In the 1870s a new railway line was built along the north shore of Loch Awe, linking Dalmally and Taynuilt. Douglas Campbell took advantage of easy access to the loch to purchase the island of Innischonan and build a mansion for himself, his mother, and his sister Helen. Tradition suggests that Campbell's mother found the carriage ride to Dalmally church too taxing, so Campbell decided to build a new church on the shore.

Campbell began building a small cruciform church here in 1881, situated where the nave of the current church stands. This was complete by 1886. But it was not long before Campbell decided to create something far more elaborate and grandiose. In 1907 he began a much larger, more ornate building, and entirely rebuilt the earlier structure. Campbell died in 1914 and the work was carried on by his sister Helen. Then she died in 1927, so it was not until 1930 that the building was finally consecrated. 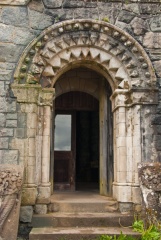 Romanesque entrance doorway
Why did it take so long to build?
For a start, no workmen were brought in from outside; all work was performed locally. And no stone for the church was quarried; rather, boulders were found on the slopes of the hill above the loch, rolled down the hill to the building site, and shaped on the spot. And Campbell served as his own architect, designing a completely unique building that defies ordinary styles of description. The Kirk is heavy on Romanesque style, but uses both early and late examples of both, and mixes in other completely unrelated styles to create something completely unique and unusual. How unique? Well, rumour persists that Campbell intentionally included examples of every type of church architecture ever found in Scotland. That includes a group of standing stones set up at the church gates.

It was well worth the wait for the Kirk to be complete, for St Conan's is one of the most uplifting and extraordinary early 20th century buildings in the west of Scotland. It is hard to characterise the style; it is really a bit of everything from Norman to Victorian. The interior is filled with light and gloom, with open spaces and deep shadows. Pieces of carving from Iona Abbey are built into the north wall of the south aisle. 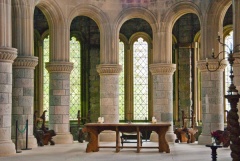 The apse and altar
The south wall of the Bruce Chapel contains a window brought from St Mary's church in South Leith. Also in the Bruce Chapel is a bell made for the Skerryvore Lighthouse in 1843. There is a wide ambulatory behind the high altar, with clear window glass giving wonderful views out over the loch.

The Bruce Chapel
One of the most intriguing features of the church is the Bruce Chapel, dominated by a larger-than-life effigy of King Robert Bruce, with the hands and face made of alabaster and the remainder carved from wood. The effigy lies atop an altar tomb, and set into the tomb base is an ossuary holding one of Bruce's bones, taken from his skeleton at Dunfermline Abbey. The location of the king's remains here at Lochawe is no accident, for it was in the Pass of Brander, high above the loch, that Bruce won one of his most important victories during the Wars of Independence. The effigy of Walter Campbell himself is in St Conval's CHapel, and both he and his sister are buried in a family vault beneath the chapel.

The heavy timbers used to build the cloister are thought to have been salvaged from a pair of decommissioned navy destroyers, the Caledonia and the Duke of Wellington.

Visiting
It is hard to sum up St Conan's Kirk; it is unlike any other church I've visited. In fact, I wasn't even planning to visit; I was driving along the A85 on my way to Kilchurn Castle when I passed the church by the side of the road and saw the 'open' sign outside. Intrigued by the oddly medieval building that obviously wasn't medieval, I made a snap decision and pulled over, grabbed my camera, and headed for the invitingly open door. I'm sure glad I made that decision, for St Conan's was incredibly appealing.

It is very hard to describe the church; the apse and ambulatory remind me of St John's Chapel in the Tower of London, one of the most evocative Romanesque sites in Britain. Yet other parts of the church just don't fit any category at all. I can't say more than to recommend a visit. St Conan's isn't anywhere near as old as most of the historic sites we list on Britain Express, but it is definitely a 'don't miss' attraction if you're in the Loch Awe area. 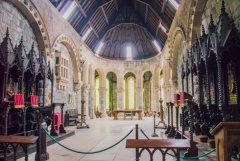 The chancel and altar beyond 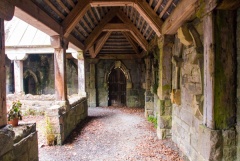 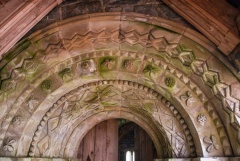 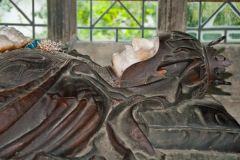 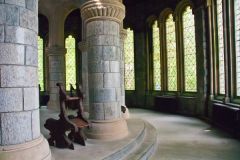 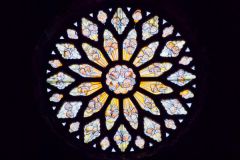 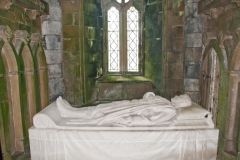 Nearby accommodation is calculated 'as the crow flies' from St Conan's Kirk. 'Nearest' may involve a long drive up and down glens or, if you are near the coast, may include a ferry ride! Please check the property map to make sure the location is right for you.