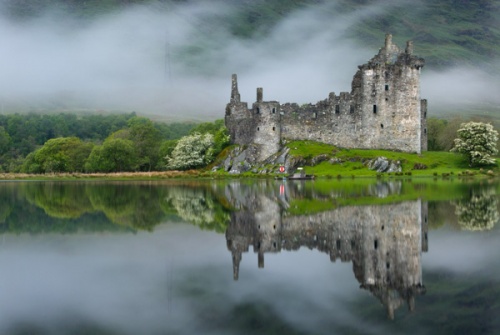 There are few more scenic castles in Scotland than Kilchurn, built on a small, rocky isthmus joined to the shore at the tip of Loch Awe. Kilchurn was one of numerous castles erected by the powerful Campbell clan, who exercised control of much of western Scotland in the late medieval period.

The castle's location at the end of the Pass of Brander allowed the Campbells to control access from the east to the lands of Lorn, and joined their lands in Lorn with their estates in Perthshire. The castle was built upon an island, connected to the shore by a hidden causeway under the surface of the water.

Over time the water has fallen and the passage to Kilchurn is entirely above water - there's no need to guess where the watery causeway lies!

The first 'castle' on the site was built in 1440 and it wasn't a castle at all, but a five-storey tower house, protected by a perimeter wall. The builder was Sir Colin Campbell of Glenorchy, popularly known as the Black Knight of Rhodes for his exploits in the Crusades. But how easy it is to ascribe most building projects to the male head of a household!

In this case, and probably in many others, that attribution is misplaced. Tradition says that the building project at Kilchurn was actually overseen by Margaret Campbell, Sir Colin's wife, during her husband's long absence fighting abroad.

The Campbells did not live at Kilchurn, at least not at first. They installed the MacGregors of Glenstrae as keepers. This arrangement lasted until the 17th century when the clans fell out, and a bloody feud ensued.

There was more violence in 1654 when a Royalist force under General Middleton besieged Kilchurn for two days before they were driven off by the arrival of Cromwellian troops sent by General Monck. The respite was brief, however, for in 1685 the Earl of Argyll rebelled against James VII and sent his men to besiege Kilchurn once more. 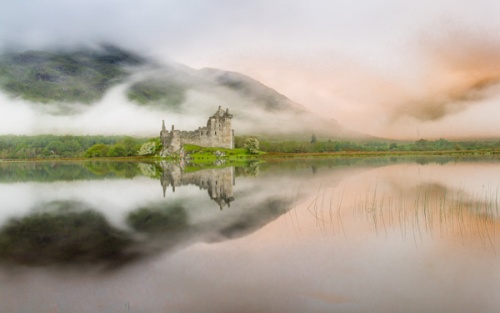 Just 5 years later Sir John Campell, owner of Kilchurn, saw a good business opportunity; the castle's strategic position made it perfect for government troops to control the turbulent west Highlands. He added three large corner towers to the walls, and had a large barracks block built, ready to house 200 soldiers.

His plan was to sell Kilchurn to the government as a ready-made military fort. It was a good plan, given the undoubted strategic importance of Kilchurn, but his plans were foiled, however, when the government decided to expand their military presence in Fort William instead. That decision made sense, for Fort William was easily supplied by sea.

Crown soldiers did end up at Kilchurn anyway, for it was garrisoned by the government during both the first and second Jacobite Rebellions (1715 and 1745).

In 1740 the Campbells deserted Kilchurn for their castle at Balloch (later known as Taymouth Castle). Kilchurn was left to moulder away, a process that was hastened when it was struck by lightning in 1769.

It was never rebuilt after the lightning strike and quickly began to decay. The roof fell down the following year and the castle ruins became a source of free building material for local landowners. In 1841 drainage work on Loch Awe lowered the water level and as a result, Kilchurn's island home became an isthmus, as we see it today.

There are really two Kilchurns; the tower house and the barracks. The tower house is an empty shell, though it still stands to its full height. The bottom level is a vaulted storage cellar and a prison, and there is a hall on the first floor. Staircases to the upper floors are set within the angles of the walls. Another eye-catching feature is the circular angle towers on the north and south walls of the 17th-century barracks. 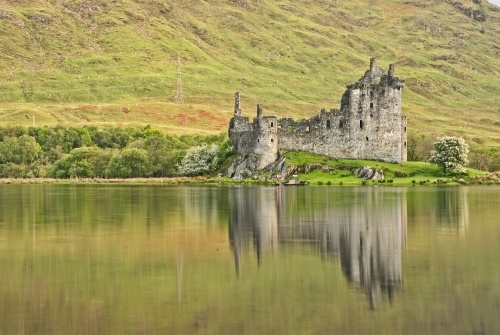 The castle reflected in the loch

If you are fortunate enough to watch the day break at Kilchurn you will realise that it is indeed one of the most picturesque castles in Scotland. The location at the head of Loch Awe, surrounded by hills, is simply stunning. The best views that I have seen of the castle are from the A819 running south along the shore towards Cladich.

The main access to Kilchurn is a minor road off the A85 between Dalmally and Lochawe village. If you come by way of Lochawe (the village, not the Loch!) do take the time to visit the extraordinary church of St Conan; it is truly an exceptional building.

Nearby accommodation is calculated 'as the crow flies' from Kilchurn Castle. 'Nearest' may involve a long drive up and down glens or, if you are near the coast, may include a ferry ride! Please check the property map to make sure the location is right for you.

More self catering near Kilchurn Castle