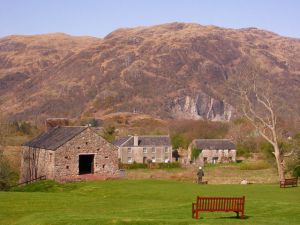 Bonawe Iron Furnace
A charcoal-fired ironworks founded in 1753 in a spectacular setting at the head of Loch Etive. Bonawe used charcoal from the nearby woodland to produce pig iron, and the original furnace works are remarkably complete.
History
Making iron with the use of charcoal was a process that required a plentiful supply of wood. The woodland of Argyll attracted the eye of Richard Ford & Co. from Furness, in Cumbria. Attracted by the opportunity to draw on the forests of Argyll to make charcoal, the Cumbrian company opened a new iron furnace at Bonawe.

Though the proximity to the Argyll woodlands meant greater efficiency, the iron ore itself was imported from Cumbria, so the process was not as efficient as it might have been.

Despite those challenges, the furnace was a success, and produced up to 700 tons of pig iron each year, employing up to 600 people in the process. Most of these employees worked in the woodlands, using wood to create charcoal, which was then sent to the furnace. These 'coalers' were Gaelic-speaking locals and were employed only in the summer months. Only 20 men worked at the furnace itself, and their work schedule was the opposite of the coalers; they worked through the winter making iron and spent the summer repairing equipment.

The furnace primarily made pig iron for export, but during the Napoleonic Wars, it produced cannonballs for the British military. This connection to the military was emphasised in 1805 when the miners of Bonawe were the first in Britain to erect a monument to Lord Nelson after his death at Trafalgar. The monument still stands at Taynuilt, but its plaque can be seen at Bonawe.

The Bonawe furnaces remained in operation until 1876, and modern visitors can see the most complete example of a charcoal furnace in the country. What is fascinating at Bonawe is that you can trace the entire process of making iron, including the lade, or water channel that brought water from the River Awe to turn the waterwheel that powered the bellows.

See the pair of huge charcoal sheds where the fuel was kept dry and the charging house where raw materials were weighed. Then there is the furnace itself, along with the blowing house and casting house, where the ore was transformed into pig iron. See the houses where workers lived and the pier where the finished iron was loaded onto ships for transport. Beside the ironworks is Bonawe House, built for the site manager but now a private residence.

Bonawe Furnace is a significant piece of British industrial heritage, a rare surviving example of an early industrial site, in a wonderfully scenic location.

Nearby accommodation is calculated 'as the crow flies' from Bonawe Iron Furnace. 'Nearest' may involve a long drive up and down glens or, if you are near the coast, may include a ferry ride! Please check the property map to make sure the location is right for you. 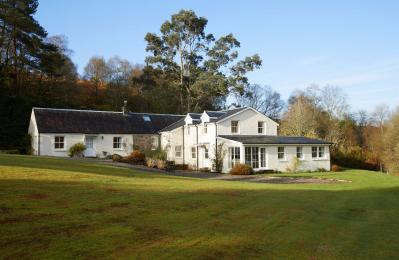 In the most idyllic setting is Port na Mine, a very special holiday home with breath-taking views of Loch Etive and Glencoe beyond and its very own track from the …
Sleeps 12 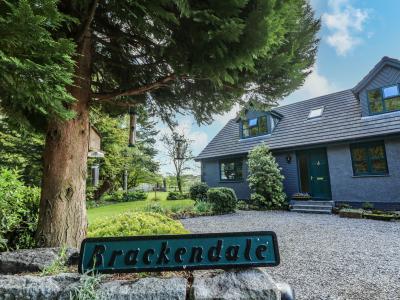 This first floor apartment is situated in Taynuilt, Scotland and can sleep four people in two bedrooms.
Sleeps 4